An Archival Summer in the Similkameen 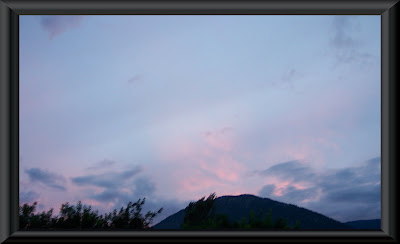 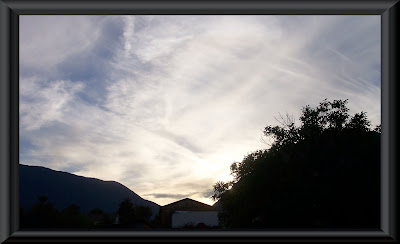 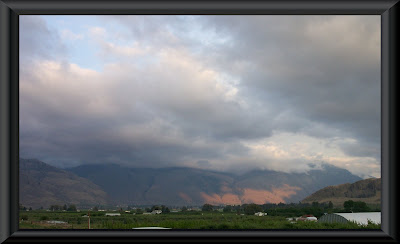 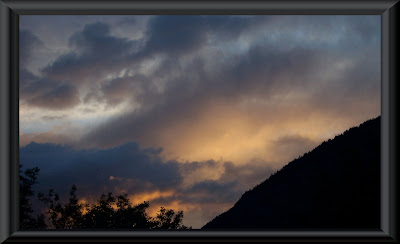 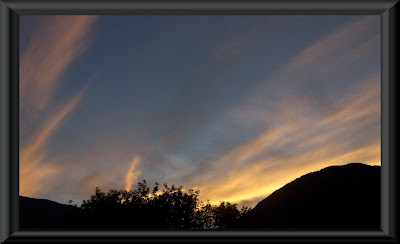 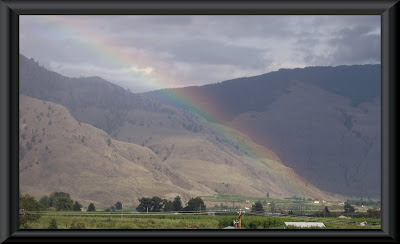 Look at all the lovely skies from around the world by clicking here.
Posted by Hildred at 6:58 PM 14 comments:

D is for Drumheller and Dinosaurs

Drumheller and Dinosaurs go together like bees and honey. The town is located in the Canadian Badlands of southern Alberta, and the bones of the dinosaurs that once roamed here dream on in shallow graves, a hip bone sticking out here, a long bony toe searching its way out of the ground and massive footprints preserved for thousands of years.

Drumheller is named for Colonel Samuel Drumheller. The Colonel bought land a hundred years ago, in 1910, and started mining operations in 1911. Here he is in his Cadillac. 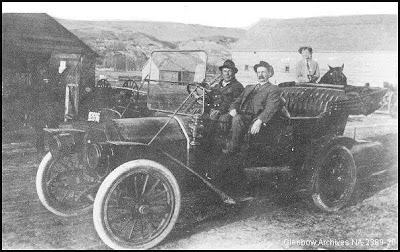 During the time when Coal was King Drumheller's population was more than 30,000 and it became a city in 1930. Now it contributes to a vibrant energy sector and has Alberta's second largest natural gas deposit, the West Drumheller Field.

In 1997 Drumheller dropped its City Charter and once again became a town, amalgamating at the same time with fourteen old adjoining residential mining communities.

The great deposits of coal in the vicinity led to the establishment of The Royal Tyrell Museum in Drumheller. While surveying for coal deposits Joseph Burr Tyrrell found the first dinosaur - a 70 million year old Albertosaurus. In 1985 the Museum was opened and is the only museum in Canada devoted to 4.5 billion years of the Earth's history. In the Dinosaur Hall a T-rex towers over a display of some thirty-five complete dinosaur skeletons. 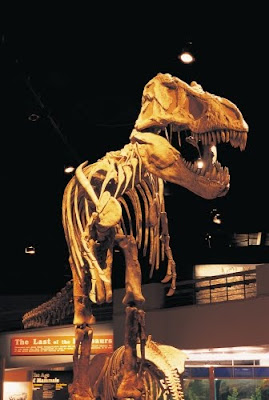 You can go here, and here to learn more about this wonderful Museum, and about taking part in a dinosaur dig in the badlands surrounding Drumheller. 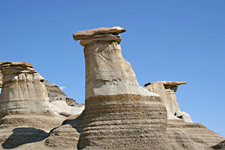 Within these Badlands is a wonderful natural amphitheater and each year for six days in July a dramatic portrayal of the life, death and resurrection of Jesus Christ is presented in the form of a Passion Play. In 2009 over 12,000 people attended this event. 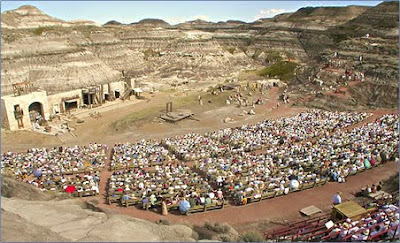 When we visited Drumheller ten years ago we were impressed with the Royal Tyrrell Museum, but moved to tears by this presentation. The acoustics are beyond splendid; the music and sets and costumes and the performance of the hundreds of local volunteers is remarkable and one can feel the spirit and heart and passion that is put into it. It is a three hour performance, with a twenty-minute intermission, but to the audience sitting on bleachers (take a cushion) it was absorbing and time passed almost too quickly. 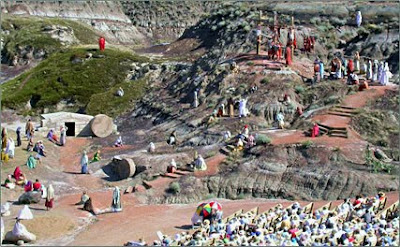 For more information and entertaining D's visit ABC Wednesday here.
Posted by Hildred at 11:31 AM 12 comments:

Caspar and I went out for a short walk this morning, just before we left for church.

Half way down the lane was a robin, - yes, truly. A Robin! A quiet friendly robin, - it didn't go flying away in a panic at our approach but loitered along the lane, looking a little askance at us, but quite content to stay put.

Of course I didn't have the camera with me, and we turned and came back before the little fellow became alarmed. I have to say it made my heart leap a little to see him, so early in February. 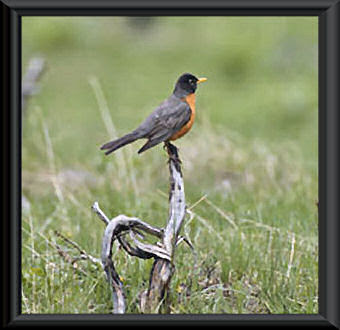 This is a picture of a robin, courtesy of the Internet. Probably a cousin of our solitary visitor.

We had a little nap after lunch and then took the camera and went off in the car to visit with a friend. What a lovely mild day it was, and although we didn't see any more robins we did enjoy some veiled sunshine. 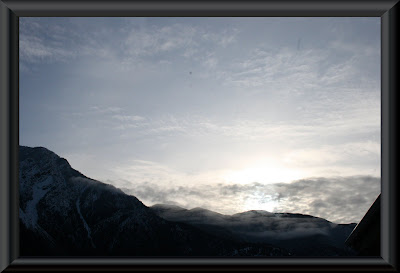 As we turned into the driveway on our way home I was surprised to see that the pussy willow tree at the big house was clad in small, furry, silvery buds.

Stop, stop, I said to that intrepid driver, and he did, and I got out with the camera and took a picture or two, feeling more than elated. 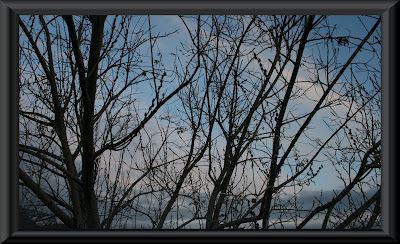 The picture is dark, and the buds don't show well on it, but the blue of the sky makes a beautiful background for the dark branches.

I cherish a child of this tree, planted out in the meadow, and when we reached home I quickly went to investigate. Sure enough - here were more pussy willow branches.... 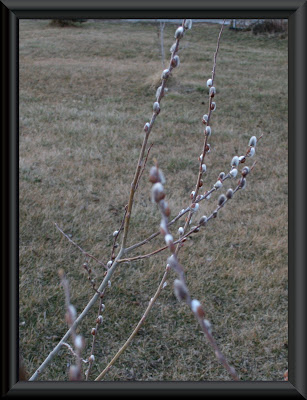 As we came up the driveway the sun was just slipping behind the mountains in the south-west and there was a lovely splash of pink across the blue sky. 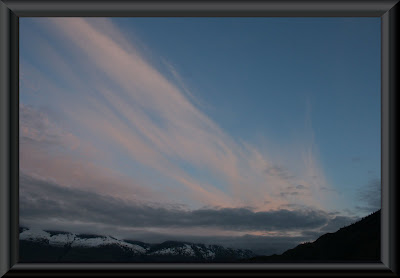