The Darling Buds of May

"Shall I compare thee to a summer's day?
Thou art more lovely and more temperate.
Rough winds do shake the darling buds of May,
And summer's lease hath all too short a date." 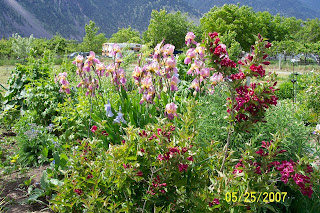 The darling buds of May have had their share of rough shakings this year, as the wind blows day and night, - night and day! Even as it was in Shakespeare's time, indeed!

But a stroll in the garden tonight revealed their sturdiness, and finds us on the edge of great and glorious bloom.

The delphinium, the lupine, the coreopsis, the shasta daisies and the peonies, - all in bud, - but the roses are showing faint shades of colour, and are preparing to bust out all over.... I know, I know, - it's June that busts out all over, but somehow I think a few more warm, sunny days will bring the calendar forward and by the first of June the garden will be a riot of colour and bloom.


Here are the Lambs' Ears, soon to be decorated by a mass of small lavender flowerettes. 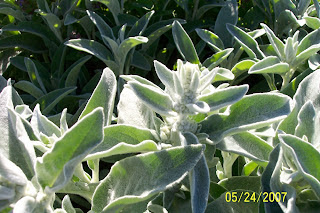 And the Oriental Poppy, pregnant with the scarlet beauty of delicate paper thin petals. 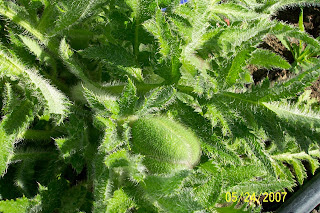 The Lupines will soon stretch their cones into salmon pink and purple torches, before the ubiquitous aphids assail them, - which they do every year..... 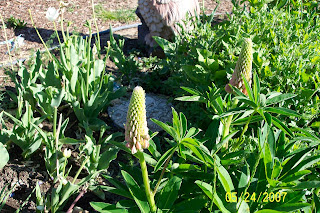 Already the pretty Prairie Princess Rose bush has had it's first bath with Safer's Soapy Spray to rid it of the dreaded white fly. It would appear that nature has no favourites, but she has endowed the rose bushes with the promise of endearing bloom. 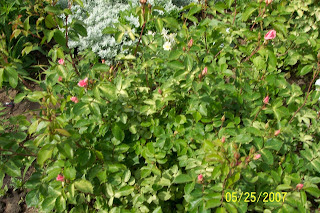 The Philadelphia Orange which No. 3 Son so kindly and carefully transported from the Lost Garden is preparing its fragrant white bloom to delight as one brushes past. 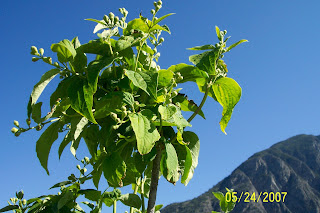 An early Borage, blooming with tiny, heavenly clear blue blossoms, while I frantically thin the thousands of little plants that spring up around its base. 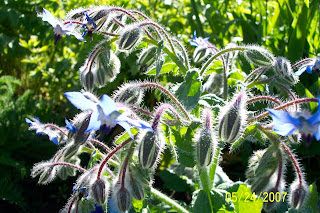 Even the unrepentant Yarrow, which is also being so thoroughly thinned, prepares to blossom and bloom and make its way underground to the next host plant it feels inclined to set up housekeeping with...... 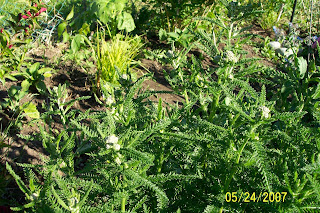 The pink climber by the house is gaining on its battle with the gravelly soil and we think it will take to climbing the trellis and fulfil our dreams of a rose covered cottage.... 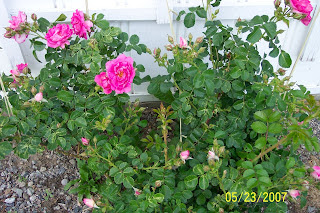 Husband is not too fond of Hollyhocks, but for me the plant evokes many happy memories of childhood, as they grew along the side of the house I grew up in. I do not enclose a picture, as he has not yet noticed the enormity of the buds, and they may blossom and capture his heart before he does....... 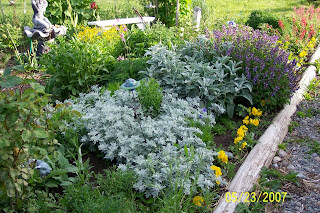 The pinks, which intertwine with the silvery grey growth of the artemis will soon lend their spicy fragrance to the evening air.

The lavender is reaching long silvery stalks into the air - the delphinium, reaching even farther, shows blue, pink, lavender and white blossoms about to open. The Coreopsis , the peonies and the Shasta Daisies are still tightly budded, but the weigelias are tentatively opening their carmine and pink blossoms.

There is something quite sexual about May in the garden, - it corresponds to youth, and the sweet discovery of the joys of love It is no wonder it is referred to as the "lusty" month by many of the early English Poets, - perhaps even more directly by the Later Poets? Certainly by the ancient Persians.....

Come, fill the Cup, and in the Fire of Spring
The Winter Garment of Repentance fling:
The Bird of Time has but a little way
To fly--and Lo! the Bird is on the Wing.
- Omar Khayyám

Posted by Hildred at 9:30 PM No comments:

Labels: darling buds of May 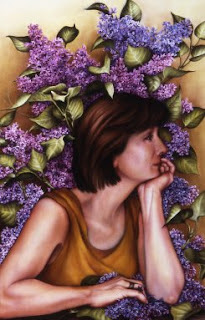 Nostalgia - a malady that prevents progress on the current picture project; main symptom is a raising of the melancholy level, counteracted by an excess of tender smiles and endearing memories. The condition can be brought on by surrendering to sentimentality OR by a realization that one is getting quite antique, and still the pictures of a lifetime remain in numerous boxes, unsorted, unmarked and in no condition to be left behind when we catch the Express to the next destination.

It may occur to the patient suffering Nostalgia brought on by this last condition that all could be remedied by intensive sorting, marking, scanning, filing, and distribution to those interested.

However, to those of creative bent this sounds like a very mundane and tiresome task. How much more exciting to hand these pictures down in the form of a slide show, a power point presentation, or wait! Why not a movie!!!!

Marvelous idea - but the reality is that to accomplish this creative cure one must still undertake the intensive sorting, the marking, the scanning, the filing before starting on the fun part of this creation. The actual movie, - which I have discovered needs constant revision, editing, and is better tackled in Reels - can also bring on re-occuring attacks of the very condition it is supposed to cure.

So here I am this evening, wallowing in Nostalgia, smiling tenderly at pictures of children and grandchildren, New Year's Eves spent with dear friends, trips, anniversaries, birthday celebrations, even Husba 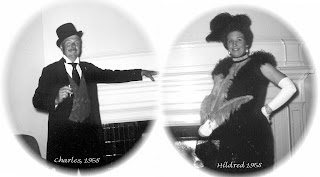 nd's semi coming around the bend on a snowy day, - pets long gone, and dear ones who we will never see again, - places we will never re-visit, activities which were once so much part of our lives.

Is this a case of the cure being as bad as the malady itself. I ask myself.....

Ah well, if so, it is a pleasant way to while away a few hours, and surely the Express is not leaving all that soon, - there will be other evenings to scan and sort and mark and drift into another attack of blue, blue Nostalgia.

This comment has the Hallmark of Procrastination, but that is another underlying cause of the Nostalgia that now assails us!!!

Posted by Hildred at 8:03 PM No comments: