For many years their were six of us who went for lunch every Thursday.  Everybody arrived under their own steam, and had anecdotes from a busy life stored away to show and tell. 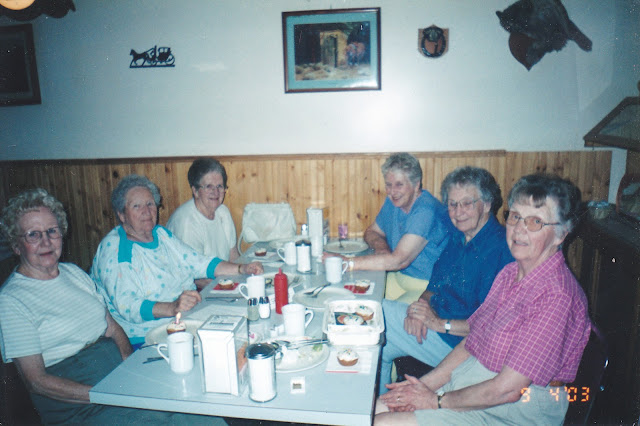 Gwen was the first to leave.  She had been our neighbour for forty years when we lived on the farm.  The first family to move into their unfinished house on the Veterans' Land project, and before that she rode the school bus with Charles, - a neighbour of his on the benchlands of Penticton all during their growing up years.

Except for Joan we had all been participants in that great adventure on the Cawston Bench;  wives of the Veterans; bringing up our children on the orchards and farms we had established after the sage brush had all been cleared from the land.

The years passed.  Not so much was happening in our lives.  Some lost husbands.  Small strokes took their toll from vibrant lives.  After awhile our lunches were not always weekly affairs, as it became more difficult to  gather when some had lost driver's licenses.

Five years ago Alzheimers stole Joan from us, leaving us with only her sweet smile, but still we lunched at least once a month, until she left us for peaceful parts and heavenly places a few months ago.

Now there are only four of us. I am the only one who drives, and nobody gets out much, so after we have lunched  (a pale echo of what past lunches were, but still blest with precious friendship) we go driving.  And that's what we did this past Thursday.

We don't have to go far.  Perhaps we visit Ginty's pond and the heritage park in Cawston, built in the days when we were young to honour B.C.'s Centenial Year.   Or we go west, traveling the riverside road that goes towards the Ashnola, as we did on Thursday.

The day started of with blue skies, sunshine and cool breezes, and so I phoned around to see who would like to lunch, - oh, yes!!  Everybody was eager.  If you are more or less confined to the distance you can walk, then an invitation to go further afield is always welcome.

We took a turn around the Upper Bench to see all the news houses, and the new subdivisions, and all the old houses, and the places where familiar people live (or lived).  Then we were off down the highway and across the red bridge........ 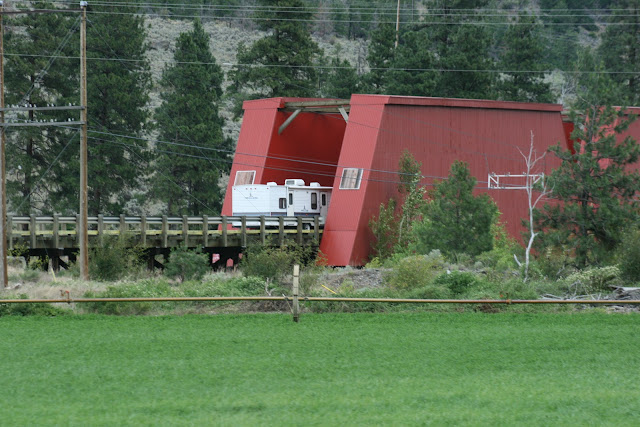 The river was still high, and we didn't see any Inner Tubes on the water, but as we stopped to take a picture
we spotted kayakers on a far bend.   They seemed to be all tied together, - a colourful sight with yellow safety gear and a variety of coloured boats.  As they drew closer, led by a couple of guide canoes, the sounds of laughter and excitement  floated upstream, as a stretch of rapids came into view. 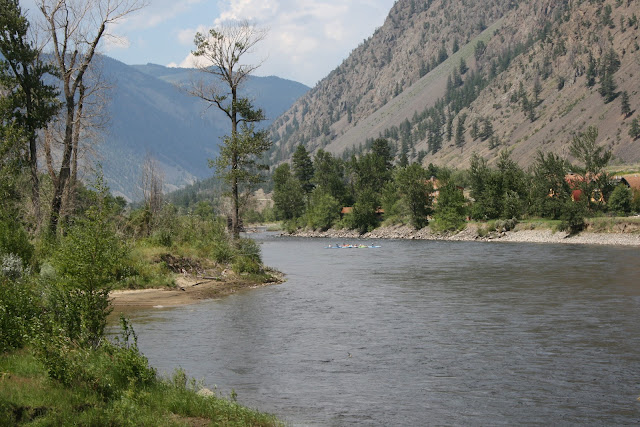 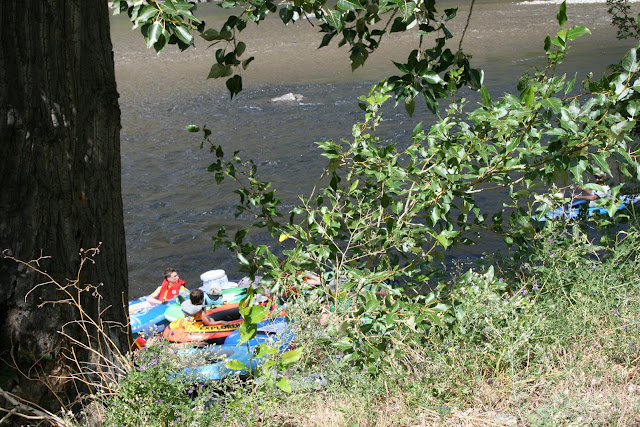 As we headed back towards town  thunderclouds were gathering in the west, although the sky was still blue, but down from the south we were being approached by dark clouds and the occasional rumble of thunder, the quick and distant flashes of lightning. 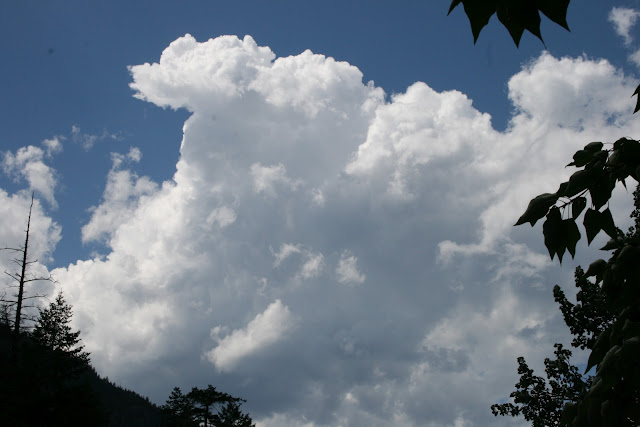 As I returned Margaret to her residential facility the first large drops of rain began to fall, and there was a great and mighty clap of thunder.  Home was only two blocks away, but by the time I arrived we were in the midst of a cloud burst and Callie, wide eyed and frightened,  had found a hiding place to wait out the storm.


I don't bemoan the frequent showers and storms or the lack of devastating heat - the roses have loved this cooler season, but Hazel's geraniums, which are usually spectacular, are really sad and pouting...... 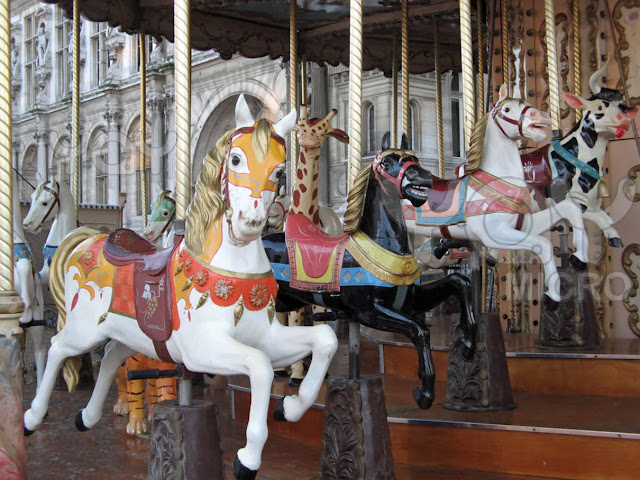 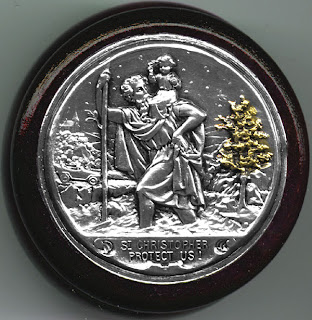 Besides it being St. Christopher's Day, the Feast of Saint James the Greater, Thread a Needle Day and Carousal Day (that appeals to me most.... it has been a day of sun and showers, gentle breezes and stormy west winds.


We took advantage of a beautiful morning and Charles went off on his electric cart to see who was having coffee at the Seniors' Centre, where all sorts of matter are discussed and settled, old tales repeated, and even a bit of gossip finds its way into the conversation.

I wandered out into the garden and admired the new flush of roses, the second bloom on the Canterbury Bells and looked for bees among the Bergamot. 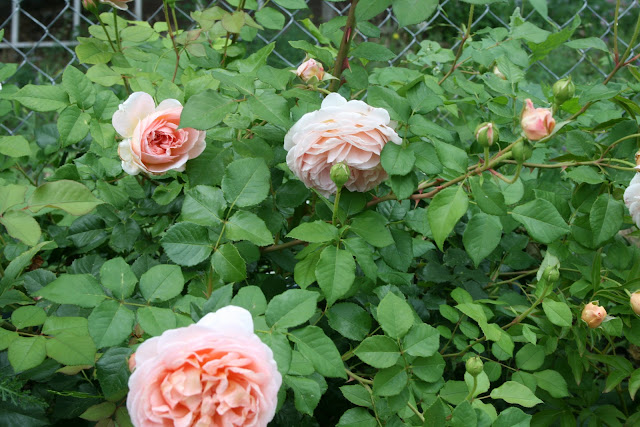 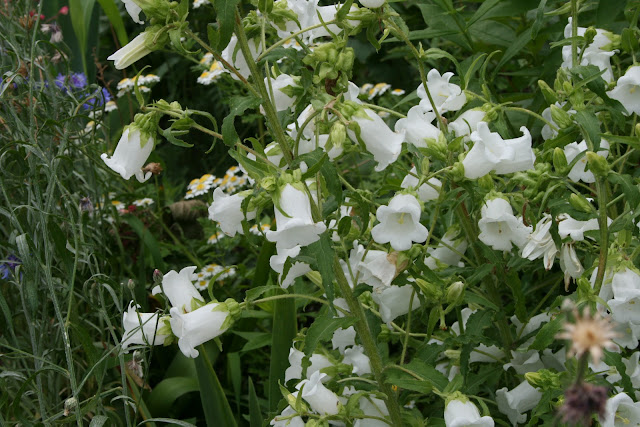 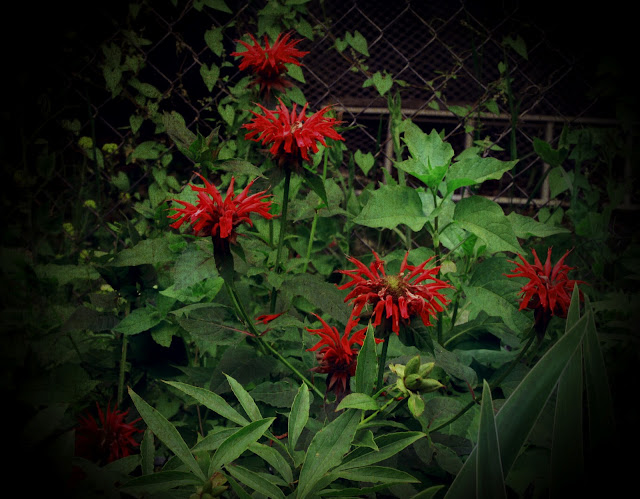 At this point in my conversation I discovered when I posted  that Blogger was up to its old tricks, framing all my text with white and making it impossible to read.  When I tried to change the colour of the font somebody got really nasty and upset and snatched all my lovely words away......deep sigh!


What I told you about was mainly the weather, and how Callie the Cat disappeared to find safety and solace under the sofa, only coming out when the angry Sky Gods had stopped rolling thunger and flashing lightning at her.  And that in response to me scraping that delicious-cat-food into her dish.


And I wanted you to know that the Temptations ad is not to be believed, - the one where the cat leaps high fences and tall buildings to get home  to the rattle of the Temptation package.  T and L will trump that any stormy day.


The weather also played havoc with the television, losing the signal just as the weather report was to come on, - just at the end of Upstairs Downstairs (which they are replaying again) and half way through Suits, causing us to lost the thread.


And that reminded me that today was also Thread the Needle Day, which I found had two interpretations.  The literal one for sewers, of course.  But also the term denotes the ability to negotiated controversial subjects without giving offense or making peers or constituents angry.  I didn't know that, but can see it would be as good talent for any number of people to possess in any number of sticky situations.


I am also reminded that St. Christopher is the Patrom Saint of Travelers, and so I say a small prayer for all those who are out on rain swept roads, with thunder and lightning and wind combining to make travel difficult for them!


I am off to bed to see how much Emily Donahue I can read before falling asleep....and hope that this ;posting is readable. 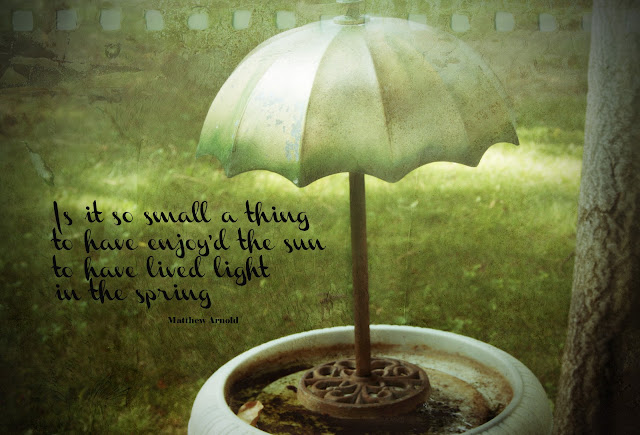 Follow the Texture Tuesday link in the sidebar for a beautiful variety of photos.
Posted by Hildred at 7:59 PM 10 comments: