ABC Wednesday
The letter is G for Guitarist 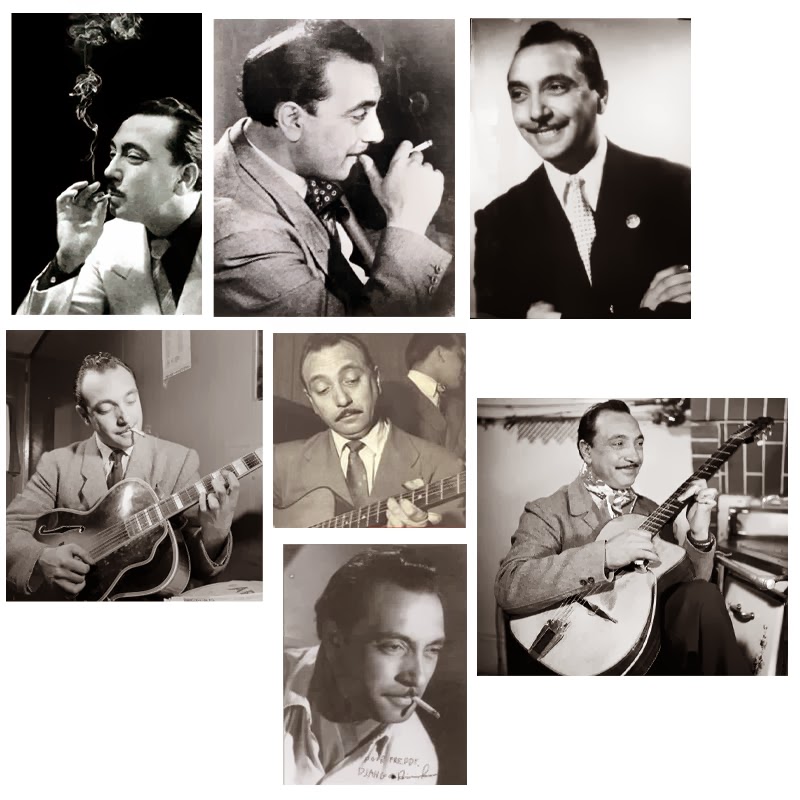 The famous guitarist shown here is Django Reinhardt, (1910-1953)  born at Liberchies, Belgium into the rambling lifestyle of his gypsy parents.  Django grew up 'in a world of contradictions, one foot in the bustling big city of Paris and the other in the age-old life of the nomadic gypsy'.

When he was twelve he was given a banjo/guitar by a neighbour who had notice his interest in music and he was soon astounding adults with his ability on the instrument.  By the time he was thirteen he began his musical career playing with a popular accordionist at a dance hall on the Rue Monge.

In 1928, at the age of eighteen, Django was in a devastating fire in the caravan he shared with his wife.  He was bedridden for eighteen months and the fourth and fifth fingers of his left hand were permanently curled towards his palm, due to the tendons shrinking from the heat of the fire.  He took his convalescing time to devise a new technique of soloing with only his index and middle fingers, a graceful and precise technique that is visible in the bottom right hand picture above.

He went on to have an amazing career with The Quintet of the Hot Club of France, formed with a fellow guitarist Stephane Grappelli.  They were playing in England when war broke out.  Django returned to Paris, and somehow managed to survive the war, avoiding the fate of many of his kin who died in Nazi concentration camps.  After the war he was reunited with Grappelli and toured briefly with Duke Ellington in America.

On May 16th, 1953 Django suffered a massive brain hemorrhage and died.  His music remains as vital and exciting today as when he lived, a truly great guitarist and one well loved amongst all my family.

One of Charles' favourites

and one of mine

for more great Gs visit here at ABC Wednesday, with thanks to Roger and Denise.

http://abcwednesday-mrsnesbitt.blogspot.ca/
Posted by Hildred at 10:07 AM 13 comments: