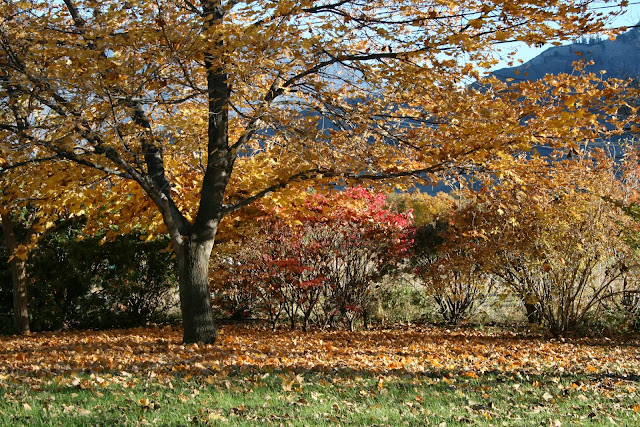 Another year gone, leaving everywhere
its rich spiced residues; vines, leaves,
the uneaten fruits crumbling damply
in the shadows, unmattering back
from the particular island
of this summer, this NOW, that is nowhere
except underfoot, moldering
in that black subterranean castle
of unobservable mysteries - roots and sealed seeds
and the wanderings of water.  This
I try to remember when time's measure
painfully chafes, for instance when autumn
flares out at the last, boisterous and like us longing
to stay - how everything lives, shifting
from one bright vision to another, forever
in these momentary pastures.
Mary Oliver   Fall
Posted by Hildred at 8:16 PM 6 comments:

The letter is O, for Oscar de la Renta 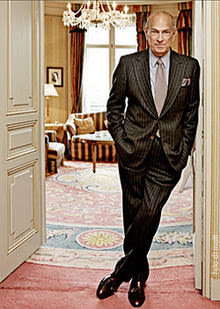 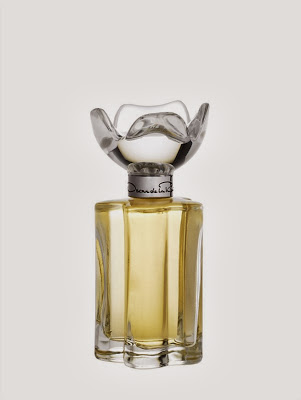 What I knew about Oscar de la Renta before I started a little research was his Eau de Parfum,  which I loved in younger days, before I made Crepe de Chine my 'signature' scent, - in the days when a faint perfume was pleasing to people as they brushed past you, before so many people began to throw up their hands in horror and complain about their 'allergies'!

And doctors and dentists and optometrists and even chiropodists put up signs saying 'No Perfume, No Perfume - we are pure in this office and will not be seduced by your Eau de Parfum'.

I know of a lady who changed churches because she was so outraged by the faint perfume a fellow  lady
pew sharer refused to give up when she got dressed for church.....good for her, (the lady) say I....  I'm not sure what the outraged parishioner's thoughts were on after shave lotion....

This particular Perfume, pictured above, is L'Esprit de Eau de Parfum Oscar de la Renta.    Its 'Base' is Heliotrope, Muskt, Tonka Bean, Vetiver and Amber.  The 'Heart' is Egyptian Jasmine, Orange Flower, Tuberose, Parma Violet and Iris, and it is 'Topped' with Sicilian Lemon and Cedrat.

Who could object to such a lovely potpourri  - in moderation,  of course.

Oscar de la Renta left his native Dominican Republic when he was 18 to study painting in Madrid, and while living in Spain he became interest in the world of design and became apprenticed to Balenciago, Spain's most renowned couturier.  In 1963 he came to New York to work with Elizabeth Arden, and in 1965 began his highly successful signature ready-to-wear label.

He has received many awards in the industry and from his native country he has been honoured as one of its most distinguished citizens with the order al Merito de Juan Paqblo Duarte and the order of Cristbal Colon.  In 1996 he received the Lifetime Achievement Award from the Hispanic Heritage Society and in 2000 he marched down Fifth Avenue as Grand Marshall of New York City's Hispanic Day Parade.

He is the recipient of the Gold Medal of Bellas Artes from the King of Spain, and even more importantly he has helped build a much needed school and day-care centre in the Dominican Republic for 1200 children.   As a tireless patron of the arts he serves on many boards of important cultural institutions, and I would say his life has been one of excellent citizenship,  besides his contribution to a sweet scented world.

You will find more interesting O's here at ABC Wednesday, with thanks to Roger, Denise and all their visiting helpers.