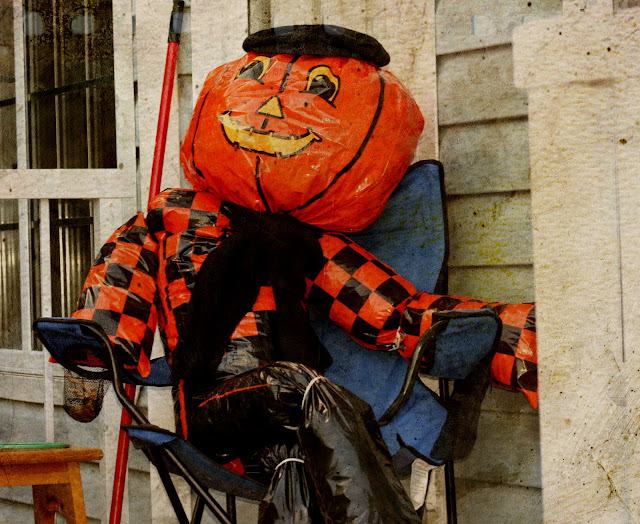 It is time to take the dried leaves out of the pumpkin man and fold him away for another Halloween.  He did yeoman duty, greeting the little princesses (a plethora of them - or was it a bevy?) and the frog that accompanied one of them - the witches and the ghosts, a warrior from space and a bluetailed dragon.

As soon as the day warms up we will scrunch up the leaves and spread them on the newly planted flower bed in the back garden.  November is being very gentle with us, so far.  Well, yesterday he fell prey to temptation and sent a rather strong and chilly wind to remind us he is on his way down the hills and into the valley, but on the whole there is a little period in the middle of the day when it is a joy to be outside.

It is true that November is rather a dreary month, but there are two ways of enduring it.  Cyril Connolly, an English author and a bright positive fellow, says that 'fallen leaves lying on the grass in the November sun bring more happiness than the daffodils' 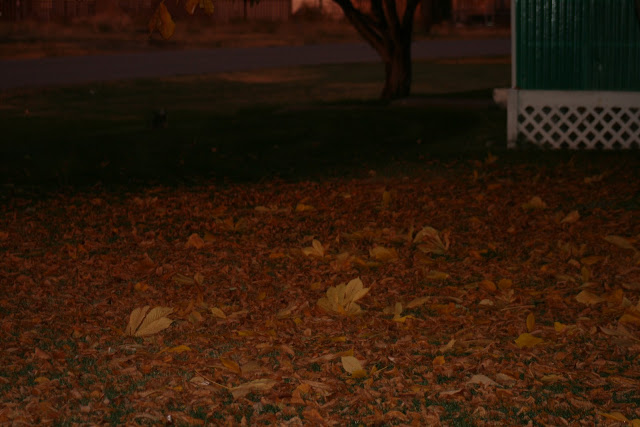 while T.S. Eliot bemoans 'since golden October declined into sombre November / And the apples were gathered and stored, and the land became brown sharp points of death in a waste of water and mud.........'  Eliot can be quite miserable.

I will go with Cyril this day.  The sun is just above the horizon and the clouds are shining silver  above it.

It looks like a perfect day to muck about!!!

P is for Paderewski 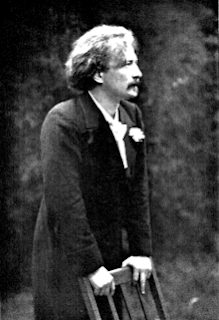 and here is Ignacy Jan Paderewski playing Frederic Chopin;  a Nocturne, A Waltz and his beautiful Etude in A Minor, Opus 25/11

Paderewski was a famous Polish pianist, who from his early childhood had a great interest in music.  He
made his musical debut im Vienna in 1887 and his brilliant playing inspired extravagant praise both in Europe and the United States.

During World War 1 Paderewski became an active member and spokesman of the Polish National Committee and in 1919 he became the Prime Minister of a newly independent Poland,and subsequently the Polish Ambassador to the League of Nations.

In 1922 he retired from politics and returned to his musical life, touring the United States
in a private railway car with great success.  He was a wit, and a raconteur, and he once recalled "I established a certain standard of  behaviour, that, during my playing, there must be no talking.  When they began to talk I would stop.  I would say 'I am sorry to interrupt your conversation.  I deeply regret that I am obliged to disturb you, so I am going to stop for a while to allow you to continue talking'.  an effective ploy.

Paderewski died in 1941, still touring, still delighting his audience with his brilliant playing......