The letter is F for Fiddlehead 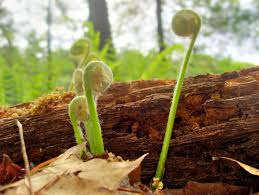 Chock full of vitamin A and C fiddlehead greens are a nutritional powerhouse rich in antioxidants, and a great source of fibre and omega-3 fatty acids.  The furled fronds of a young fern, the fiddleheads are harvested early in the season before the frond has opened and are cut fairly close to the ground.

Over-picking will eventually kill the plant, and it is important to maintain sustainable harvesting, whether you are growing them commercially or out in the woods  where it is damp, and the ferns grow freely. 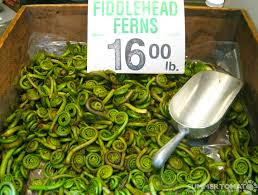 Fiddleheads have been part of traditional diets for centuries in much of France, across Asia, and among Native Americans.  With a flavouring similar to asparagus this springtime veggie goes well in soups, salads and pastas - and quiche too!

Bring some potatoes, celery, onion, water, stock and salt and pepper to a boil, - cover and simmer about twenty minutes or until veggies are tender.  Add fiddleheads and simmer until they are tender too and you have a nice creamy fiddlehead soup. 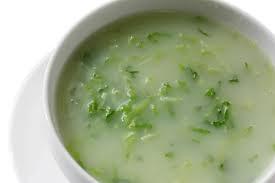 Of course there is a Band, too that is called Fiddlehead Soup, - one which has a delightfully unique sound well known in the community in which they play (in eastern Ontario, Canada)

Fiddlehead Soup sings and plays English, Scottish, Irish, French, Spanish, Icelandic, Finnish, Northern Sami, Uyghur and Italian music, as well as their own compositions.  (I am not familiar with Uyghur music, but I plan to listen and discover..... 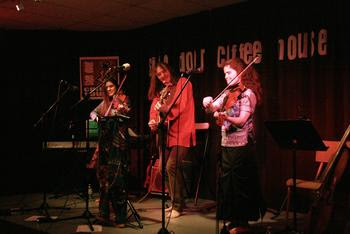 There is also a well known Canadian Literary Magazine called The Fiddlehead,
and a Radio Pod Cast associated with it, both of which can be
found online.

For more interesting Fs click here to visit ABC Wednesday,
with thanks to Roger, Denise, Leslie and those helpers who frantically visit
the contributors to ABC Wednesday each week.