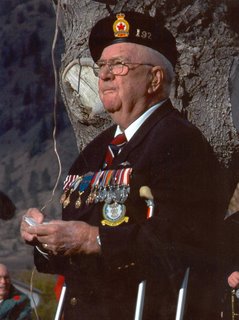 Tomorrow Husband will once again read the names of the Fallen from this Community - those who gave their lives in the First World War, the Second World War, and the Korean War. In a neighbouring town someone else will have this honour, and the names of the Fallen there will include the names of Husband's two brothers, who were killed within six months of each other in France and Holland. There is a sharp sense of loneliness in a lifetime lived without that close comradeship between brothers.

This morning my niece sent me a video of the Juno Beach Academy ceremony at the Field of Honour in Queen's Park Cemetery, Calgary, where more than five thousand veterans are buried.

Under grey skies and in blowing snow, students from the academy marched to the Field of Honour to remember their comrades. The Piper and the Drummer leading them were my niece's sons, and close behind in the Division was her daughter. The Bugler who played the Last Post and Reveille was the Piper's girlfriend.

I watched the video through tears (hopefully you can too, by going to the above website).

The respect and understanding shown by these young people helped to counteract the disgusting suggestion I have heard in the last few days that Remembrance Day become a moveable "holiday" so that it can always provide a long week-end! Shame to those who do not observe the 11th Hour of the 11th Day of the 11th Month to honour those who died to maintain the freedom they enjoy, and often abuse.

My father was wounded at Cambrai on the 11th of October, 1918. When I was a young child, between the two Great Wars and still in school, Remembrance Day was not a holiday. However, at the 11th hour of the day all commerce ceased, and wherever one might be the two minute silence was observed in memory of the sacrifices made in that most horrible of wars, fought in trenches and mud and with bloody persistence and valour. 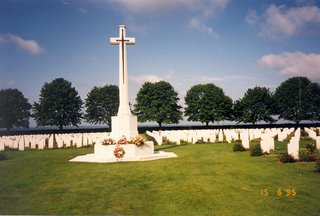 The cemetery at Brettville sur laiz where Tom is buried, - near Falaise where he was killed.


In 1995 Husband and I visited the cemeteries at Groesbeek and Brettville sur laiz. From my diary of June 20th, 1995 - "Went out towards Groesbeek, and stopped in the town..... Then we went on to the cemetery, - had lunch there, picnic style, and spent a couple of quiet hours. Charles asked one of the attendent gardeners about putting the remembrance plaque on Gordon's gravestone permently, and got permission to do so - so he did, with the epoxy glue he had brought from home. We took some more pictures. It is so quiet, and peaceful, - the birds were singing, and it broke my heart to think of three thousand young lives sacrificed in these peaceful fields." 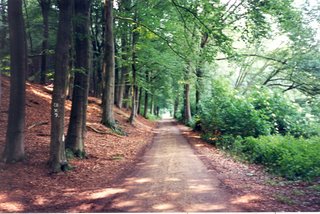 The Moyland Forest, on the German border


and the grave of the brother who is buried at Groesbeek. 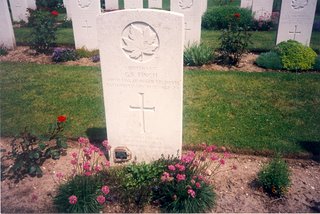 During the past week Husband has been in touch a number of times with a reporter who was interviewing him as a veteran and as a Lancaster Pilot. The stories he related about his experiences with his crew were interspersed with many passionate political opinions, but when the paper came out today we were pleased that the reporter had done an excellent job of sorting out the factual experiences from the philosophies which he has accumulated during the 61 years that have passed since his discharge from the airforce.

Time passes, but the memories of those who lived at the time of these wars remains vivid.

Time passes, and for many these events are something that happened in the dim and distant past, long before they were born.

It encourages me to note that the young are being made aware of the sacrifice of so many thousands who literally "laid down their lives" and I am encouraged that the stores now close on Remembrance Day.

Such a small thing to show gratefulness and respect most especially on this one day, - and to feel those same emotions in our hearts, each and every day of our lives.

An overly emotional post perhaps, but my comments on a day that we view reverently in our family. "In Flanders Fields" is joined by "O I have slipped the surly bonds of earth", and a heartfelt prayer of gratefulness for valour, and hopefulness for peace.
Posted by Hildred at 4:56 PM No comments:

Yesterday Husband and I went to Penticton, - he to speak at a Remembrance Day event, resplendant, with medals all shined and his mind attuned to the points he wanted to talk about. He is a man of passion, and when he speaks of those things which he values greatly he sometimes walks on the edge of a political precipice. One never knows when he might lose his footing a little and digress to another point carrying political overtones that excite him to express deeply felt opinions! It's a risk we must all take when he is asked to speak!!!! Ask anyone who has ever interviewed him.....

I went along for the ride, and what a splendid drive it was over the pass into the Okanagan Valley. The skies were dour, but the hills glowed with a wonderful luminence.

The fall grasses dotted the hillsides with gorgeous patches of naples yellow, covering the small benches. Along the roadside the grasses were longer and more varied, - shades of orange and gold, with hidden spears of green. The small red shrubs that hug the rocks are indescribably soft and range in shades from pinks to wines. Words fail to express the wonderful feeling of quiet mystery that shrouds the mountain with these suble earthy colours. Unfortunately we were late getting away, which made picture taking impossible, and when we returned the sky was pouring buckets of rain. Perhaps we will be lucky enough to meet that same combination of sky and hill and colour the next time we go, but for now it is a picture in my mind that I remember as being wonderfully relaxing as we hurried to make up time and not be too late. 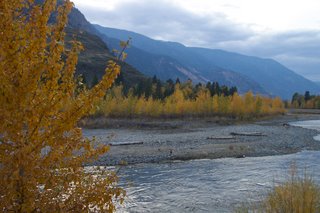 On Sunday a "Chicken Little" Lady bemoaned the lack of water in the riverbed, foreseeing this as a sign of the climate change that threatens to devastate us. On Tuesday the river was brim full with all those wonderful buckets of rain that come in the fall to feed the thirsty trees and plants as they go into dormancy.

I think you have to live long enough to experience earth's cycles of drought and heat and rain and heavy snows, before you can view climate change as natural, and not the fearful disaster that is forecast. Occasionally we are blessed with the perfect June, the most glorious fall, or the most benign of picturesque winters and I do pray that the doom and gloomers take them into account and are thankful for them.
Posted by Hildred at 9:09 PM No comments: