A Wander through the Garden

First came the dawn, lit by a cool, quiet glow while the day prepared to sigh gently and present the first of its gifts. 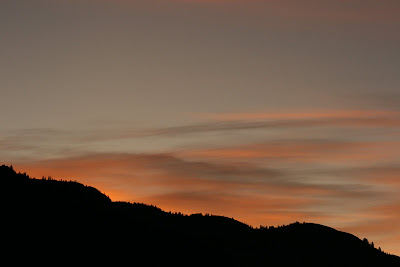 A painterly sunrise and the breakfast bar preparing to open its doors to the small bird population. 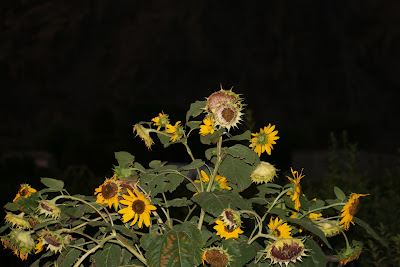 The afternoon was warm and pleasing as I wandered to and fro, considering an ever changing plan for next year's garden, - what needs to be moved, - where can it be moved to, - would it do better here, or there? 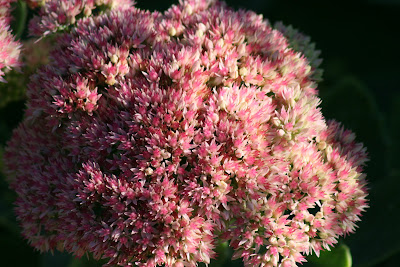 The sedum is perfect where it is, lighting up various parts of the fall garden. 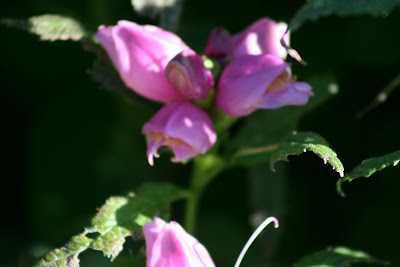 The small Turtle plant was moved in the spring, but it is still being squeezed out by the invasive mint that goes galumphing through the garden, - the solution is obvious. Move the mint, somewhere out against a far fence where it can spread to its heart's content without digging elbows into its mild neighbour. 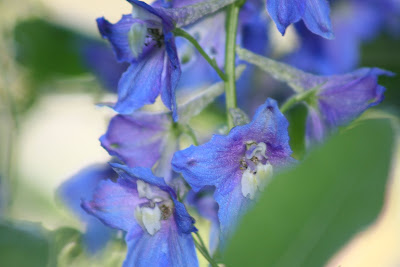 The second blooming of the lovely blue delphinium met with disaster when a wild wind bent the Barn Flower down upon it, breaking its tender stems. Out with the Barn flower, - off with its head. It will have an abandoned beauty across the pasture, waving far into the air against the same fence with the mint! 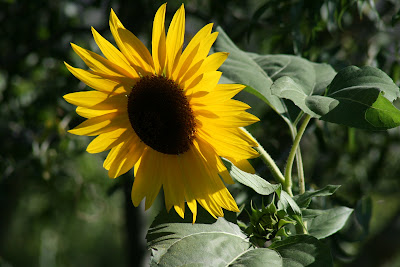 I have nothing to say about the sunflower, - it grows where it will, and we always leave enough small plants scattered amongst the garden to brighten the summer months and feed the small birds in the fall. 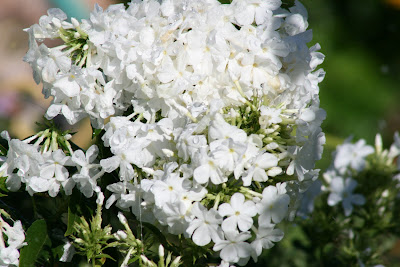 The white phlox is a favourite, but it is side by each with an overgrown day lily and on the other side a rambunctious fall chrysanthemum, - I think they would be lovely candidates for the new garden in Midway that grandchildren are enthusiastically tending....

Well, there is another corner of the garden that is a hodge podge of colour, all blooming in a lovely mosaic of wild grasses, yellow daisies, weigelia, lavender, a clump of chinese lanterns that thought this would be a good place to establish a subway station, a few persistent borage plants, with their ice blue stars. And the Rhubarb.

There is no end to pondering when you are considering the fate of the garden.
Posted by Hildred at 8:55 PM No comments:

The sunset here in the Similkameen on Monday evening was so spectacular I was overcome by a snapping frenzy and took over eighty pictures from twelve minutes after seven until seven twenty-seven. Just like a good evening's fish feed, snap, snap, snap.... oh my!

I chose forty pictures to make a slide show which can be seen HERE. A few pictures from that lovely interlude.... 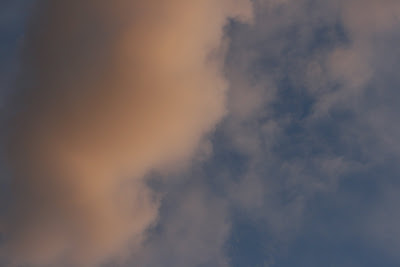 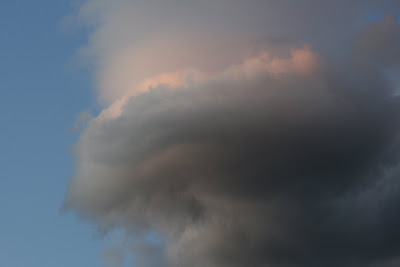 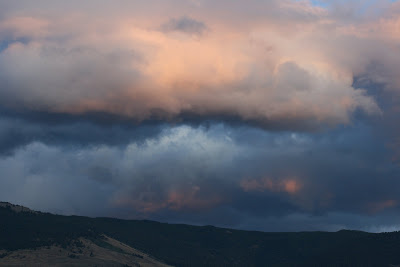 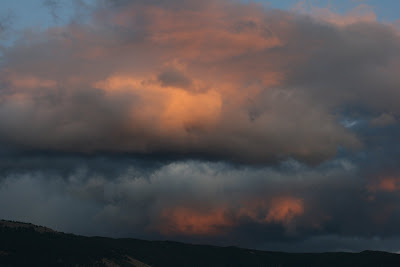 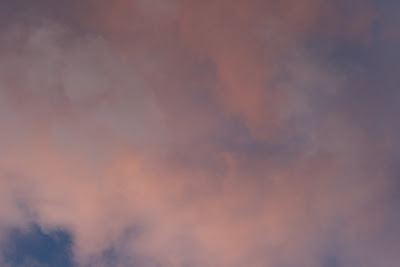 Visit Skywatch Friday by clicking here, and prepare to be delighted.
Posted by Hildred at 4:20 PM 8 comments:

H is for Higgeldy Piggeldy 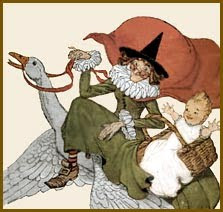 'Many Nursery rhymes of the 16th and 17th centuries featured animals like the Cat, Frog, Toad, Pig, Goose, Raven, Goat, Wolf, Bat and Mouse. This was also the era when people were obsessed by Witches. These animals were associated with witches as their familiars and Mother Goose is often illustrated in the guise of a witch - is there a connection between the Origins of Nursery Rhymes like ' Higgledy Piggledy'and the Witch?'

But hearken to the modern day Higgeldy Piggeldy verses

"The double-dactyl is a short verse form invented by the American poets Anthony Hecht
and John Hollander in 1966. The poem consists of one sentence containing forty-four
syllables that are distributed over eight lines and fall into two four-line stanzas.
The first three lines of each stanza are dactylic dimeter; the last one is a choriamb.
The two stanzas end with a masculine rhyme on the last syllable of the choriamb. The
final feature of the form is found in line six of the poem: a single, six-syllable
word which is a double-dactyl".

Patty-cake, patty-cake,
marcus Antonius
what do you think of the
African Queen?
Gubernatorial
duties require my
presence in Egypt. Ya
know what I mean?
-Paul Pascal

the origins of technology

Uranus, Uranus,
Herschel's discovery
axis inverted, past
Saturn it swings.
Who would have thought that the
antepenultimate
solar constituent
also had rings?
-RP (1987)

Thank you to Denise who hosts ABC Wednesday. Slide over here and see what else H stands for.
Posted by Hildred at 7:46 PM 15 comments:

A few days ago the Weaver of Grass made reference to the migration of the swallows, and posted a delightful poem in which she echoed the questions a young swallow puts to its mother as they prepare for the young one's first migration, and the gentle encouragementin the mother's replies.

I thought about the swallows who inhabited our barn on the farm, and the cliff swallows who build their nests in the clay cliffs of the Okanagan. And my memories brought to mind the nighthawks which were so prevalent in the summers of the years we spent on the farm. All during that 35 years or so, from 1950 to the mid 1980's, after a hot day and when conditions were just right, and when the insects were close to the ground in the evening, the nighthawks would swoop and soar over the road and the farms in great flocks, rejoicing in a veritable feast. The evening shimmered with insect wings and the air whooshed with the sound of their wings.

The nighthawk is not a raptor, as one might conclude from their name, but belongs to the family Caprimulgidae, the same family as the Whip-poor-will, and the swallow. It is about the size of a dove, and their slender shape and erratic flight help identify them in flight.

The nighthawk nests on the ground, but around the 1900's they also adapted themselves to living in towns, and nesting on the flat gravel roofs of buildings.

They generally feed at dusk and during the day they camouflage themselves by stretching out on branches or in bushes. The nighthawks mouth opens far back under its ears and forms a yawning trap to engulf any insects that happen to be out meandering in the early evening.

I realized that it had been a long while since I had seen this marvelous feeding frenzy, - not since we had left the farm in the late 1980's. I knew that nighthawks were quite at home in towns, and often nested on flat rooftops where they raised two chicks each summer, so where were they now?

Off to Google, and I found that there has been a general decline in the nighthawk population all over America. The reasons are not clear, but could include habitat loss, migration hazards, crow predation, and one theory links the bird's decline to the shift from the once common pea stone gravel roofs where nighthawks laid their eggs to roofs made of rubber or polyvinyl. The old style gravel roofs provided perfect camouflage for the bird's speckled brown, grey and white colours, and some protection from marauding crows.

The apparent disappearance from the valley of any large flocks of nighthawks saddened me, but I was encouraged by tonight's pictures of a gorgeous sunset. Off to the north I spied a bird, then another and another. I tried to capture with the camera, but couldn't be sure I had, they were moving so swiftly and erratically.

When I transferred the pictures from the camera to the computer I was surprised and elated to see the silhouettes of the nighthawk scattered across the sky. 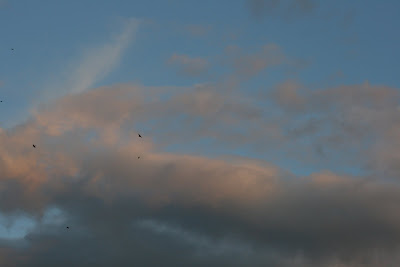 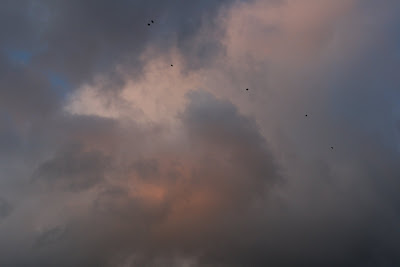 There were only a few, and you may have to click to enlarge in order to see them, but they were there, and I was so grateful for the chance to see them.

It is time for them to migrate. They won't go in great flocks, but they will take off in small bunches, stopping on their way to rest and eat, flying by day and in the evening opening their wide, wide mouths for any resident insects. They have a long migration to Argentina, and the young ones are barely two months old. A long way to go, but think of the scenery....

Google informed me that there are many people concerned about this beautiful bird, and the conditions which affect it so adversely. There are people throughout Canada and the U.S. who watch and record their migration, and most likely are as delighted as I was when their evening watch is rewarded.

p.s. The nighthawk is also known as 'nightjar' or 'goatsucker', having in early days gained an erroneous reputation amongst country folk for suckling the milk from cows and other milk giving animal with their large mouths. But we know better now.....
Posted by Hildred at 9:38 PM 3 comments: