Dinner with family and then on to receive the Queen's Diamond Jubilee medal awarded post humously to Charles for the enormous amount of volunteer work he did in the comunity, and provincially, in the fields of Agriculture and Education and with the Royal Canadian Legion.

Only one of 60,000 awarded, but we were proud and felt it was well deserved!!

We all dressed appropriately, hoping to set an example for the Justin Beiber's of the world who are terribly nonchalant about the whole thing and appear at the presentation in baggy overalls with cap worn backwards!!!  I wore Charles' silver wings on my lapel and carried his cane.

In the excitement the pictures went all blurry, but here is one for the record. 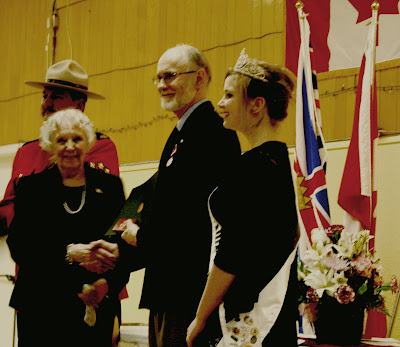 I think that Charles, along with many other veterans, felt a special affinity with the Princess Elizabeth who drove an ambulance while they fought the war in different theatres, - Charles as a Lancaster Pilot.

It is all such a long time ago now, but while he was in the grip of that dreadful and fatal  post-op delirium and it was hard to know what paths he was treading in his mind, Charles sat up in bed and said,  loudly and clearly,  "God Save the Queen", a last thought for a comrade in arms who has a special place in the lives of veterans of the Second World War.

Was he there last night in spirit?  I am inclined to make that great leap of faith that allows me to believe that the soul has a life of its own;  a mystery that will only be made clear when we make that journey that requires us to pack nothing, only go as we are to where we are sent, to paraphrase Mary Oliver in the Epilogue to her book, 'Thirst' (which sits nearby and brings me comfort when I am sad.)

How about the sweet Forget-me-not !! 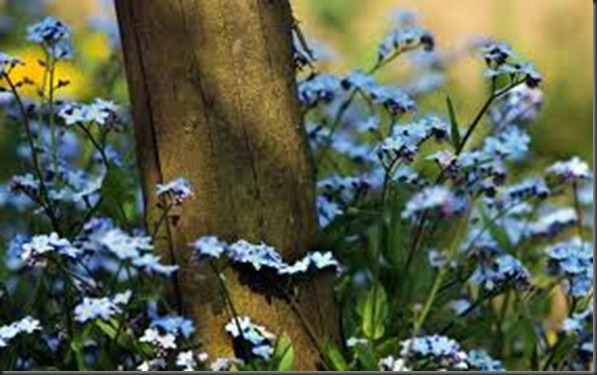 A lovely and appealing spring flower, – a touch of blue sky reflected in the garden among the June peonies and lilies and daisies.

The official flower of the State of Alaska, the Provinces of Newfoundland and Labrador and a poignant choice for the Altzheimer Society.

The Forget-me-not was also adopted by Masonic Lodges in Germany during the Second World War,  in place of the official Masonic crest which was subject to great persecution during those difficult years.

Henry lV  of England cherished the forget-me-not as his emblem after his exile in 1398 and it is said that when God was naming the flowers in the Garden of Eden he overlooked this small blue flower, and as he prepared to leave he heard a plaintive voice at his feet, reminding him that he had forgotten to give it a name.  God said, ‘I have forgotten you once, but I will not forget you again, – Forget-me-not shall be your name.’

The flower stands for loyalty, friendship, love and fidelity, – the only really unpleasant thing about it is that the leaves taste quite nasty, but you weren’t going to eat the leaves anyway, were you?


In literature Tolkein was also drawn to the Forget-me-not and it is associated with Tom Bombadil in his Hobbit /Ring stories.
Henry Wadsworth Longfellow had this to say about it, -
Silently, one by one, in the infinite meadows of Heaven
Blossom the lovely flowers, the forget-me-nots of the angels. 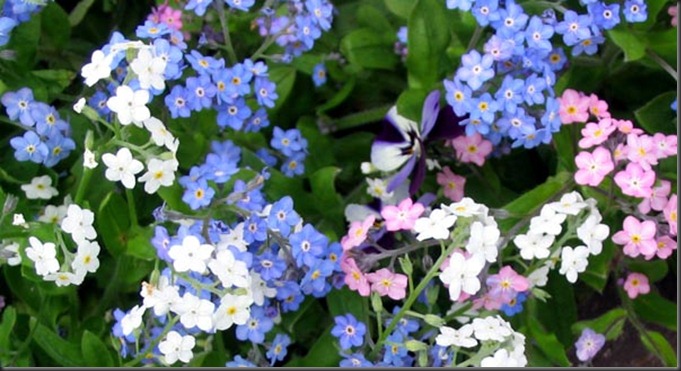 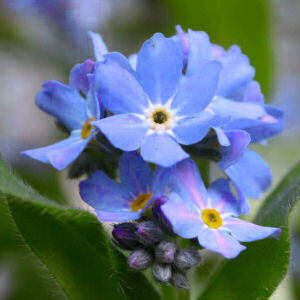 A sweet, romantic boutonniere
For more F’s click here to visit ABC Wednesday
thanks to Mrs. Nesbitt and the unforgettable  Roger
Posted by Hildred at 4:37 PM 14 comments: 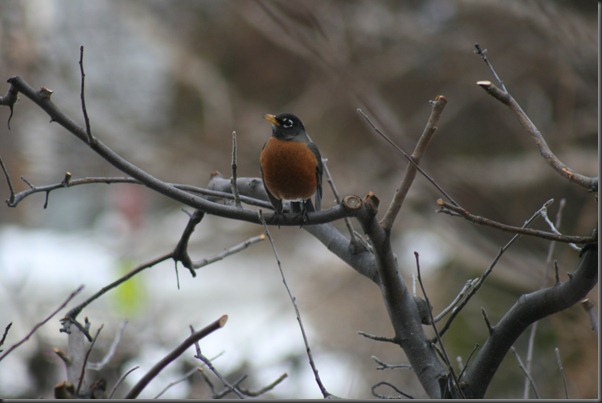 Five merry robins in their scarlet vests, rejoicing in the branches of the Mountain Ash;  the constant drip of the melting snow coming through the drain pipe, softly gurgling  and requiring a vigilant eye to keep emptied the small pail it splashes into;  the emergence of walnuts on the roof next door as the snow gradually retreats from the peak,  and the industry of the Nut Crackers and Flickers as they scoop up the opportunity to fill their little tummies.

And underneath the snow that got piled on the flower bed in the back yard, green leaves, blossoming hellebore, tender bulb stubs reaching upwards, ever upwards.

I bring down my garden diary from the shelf and draft new beds – speak to the minister of the community church who is also the source of wonderful composty  (full of couch grass, alas) top soil from his feed lot, and think about what other peonies and iris and poppies need to be  divided up in the Hillside Garden, and where I will l put them in the new beds.  We shall have an English Garden again!!


Occasionally the sky clears.  The sun travels well above the ridge of the mountain top.   At night the waxing moon is seen through the trees that lie to the west, and sometimes there are tender pink clouds in the east before the greyness envelopes us once again.

I look at the tangled climbers, and wonder who will prune Charles’ roses to his satisfaction, – it will have to be someone who takes directions from ‘on high’, so to speak!


The sweetness of the pussy willow sends me scurrying for the clippers – I clip a few, along with some branches from the red willow, the hazelnut tree, and the japonica, hoping they will add some fresh tender leaves to the winter greenery. 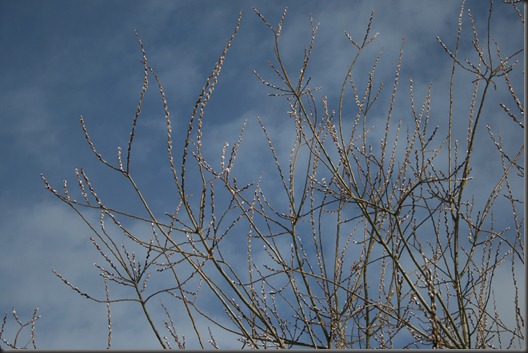 The air is warm and the breeze is gentle, and all this whispers SPRING and is a wonderful, wonderful distraction .
Posted by Hildred at 10:52 AM 5 comments: