This day didn't turn out anything like I had thought it would when I woke at six and immediately rose up to let Bruce out, - he not yet used to the clock being turned back one hour, so that when I get up, even at six, it is probably an hour past the time when he usually goes out and attends to morning ablutions and such!

This morning there was a small puddle of pee and a small brown pine cone like object , along with a small dog looking mournful and saying, 'sorry, sorry, sorry - I just couldn't wait!!!'

Well, that was unexpected - not on my list of things to do at all!  I must stay up later tonight.....

It does take these little ones a while to get used to daylight savings time - their little mental clock has nothing to do with the tick-tock that gets changed back and forth twice a year, and it seems quite reasonable to them to start expecting supper at four o'clock, which would normally be five.

Well, that taken care of, I had breakfast and a second cup of coffee with my daughter and son-in-law who share that early morning delight on the days she is not working.  Once the visit was done  and my  visitors had helped me put the beater and the reed back on the loom I had every intention of spending the morning, sleying the reed!!!!  Then I would be able to tie on and start weaving the Christmas towels, - all red, white and green!

In order to do that I was going to have to ignore the 11 0'clock ukulele practice at the Senior's Centre, - but alas, there was a telephone call reminding me of the importance of the practice because the 'choir' would be present to sing along and make our singing of 'Enjoy Yourself" and 'Buffalo Girls'   (etc) more hearty than it usually is.

So I looked unhappily at the reed which wasn't about to get sleyed, and went off with my uke, my music, and a grocery list to fill before I came home again...

I found a great parking spot where I was not going to have to back out, and as I descended the SUV my two youngest sons pulled in beside me, all smiles....

One of them on his way to Penticton, and the other prepared to come and do some garden work for me after shopping.  Well, that was lovely, but we had to have lunch first (lasagna (sp) which I picked up at the Deli) and a little visit over cookies and milk.

We talked a bit about him driving the car to Penticton so I could visit the Doctor and the Audiologist
(I don't drive to out of town any more - not that I am not able and capable, but too many children worrying and putting their collective feet down!!!!) I phoned, and made the appointments for next week, and eventually he went off to attend to leaves that had fallen and I gave a little thought to making some more cookies for the children at Remembrance Day.

My ego said that the ones I had already made had spent too much time in the oven and became quite crisp.  I know the kids who were to partake of cookies and cocoa would not object, but said ego wouldn't allow me to send second rate cookies with my name on the cookie tin!!!!  Heavens to Betsy!!!  At my age!!!!!

By the time the cookies were out of the oven (this time quite acceptable, - soft and smelling delicious -  there was little time left to sley the reed, but I did go into the loom room and managed to snag at least three inches (54 ends) through the reed.  At this point my back began to winge, reminding me that we hadn't had our usual little after lunch nap, so to appease the back I went and poured a little brandy and had a before supper drink while I watched the news!!

So much for sleying the reed!!!

That is on my list for tomorrow morning, when I promise myself I won't be distracted.

Right now Callie, the cat, is stretched out beside me and the PC and I think we will spend the rest of the evening watching Netflix, making sure that we stay up long enough that Bruce's bladder isn't put to the test before morning comes again!!! 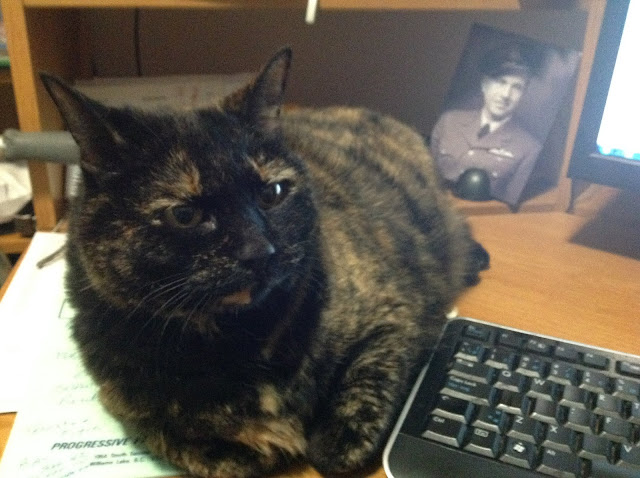 Surely nothing else can come aft aglae!!!!