When I woke at six this morning, grabbed a robe and quickly opened the back door to the garden for Bruce to find a convenient spot to make himself comfortable (euphemism),  I discovered that the rain had been coming down in torrents and had created a great huge puddle in the back lane, - probably wide and deep enough to launch a small boat with a paper flag.....

I immediately thought of the Saturday Farmers' Market and my daughter-in-law with all her marvelous loaves of bread, and cheese sticks and cinnamon buns that she would would be transporting to a rainy venue.

However, within a half an hour, while I had my first cup of coffee, I saw a patch of blue sky high in the sky, westward, and soon there were sunny skies reflected in the waters of the mini-lake... 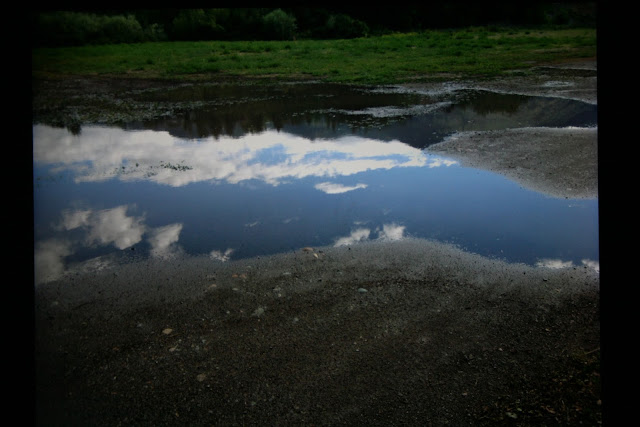 The rain returned about noon, - by this time I was quite nonchalant about it, and happy to have a cool day and so much welcome moisture in the garden and the hills and forests.  Last year was so dreadful for heat and wild fires.

For the rest of the morning I buried myself in Julian Barnes' "Levels of Life". A small book, in size, - but both entertaining and heart catching in content.

Julian Barnes speaks of the levels of life, - the drifting and soaring of his account of ballooning in the first third of the book;  the photographs taken by those early ballooners that gave us the opportunity to look at ourselves with increasing awareness of the earth, and the realization that Icarus was not a warning that this particular level of the heavens was off limits....  and then in the mid section, a faux biographic story of a love relationship between Sarah Bernhardt and Captain Fred Burnaby, on the level.

It is the last desolate essay on grief and mourning that I found so meaningful.  Written in memory of his wife, it is not the first book I have read on grief, - this area of human life that is so often camouflaged with silence and evasion, and probably not fully understood until we find personally that 'what is taken away is greater than the sum of what was there'.

I have just finished reading Julian Barnes' book "The Sense of an Ending" and it still sits open and marked on my desk to pages I want/need to re-read.  A short book, - really a long essay on memory and aging.  How in our younger years if we are not too busy with the exuberance of living we might now and then give thought to the other end of life, - the 'likely pains and bleakness' that age might bring, and imagine yourself being lonely, your friends all dying, the loss of status and desire.  Well, I don't exactly remembering spending much time thinking that far into the future or being so melancholy about it......

He also speaks of memory - and history.  How to him the ancient history is more stable and believable, whereas history as it is happening now is most deliquescent (had to look that up) and hard to pin down.

And memory, I find that unless I am well ordered and AWARE of everything I do I am inclined to have a very short memory - but my long memory is fabulous!!  All sorts of things keep coming back to me from my childhood - how else would I have remembered when I was talking to my daughter on the phone (I have forgotten what we were talking about that stirred the memory)  the little ditty that  we used to replace the beginning of the Anglican Morning Prayer.

Dearly beloved brethren, the scripture moveth us in sundry places
to go and watch the donkey races
and when the races have been run
we'll go and see which donkey won..

There is also a story contained within the book but it was Barnes' comment on this last part of life that I kept nodding my head in agreement over - "discovering, for example, that as the witnesses to your life diminish, there is less corroboration and therefore less certainty as to what you are or have been."  That gives one pause for thought.........

A quote from the book...  "We live with such easy assumptions, don't we?  For instance, that memory equals events plus time.  But it's all much odder than this.  Who was it said that memory is what we thought we'd forgotten?  And it ought to be obvious to us that time doesn't act as a fixative, rather as a solvent.  But it's not convenient - it's not useful - to believe this;  it doesn't help us get on with our lives; so we ignore it"......

The letter is Z
Z is for ZORBA  the Greek

For more enticing Zs zip along here to ABC Wednesday,
with thanks to Denise and Roger
and their zingy helpers
Posted by Hildred at 8:49 PM 10 comments: