Awash in books!  Brand new books, old favourites, a number recommended in blogland, and they all arrived at once over the library desk.... 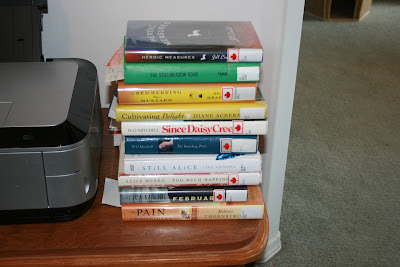 Plus three Adobe Digital Books that I thought would be ages coming!

I have put off getting some of the library books until the last minute, to give myself a little more reading time, and if I were really clever I would quickly devour the ones that I know someone else is eagerly awaiting because for sure there will be no renewing them.

But I'm not clever, - I'm sentimental, and I am living at Stillmeadow with Gladys Taber these days, as I have many other times over the years, - I keep going back to the mid twentieth century when her work originally captivated me, first in the Ladies' Home Journal and Family Circle as monthly columns, and then I became passionate about her books describing the life she, her friend Jill, and their children lived in a heritage house built in 1690 just off Jeremy Swamp Road near Southbury in Connecticut. 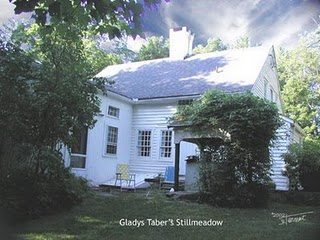 Gladys Taber died in 1980 and  her books, of course,  have a remarkable fragrance of those simpler times which I find appealing.  The recipes she includes are the lovely comfort kind, - food that that was quite at home in my kitchen and could often be found baking in the oven or simmering on top of the stove.

She was my inspiration for gardening and for cultivating the awareness of beauty in country life;  in the comings and goings of birds and wildlife and in the appreciation for the simple rural way of life.

And yet, she also was very aware of the dangers that threatened that rural life, and her daughter Constance has said....

" Gladys was one of the first to write about the dangers of uncontrolled development in Connecticut.  If she were alive today she would undoubtedly be finishing a book on land conservation.


Her books clearly depict Stillmeadow and its world as symbolic of something larger than one family, one town:  a way of life very precious and inevitably endangered.


Somewhat prophetically, in Stillmeadow Sampler, a book of essays first published in 1950, Gladys Taber wrote about a zoning meeting she attended in Southbury:  "It was a grim picture.  Business was bound to come; light industries were already shopping for land.  The quiet country farms were already going and developments would take over...  Eventually, of course, we will have to have some sort of plan to guide future developments.  Somehow we must protect the wooded hills, the greening meadows, the clean, sweet-running brooks, and the historic white houses - they are a precious heritage"


I only have a few more pages of this lovely book to read, and then I will set it aside until next time my hand and eye and heart are drawn to it.

Tomorrow I will start to read Alan Bradley's new book,  " A Red Herring without Mustard" which begins with the quote....."a cup of ale without a wench, why, alas, 'tis like an egg without salt or a red herring without mustard"   from A Looking Glass for London and Englande (1592) by Thomas Lodge and Robert Greene. and features the further adventures of Flavia de Luce, "the insidiously clever and unflappable eleven year old  sleuth" who is the heroine of this series (The Sweetness at the Bottom of the Pie and The Weed that Strings the Hangman's Bag). 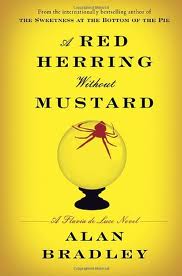 The wind still blows with a chilling vengeance but I am looking forward to March coming in like a Lamb!

The Letter of note this week is F, and F is for Flash Mob

Twenty-two million people have already watched this Fantastic Flash dancing to Julie Andrews and the Sound of Music in the Antwerp Central Station.

Nevertheless it is the best one I have Found on my search tonight, so if you have already seen it, I hope you will enjoy it again!  I'm sure you will, - watch for the happy looks on the spectator's faces, and the spontaneous dance steps they do as they join in!

For more great F's visit here at ABC Wednesday with many thanks to Mrs. Nesbitt and her crew.
Posted by Hildred at 7:56 PM 22 comments: