Little Gnomes, tiny Elves, the odd Troll here and there, - all Gone Wrong and banished from their former abodes. Some of the Shoemakers' Elves, good of heart and kind of spirit...

A few of the House Elves 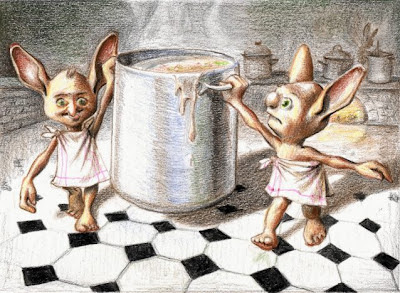 A bevy of woodland tailor elves 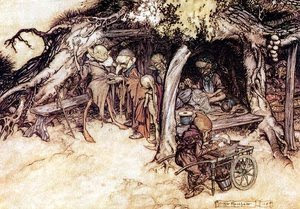 Some Gnomes from the Salt Mines

All heard the rumours, - big bucks at Bill Gates enterprises. All abandoned their good deeds, - their noses grew long and their ears grew pointed, and their eyes shone with with a lavicious light as they contemplated the forty or fifty pieces of silver (THIN DIMES)that they would be paid for taking on the job of MALICIOUS LITTLE MEN IN COMPUTERS WHOSE AIM IN LIFE IS TO CONFUSE AND BEWILDER LITTLE OLD LADIES AND THEIR ILK AS THEY BRAVE THE ONLINE WORLD .

They applied for their Work Permits and prepared for a life of devilment.

Of course the reason they are paid in thin dimes is because there is little room for them to manoever in the average crowded tower, or the new skinny monitors. However, they felt the Vista would make up for the crowded living conditions.....

I have this all on good authority. I have suspected my computer to be infected with little mischievous men for some time, and today it was proven to me!

In attempting to install a new Nero program I had first to uninstall the old one. No sweat, I thought. I began to uninstall in the late afternoon. I tried once, I tried twice, and then I tried again and yet again, growing increasingly more frustrated . I wrote to Nero Tech (no answer as of this time) - contacted Grandson Guru, - but still no joy. The dis-installation would stall in the same place every time. I went away in disgust, leaving the program unresponsive to my efforts.

When I came back the task was finished!!!

I considered it good luck and went about preparing the new disc for installation.

Read the instructions, started the installation, and two thirds through validation of the installation the program stalled, - the little green line rolled and flashed, but would not move even a smidgin.

Again and again I tried. Took time out to play cards, (cranky by that time) and then tried once more before going to bed.

First thing in the morning found me full of hope that the computer would have had a good rest and would be eager to cooperate.

I tried before breakfast to install that lousy program, - I tried after breakfast. I tried again after Husband went singing, and once more before the dog and I went out for our Constitutional. In utter despair I removed the disc from the tower, put it in the Jewel Case and tucked that and the instructions back in the box they came in, - reached up and put them up on the top shelf to stew in their own juices.....

Then I used Task Manager to close the installation, and off we went, dog and I.

I went to collect e-mail when we got back, and lo! On my computer screen was a printed message, asking me, sweetly, to check the components I wanted. Which I did, - the screen closed, - the Icon popped up on my desktop, and the program was installed. Perfectly.

Now you tell me, - if it wasn't those naughty little employees of Bill Gates, who was it who installed that program???

I had suspected a weak and wimpy Windows Explorer, but now I think that during the time I was stewing and fussing and fretting those dreadful little creatures were stealing the information from the installation, hoarding it away (as they once hoarded the gold at the end of the rainbow) and when they saw their chance they quickly threw it into the works and then sat down and roared with laughter at my astonishment when the program was finally mine, all mine. (my sister doubts this part of the story, - but if you believe the little Elves and Gnomes and the occasional Troll theory you should believe anything.....)

If you have another explanation I would be glad to hear it.... "How soft and fresh he breathes!
Look! He is dreaming! Visions sure of joy
Are gladdening his rest; and, ah! who knows
But waiting angels do converse in sleep
With babes like this!"
Bishop Coxe (1818-1896)


And to Katie and Will.....our dearest love

""In the sheltered simplicity of the first days after a baby is born, one sees again the magical closed circle, the miraculous sense of two people existing only for each other.""
Anne Morrow Lindbergh

Another chershed family - another hope for the future.

Posted by Hildred at 9:07 AM No comments: