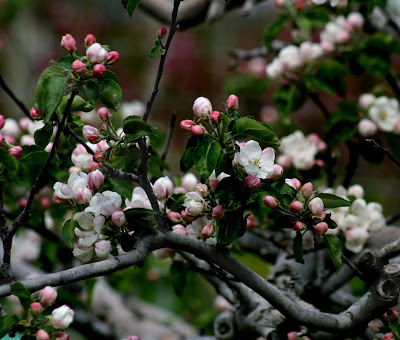 We celebrate a quiet anniversary.....happily!

Soft syllables, gentle names for the two best months in the garden year:  cool, misty mornings gently burned away with a warming spring sun, followed by breezy afternoons and chilly nights.
The discussion of philosophy is over; it's time for work to begin.

Yes, and so this morning I have put some sweet pea seed to soak
(I know it's late but the the first batch didn't take)
and I will go out and make a nice earthy trough for the sunflower seed, just outside the
fence.  In my mind's eye I can seen them leaning their lovely heads across the top,
in discourse with we who will enjoy
the privacy that their large leaves bring to the back garden.

I am not impressed with the seed to be planted, - scrawny little things, but hopefully they will grow.  I regret not saving some inventory from the Sunflower Bar and Grill we had in the garden on the hill, but the birds came in such flocks they left contented, with their tummies full and the seed heads bare.

We used to have Seedy Sundays here, where you could go and buy all sorts of exotic and healthy seeds that thrifty people had saved from their garden plants, but that seems to have gone the way of Fall Fairs and other bucolic happening.

I'm not sure where the big seed companies get their inventory, but in these two packages of sunflower seeds it looks as if they swept them off the floor, alas....

Well, now I have complained enough, - it is time to get the poor wee things in the ground and see if they respond and we will have sunflowers such as these below against the bright blue of the sky. 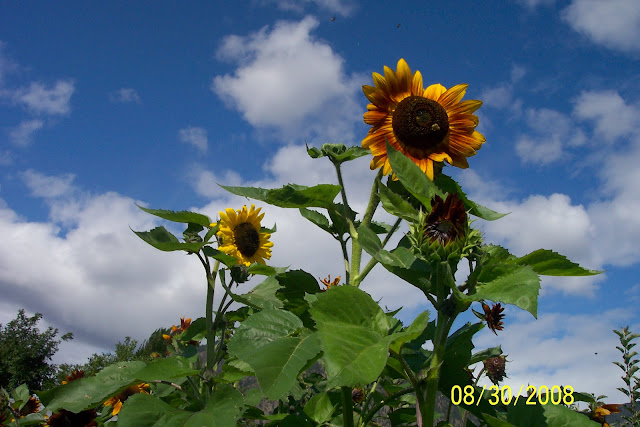 It is very chilly here at nights, and in the late afternoon if the wind
comes up it almost feels like March.  There is still snow on the high hills
and everybody is storing their bedding plants until it all disappears, - the snow, that is.
Posted by Hildred at 11:34 AM 2 comments:

The letter this week is Q and I love all the words it stands for, except maybe querulous.......

But quicken and quirky and quack and quiz and quince and quotient are all quite pleasant words.

Here is a picture of the Quince that is blossoming in my garden right now, - as we speak! 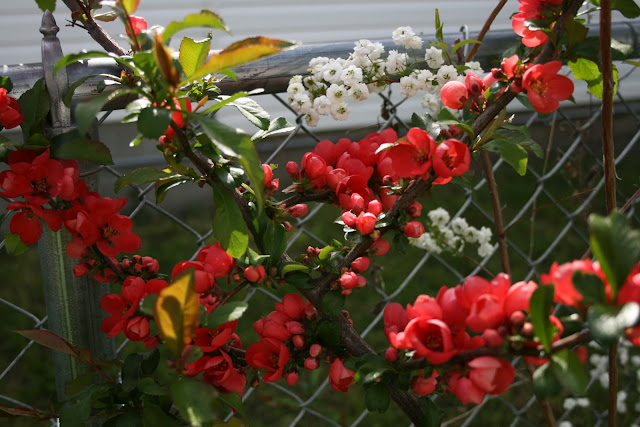 And here is a poem written by Salvatore Quasimodo who was born in 1901 of Sicilian parents.  He was an engineer with the Italian Government, but in 1930 he gave up this post and in 1938 he became the editor of the weekly magazine, Tempo and three years later was appointed to the chair of Italian Literature in Milan.

He was the recipient of many literary prizes.  In 1953, together with Dylan Thomas, he was awarded the Etna-Taormina International Prize in Poetry, and in 1959 he won the Nobel Prize for Literature.

There is still the wind that I remember
firing the manes of horses, racing,
slanting, across the plains,
the wind that stains and scours the sandstone,

and the heart of gloom columns, telamons,
overthrown in the grass.  Spirit of the ancients, grey

with rancour, return on the wind,
breathe in that feather-light moss
that covers those giants, hurled down by heaven.
How alone in the space that's still yours!
And greater, your pain, if you hear, once more,
the sound that moves, far off, towards the sea,
where Hesperus streaks the sky with morning
the jews-harp vibrates
in the waggoner's mouth
as he climbs the hill of moonlight, slow,
in the murmur of Saracen olive trees.

For more stories about the letter Q do quicken yourself over here to ABC Wednesday and see what Mrs. Nesbitt and her quirky helpers have for you to enjoy.
Posted by Hildred at 8:46 AM 16 comments:

A day of great efficiency for me.  I did the laundry, cut the lawns, shined the floors and dusted, paid the monthly bills online and snipped some rhubarb  - baked a rhubarb crisp for supper and put together a colourful gingery stir fry......

I don't get that much accomplished every day, but I wakened quite energized and one must not let these moments go to waste!!!!

Tomorrow we plan to go to Penticton, where I am going to visit that most dangerous of shops, - the plant nursery at Knapp's Plantland!  I figured if I got the house into ship-shape condition I could spend the rest of the week in the garden, and surely that Rhubarb Crisp will last us most of the week!

May continues to be a perfect sweetheart of a month, and the weatherman's chart shows great sun icons for Thursday, Friday and Saturday.

I will be on the lookout for hillsides golden with Balsam tomorrow, the bridal veil of the Saskatoons and leaves that cling to springtime green, making an aura around the newly awakened trees and shrubs.  I think we will take a thermos and some lunch and have a picnic!!!! 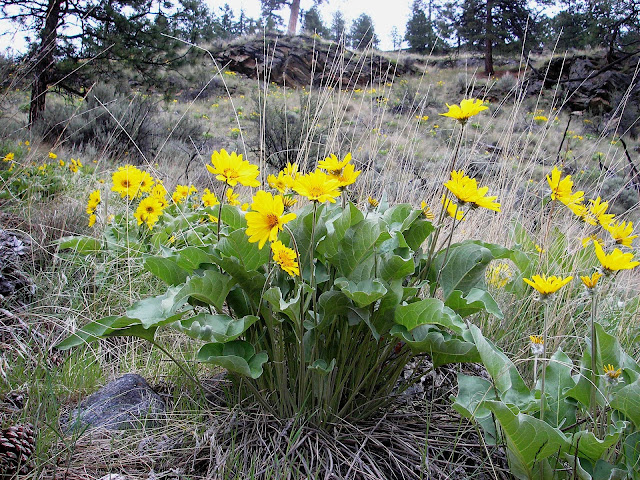 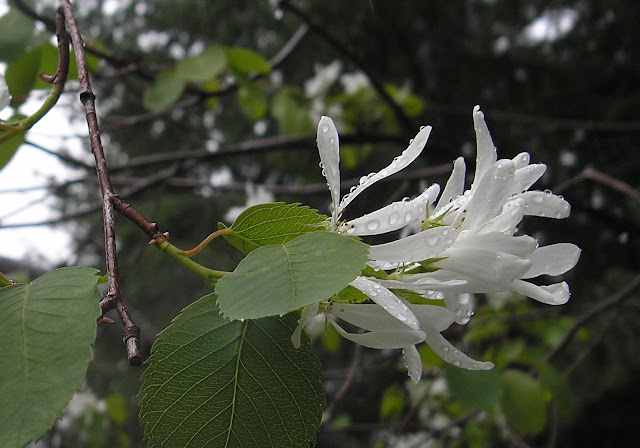 These last two pictures were taken on Eagle Bluff by Al Tinka,  on May 3rd, 2012, and I am hoping he won't mind me sharing their beauty here.
Posted by Hildred at 9:39 PM 4 comments:

Sunday, the 6th of May 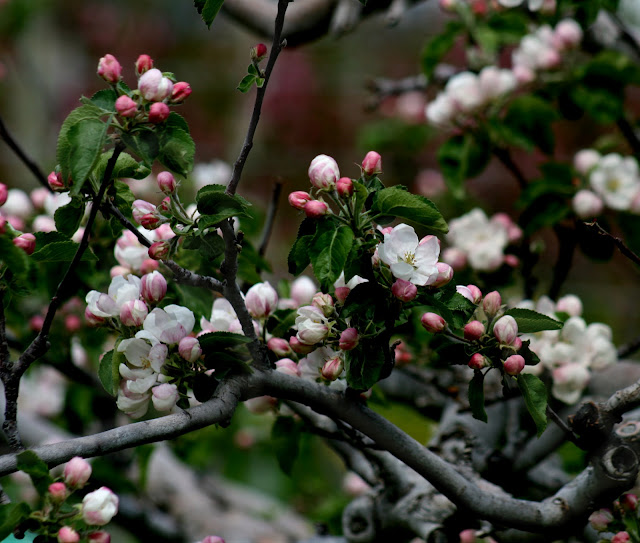 Is it so small a thing
To have enjoy'd the sun,
To have lived light in the spring,
To have loved,
To have thought,
To have done...