Our children are most kind to me in the most surprising and practical ways.

Since their beloved father died I have never been allowed to feel lonely or neglected (well, sometimes at nights the longing leaves me rather bereft.....)  However, they do all the loving and comforting things that we would hope most children do for their widowed parent.  Tall sons change light bulbs, fix water problems, visit and converse, sometimes on the most amazing topics which the younger generation seems to understand better than I.  They take me for rides along country roads where the meadowlarks sing and the wild grasses grow, and sometimes up into the mountains where the eagle flies!  My phone is no stranger to their daily calls - our youngest son now understands the workings of the eight shaft loom as well as I do, after he came out of the North to put it together for me.

And they keep me supplied with goodies, - so it was not surprising when our youngest daughter told me she was making Potatoes Anna to take to a friend's dinner, and asked if I would like to have a small portion!!!

Oh, Potatoes Anna - how I love them, and what memories they contain in their buttery goodness. 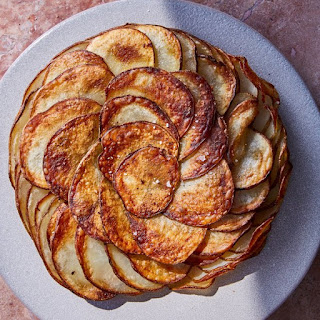 I was introduced to Potato Anna early in my culinary career when we moved
to Cawston and joined with other veterans in establishing orchards
on the Cawston Bench.

Alex was one of these veterans.
A little bit older than the average age of these men
and quite a bit more sophisticated.

Not a sharp end soldier, but someone involved in other military aspects.

He first became Charles' friend, and then a welcome friend to all our family.

An intelligent man, and extremely well educated.
he broadened our lives in many ways.

A Master bridge player, he improved our skills
at the game and we spent many happy hours around the bridge table.

Very knowledgeable about Music it was he who encouraged
me to hone my musical skills (such as they were)
on one showy piece that would be a standby
should I find myself having to play unexpectedly...
and so I practised the "Pathetic" until
I could play it passably well and with some confidence!!!!

Well versed in the elegance of cooking,
he introduced us to a marvelous Baked Salmon recipe,
to Cherries Jubilee,
a fabulous apple pie recipe,
and, of course

Who would have known that the lowly potato could be so fashionable,
and delicious...

To make Potatoes Anna you need a nice deep pan
or a heavy iron frying pan.

Using a sharp knife slice about three or four potatoes thinly
(about 1/8th of an inch - not paper thin)
Don't dip in water, - you need the starch to bind the potato slices together.
Butter the pan, generously, and arrange the slices in concentric circles.
Season the first layer with a little salt,
drizzle with melted butter,
and then repeat until you have three layers..
Tuck a bit more butter in around the edges
and season again with salt.

Put a lid on the pan and bake for about twenty minutes in a 375 degree oven.
Remove the lid, and bake another 25 or so minutes,
until the tops are golden and crispy.

Remove from the oven and run a knife around the edge of the pan.
Place a serving plate over the top
and flip the whole delicious concoction on to the plate.

If you wish the crispy potatoes to be on the top
repeat with another plate
and then cut into wedges to serve.

Absolutely marvelous with that Salmon recipe I spoke about earlier....

Just the thought of this lovely dish brings back wonderful memories of Alex, of our time on the
Cawston Bench, of the friends we entertained with the great recipes he shared, how easy it was to get those beautiful salmon from our First Nation friends, fresh from the Fraser River, and oh, - just all sorts of sweet and poignant feelings!!

Alex married a few years after we all planted our orchards and created a community, and his wife,
Elizabeth, became one of our dearest friends.

*Pomme Anna recipe dates from Napoleon's time..
named after one of the lovely ladies of the Court

Once I had a friend - a War Bride from Lancashire who married a Cawston Lad and came here, to British Columbia, as did many other War Brides who were dazzled by Canadian Fellows.

She lived in the village and I lived on the "Bench" where Charles and I were establishing an orchard and bringing up all those lovely children.

We were both Anglicans.  She was here before me, and when I arrived she took me under her wing and introduced me to the village, the church and the adjoining town.  She also re-introduced me to the Jelly Roll, which a friend of my mother's used to make but which I had never tackled.

It was her Piece de Resistance..

She made the most marvelous Lemon Curd filling for those light and wonderful concoctions that she baked in a 10x15 inch pan, turned out on to a clean towel covered with icing sugar. slathered it with that lovely lemony sauce and then rolled it up tight and waited for exclamations of appreciation.

Which I must admit were many, - it became her trade mark, - that and her fondness for "Knees up Mother Brown" at Saturday night parties!!!

Tomorrow, or the next time I write here, I will tell you about Potatoes Anna and the sweet and exotic friend who taught me how to make this enticing dish...