Saturday, July 18th, 2020 Oh, it's been a hot, hot day!!! Out the back, early in the morning, it was cool and morning coffee was a pleasure. I took some shriveled up lettuce leaves out of the two big pots I had planted with daisies and various kinds of lettuce greenery, and I went to inspect the bodies of the red mites and white aphids that I had murdered yesterday. I found I wasn't too good at that profession, - a few mites and aphids lying dead, - a few more looking sickly, but the majority were snipping away at the roses and the stems of the yellow daisies. My youngest son and I had buried Callie at the bottom of the garden, and planted a lovely white rose above her (it has turned out to be a climber, so should make a dear little spot of remembrance. However, those sweet buds needed another insecticidal spraying, so I did that; picked a few raspberries to have for breakfast, and Bruce and I sat for a while to watch the birds and the bees and the butterflies while we breathed in the sweet, cool morning air. In these pandemic days there was a service of sorts for a friend from early days who had died a few months ago, and not being able to attend, but wanting to send a remembrance (and not having any sympathy cards in the house - drat it!) I spent the rest of the morning struggling with printable cards, the printer that didn't want to cooperate, and a search for the right size envelope wherein to put said card!!! By this time my six o'clock breakfast had kept me satisfied for long enough, and it was time to renew my energies with lunch......lunchtime already, and no weaving done!! However, I made up for that in the early afternoon. Washed the warp that the same number four son who helped me bury Callie had just taken off the Glimakra. and admired the free style weaving he had accompished. That loom is empty now, and I am excited about preparing the mohair warp for a lovely warm, fuzzy blankie!! And I did a few inches on the lacey tea towels I am making... I began to realize it was fairly warm in the house, and after checking the thermostat I went out to peer at the air conditioner which was buzzing away but not accomplishing much except making ice around its' hoses. I have a little note stuck to the wall, next to the therostat and it tells me what to do if that condition should arise (as it has before) so I did what I was instructed (I think the instructions on the reminder came from Charles so I was careful to follow directions) I do miss him so.... The afternoon didn't get any cooler, - the sun shone down upon us and the air was still, - not a leaf moving or even the slightest breeze blowing. I had a quick supper - peeked out the door to see if the temperature still hovered around the lower thirties Centigrade. It did, so here I am with a fan blowing at my back. I have had my nightly telephone call from D - dear daughter - and I am readyfor whatever the evening brings. Sometimes in the day time evening tasks come to haunt me and I resolve to start sorting and marking snapshots, - especially those of people who will not be familiar to the younger generation, and who I especially want to be remembered..... A little cello music will make a nice background, - Hauser, probably....his music is so very beautiful! I think there is not much chance that tomorrow will be cooler, but it is July and it's fine to embrace the summer days!!
Posted by Hildred at 8:19 PM 3 comments:

Tuesday evening, July 14th, 2020
A few months ago I cane across a book of poetry written by Jane Kenyon.
Her name was new to me, as was her poetry, but the few poems that were available to me interested and touched me, and I sent away for her Collected Poems.  I have been enjoying them immensely ever since, and was sorry to read that she had died in 1995.
I had marked Page 248 with a little slip of paper, to remind myself to go back and read her poem "Not Here", because it reminded me of a little calamity I had experienced, (and  I will tell you about after you have read Jane's account of her experience)......
"Searching for pillowcases trimmed
with lace that my mother-in-law
once made, I open the chest of drawers
upstairs to find tthat mice
have chewed the blue and white linen
dishtowels to make their nest,
and bedded themselves among embroidered dresser scarves
and fingertip towels.
Tufts of fibers, dropping like black
caraway seeds,and the stains of birth
and afterbirth give off the strong
unforgettable attar of mouse
that permeates the old farmhouse
on humid summer days.
A couple of hickory nuts
roll around as I lift out
the linens, while a hail of black
sunflower shells
falls on the pillow cases,
yellow with age, but intact.
I'll bleach them and hang them in the sun
to dry.  There's almost no one left
who knows how to crochet lace.
The bright-eyed squatters are not here.
They've scuttled out to the fields
for summer, as they scuttled in
for winter, along the wall from chair
to skirted chair,  making themselves
flast and scarce while the cat
dozed with her paws in the air,
and we read the mail
or evening papers, unaware"
Well, my calamity happened in the dead of night, but it was while Callie was still with us, probably deep in sleep on the couch.
I had been busy weaving, as usual, and had made a scarf that I was especially delighted with,,,  Along our hallway my oldest son put a railing at elbow level, to discourage falling, but I found that it was just the thing to hang folded scarves and tea towels and other weavings, straight off the loom.
This is where I had put the scarf in question, so I could admire it!
Here is a picture of the fringe that hung on each end!! 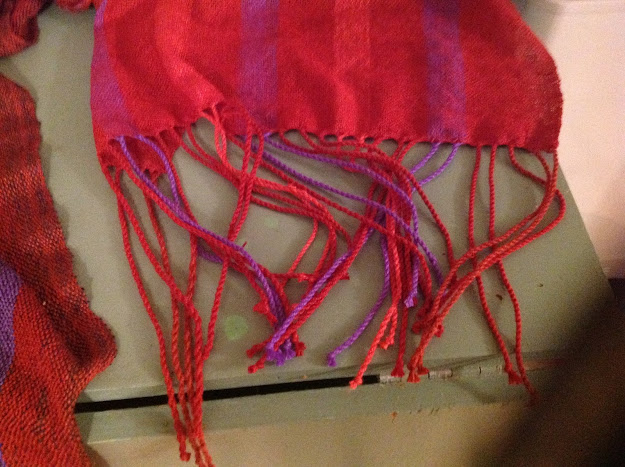 Some time during the night a little mouse (or a little rat) came along and chewed each fringe from one end of the scarf - right  to the hemstitching on the end!!
So now the scarf sits in my Hope Chest (although I don't have hopes that it will grow a new fringe) -
and some day soon I will snip off the fringe from the other end, and hem both ends neatly.
So there is my tale of woe which is quite as soul searing as the damage done to Jane Kenyon's mother-in-law's lace edged pillow case.
Posted by Hildred at 10:16 PM 4 comments: 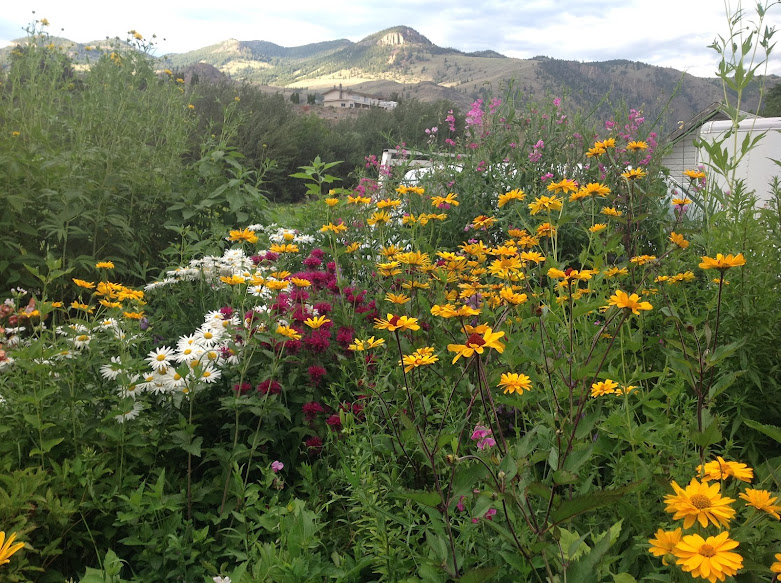 Oh look!!
Blogger and I are starting to get along quite nicely
and I was able to capture a garden picture
and put it just where I wanted it!
It's been a nice Sunday - I went to church online this morning
and afterwards spent a few hours on the loom -
I made a real mess of threading a lace pattern
and so am ignoring the lace threading and
making a pretty kitchen scarf in plain weave
before I get up enough courage to cut off the warp
and re-thread it to the proper pattern.
I suppose it doesn't really take courage ---
Just a weary acceptance of the fact that I have
created a little monster
and I must spend time re-threading.
But then, what else is there but time
with this on-going pandemic that only seems to
affect us with a little "lockdown" that discourages
us from gadding!
Lovely afternoon of music on the TV .....
Enjoyed a young man's violin music
and Pressler - the 96 year old pianist
who plays the piano like a young and vigorous man.
I admire him greatly, - he has such a sweet smile, too.
Oh, if life is kind to us oldsters
we do make the most of our gratitude!!!!!
I
Posted by Hildred at 8:52 PM 8 comments: