I am sorting through some old pictures when I come across a sidewalk photo, taken in Edmonton ca 1944.  Then another, and another, until I have half a dozen.  I am looking for a remembrance picture to add to my Recollections, and the memories roused by these photos call out to be recorded.

I wonder about the practice of sidewalk photography, - is it still a viable business for anyone looking to augment their income during these difficult economic times?

Oh, surely not, I think - times have changed since these pictures were taken and the Rights of people are so easily offended now!!!

But in those more innocent and sensible days the sidewalk photographer was easily accepted, - even welcomed.  When the camera snapped and the lens captured your image as you walked down the street there was a little excitement and a pleasant feeling of anticipation as the photographer handed you the chit to retrieve the picture - for a small sum.

Here are some of the photos taken with friends and colleagues as we window shopped during our noon hour, dreaming over things for our hope chests, spending precious moments looking for just the right greeting card, and occasionally on payday buying some article of clothing that had caught our eye.  Paydays at that time were a pittance compared to today's generous wages.  I made little more in a month than what is now paid for a day's wages, but prices were equally as small so it all evened out. 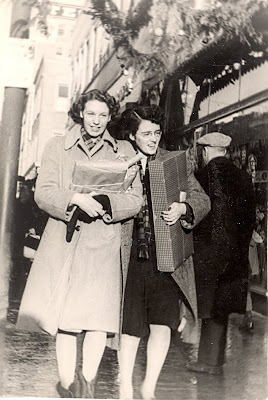 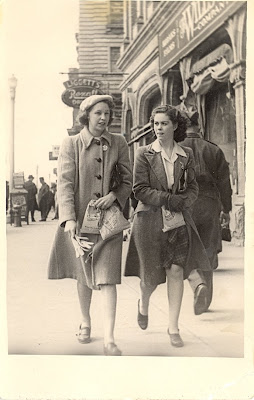 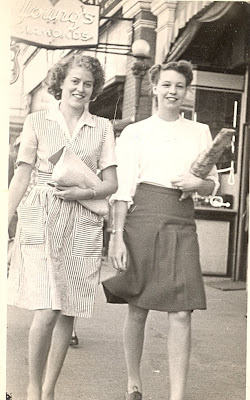 These were all dear friends.  I am nostalgic and smiling at the memories the pictures bring to mind.  And I say Up, up with Street Photographers, and mourn their passing.

They were special.   'They had almost no time to make a decision and they had to be prepared to snap the picture as soon as the subject came into focus and the brain signaled "NOW". A fine instinct for the perfect moment was never enough. The eye and the hand and the brain had to coordinate perfectly and without hesitation'.

Skilled street photographers developed the ability to compose and frame the image in their mind’s eye before they even raised the camera.

When we were on our honeymoon Charles and I were snapped on the street, coming from our hotel.     I see I have a letter in my hand to mail, - probably to my mother.  We had had so little time together, and were so very new with each other, -  and they were such entrancing days. 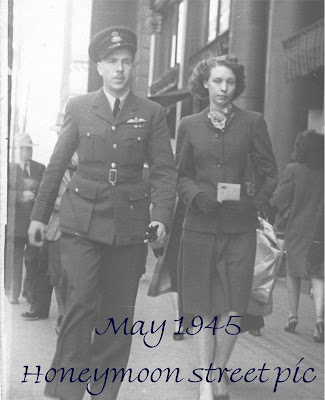 As sometimes days are now, sixty-six years later.....
Posted by Hildred at 6:52 PM No comments: 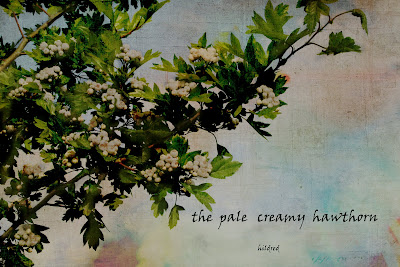 Using Kim's Stained Linen on the creamy hawthorn at the edge of the garden.
Love Textures?  Visit here at Texture Tuesday for more treats.
Posted by Hildred at 9:33 PM 3 comments:

The letter this week is the noble T


T is for Toadstools 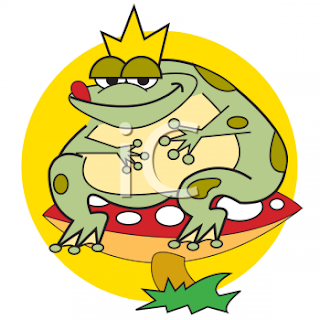 Here is a Toad, sitting on a Toadstool 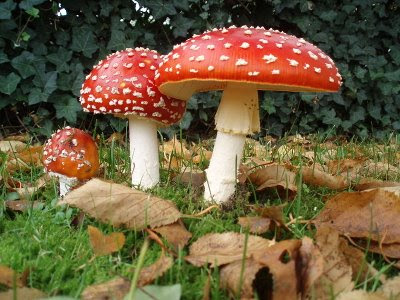 The Toadstool is an amanita muscaria variety
This is the type of Toadstool the Brownies used to dance around, and the one
chosen by many human Brownie Packs as an emblem
and a seat for the Brown Owl
I don't remember the Toadstool in my Brownie Pack being polka dotted, - I'm sure
it was of the plain brown variety, but that was long ago, and some of my memories
may be a little vague.
A long, long time ago in the far distant past, when I was too young to join Brownies I was allowed to go as an Elf and sit under the Toadstool and feel tremendously important to be there with the BIG kids.
After I got old enough to graduate from being a Toadstool sitter I got to be a full fledged Brownie.
Brownies was a serious organization, - it involved getting badges and learning to tie knots.
I don't think Brownies learn those things any more, but they do learn to be good citizens, and luckily for them they wear some pretty nice casual clothes, that gives them the distinction of being a Brownie but not the itchiness of those long stockings!
Here I am, with them bunched around my knees, circa 1933...... 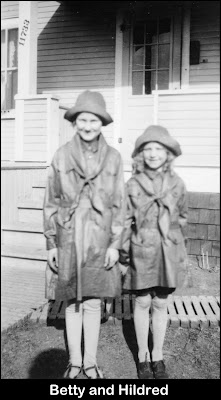 That's me on the right!!
For more great interpretations of the letter T skip on over to ABC Wednesday, here, with many thanks to Mrs. Nesbitt and her kind helpers.
Posted by Hildred at 8:54 AM 16 comments: