The sun shone quite nicely this morning.  The windows have been cleaned, inside and out, so nothing  there to cast a guilty shadow.  But, ah, the dust!!! 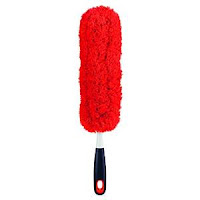 I set aside my coffee, - mopped the floors and started dusting with my nice new scarlet microfibre duster....

By the time I had reached the book shelves I had lost quite a bit of my original impetus, and I lingered a while, pulling out a book here and there.

Ah, there is Jan Karon, and her 'Continual Feast'

The invitation was palpable!!!

Warm up the coffee and have a little brouse through Father Tim's words of comfort and celebration.......

The face page declares this to be an edition of the words of others,
gathered together to inspire and comfort
and probably to advance the sale of Ms Karon's books
about the beloved Father Tim.

"I have gathered a posy of other men's flowers,
and nothing but the thread that binds them is mine own".
John Bartlett

I leaf through the pages and come upon this....

"Great works are performed not by strength
but by perseverance".  Samuel Johnson

Well, I am sure Samuel Johnson was not interested in my dusting
when he referred to 'great works'........

I flip over and find by an unknown author, but in Father Tim's own hand writing

"Eternal God, I thank you that I am growing old.  It is
a privilege that many have been denied.
Spare me the self pity that shrivels the soul...
and grant me daily some moments living on tiptoe,
lured by the eternal city...." 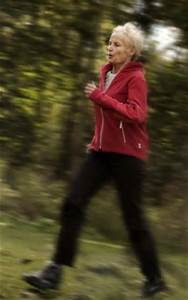 This sounds more appealing.....I am grateful and I do look for Tiptoe Moments

but I turn the page, and find here some words on Bereavement....

and they touch my heart.

"It is not that we feel cut off from the bigger spiritual relationship which
survives death, but from the hundred and one lesser links which
bind people together, incidental things which when looked back on seem
of enduring significance but which were taken so much for granted
at the time.  The other person's sense of humor, prejudices, moods,
all that has gone.  For the rest of our lives we shall have to do without
his mannerisms, his shyness, his ways of pronouncing things.

The voice is silent - we had expected it would be - but that the
yawns and bursts of laughter will never be repeated is almost more than we can bear...
These moments were not passing moments at all.
They had something in them of eternity."

I am lost in memories, the duster forgotten for the moment
but the next page I open releases me from guilty idlesness....

"Work is not always required... there's such a thing as sacred idleness,
the cultivation of which is now fearfully neglected."

There, not only released, but released into worthiness...

and then I read from Macbeth

"Cans't thou not minister to a mind diseas'd, pluck from the
memory a rooted sorrow, raze out the written trouble
of the brain, and with some sweet oblivious antidote cleanse
the bosom of that perilous
stuff which weights upon the heart".

and I sigh a bit, pick up the duster and look out upon the sunshine
and smile at the quail which have gathered to feed.

After the work is done I practise on my new ukulele!!!!
That is another story......
I know all the chords to Silent Night so
am getting ready for Christmas!

Watch for a progress report!

The letter is S for Summerland

Said to have been the inspiration for the name of the town, certain to
entice settlers to come west to a heavenly Summerland
(and there were a lot of Baptists in early Summerland!) 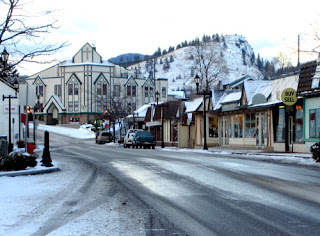 and still are....  here is the Baptist church - a fine
church with a great men's choir in which our oldest son sings ! 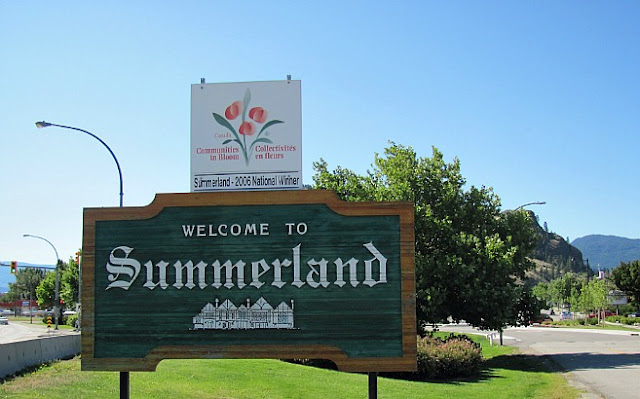 Originally the area was called Nicola Prairie after Grand Chief Nicola of the Okanagan Nation - successful hunter/gathers who had been in the area for many hundreds of years.

A few major First Nations trails passed through Nicola Prairie in the early days, and
they were used by fur traders and later miners on their way to the gold rush.
The excellent grasslands along the route attracted ranchers and orchardists.

The first Summerland town site was incorporated in 1906, on Okanagan Lake
where the sternwheeler boats delivered goods and people imported fruit to market.
When the population ran out of growing room houses and businesses began
appearing on the flat lands above and a land deal was negotiated with the First Nation's
people from Siwash Flat, making room for a new townsite which became the
Summerland of today, - a pretty and cheerful town with leafy boulevards and
a wonderful combination of history, arts, culture, wineries, and the fruit industry.

An  extinct volcanic mountain dominates the skyline - Giant's Head, so named
because of it's resemblance to a face on one side of the mountain. 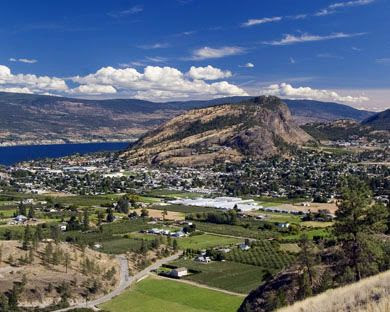 The clay cliffs that line the road leading to Summerland from Penticton
make a magnificent entrance.

The town itself is surrounded by sumptuous orchards and wineries 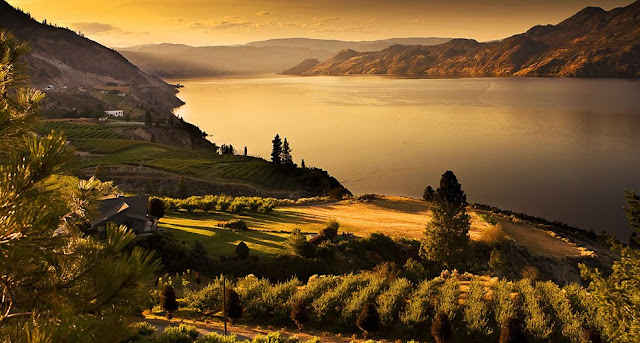 There is a self-guided walking tour of the original town site on the shores of Okanagan Lake,
and more up Giant's Head and in the surrounding hills.

Summerland is the site of a provincial Agricultural Research Station,
with beautiful lawn and gardens - a lovely place to picnic and explore. 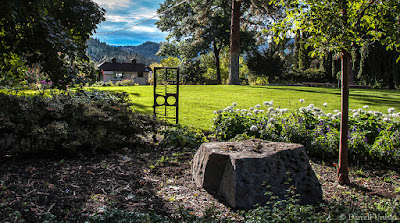 There is a Marina and sail boats to accompany it.... 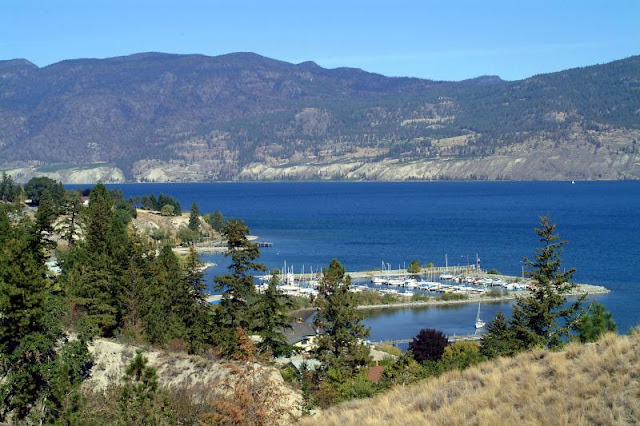 Zia's restaurant in an old stone house of pioneer vintage, where we love to lunch or dine.... 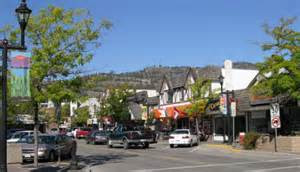 and the piece de resistance - a steam railway!!! 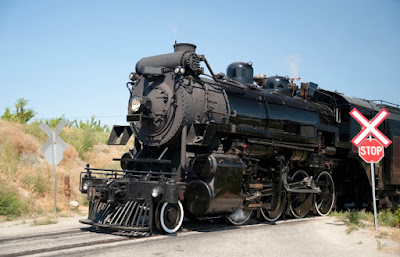 The Spirit of Summerland

A restored 1912 steam locomotive pulls the combination of vintage rail cars and open observation cars through the farmland of Prairie Valley, around the base of Giant's Head Mountain, ending on Trout Creek Bridge, the tallest on the KVR at 240 feet,
providing excellent views of Trout Creek Canyon. 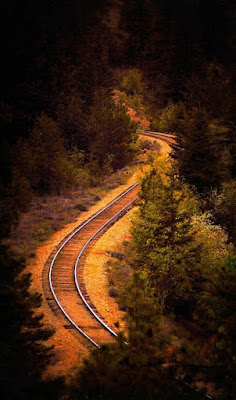 There are special events from May until September featuring a Great Train Robbery
and at Christmas the Train Morphs into a Santa Express.

Videos below that celebrate these events.....

Summerland is within travelling distance for tea, here in Keremeos!! 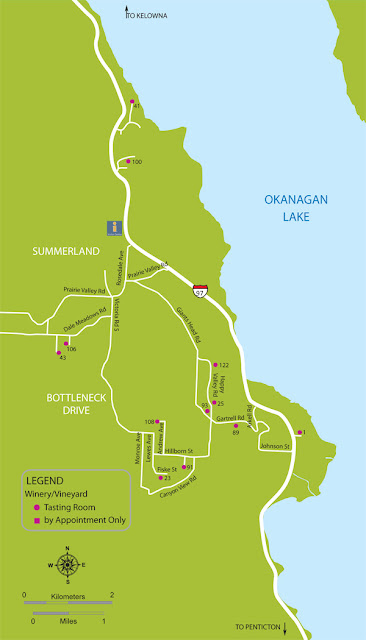 Click here for more great Ss with thanks to Roger and Denise
and all helpers, saintly or sinful.

Photos all from Sir Google
Posted by Hildred at 10:29 PM 18 comments: 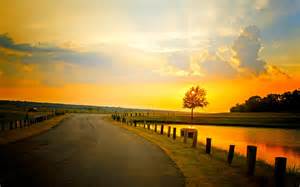 ....amd Life is Eternal and Love is Immortal,

and Death is only an horizon,

and an horizon is nothing save the limit of our sight....
Rossiter Raymond
Rest in Peace,  my love
Posted by Hildred at 7:51 AM 2 comments: