The signs of Spring are still pretty sparse on the ground, - and not too plentiful in the trees either.

Be that as it may, if we were still on the farm the big barn would be full of new spring lambs and their mothers. Those who were old enough to be out in the barnyard would be bounding, gamboling and springing up and around the yard whilst ma had her dinner. 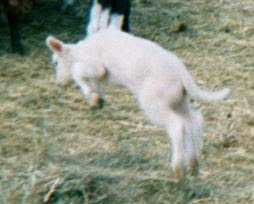 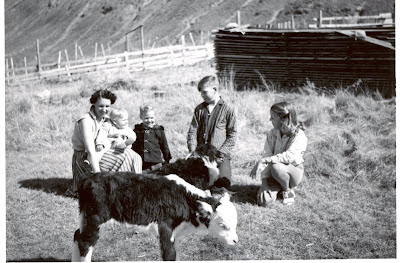 There might be a calf in the small barn, occasionally a filly or a colt, and when spring was far enough advanced the meadowlarks would call an invitation to come and join them outdoors.

When I, a city girl, became acquainted with farm animals, I mistook this invitation to also include Daisy the new milk cow. She had been in the barn all winter. The spring breezes wafted, the sun shone gently and a few wisps of cloud floated aloft. A perfect day for Daisy to make her debut on the sage brush hills. We had a lovely stroll together, until she got too friendly and stepped on my foot..... Remember, I was a city girl, young and foolish but full of concern, - and it wasn't too long until I was much more intimate with Daisy, via the milk pail and my vigorous administrations to her teets. 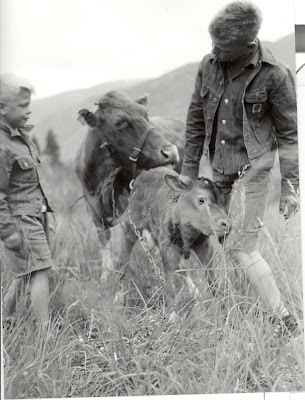 While Caspar and I ambled down the road tonight we saw the ranchers' lights down by the river, checking the fields for new born calves. And in the distance we heard the hungry howl of the coyote pack.

Here and now on the pasture the snow is patchy and the green of the grass is promising. A few more sunny days and winter's coverlet should be gone. The small birds who frolicked amongst the trees a couple of weeks ago will come back from where they retreated when the cold weather came again.

And I will be in seventh heaven with the shears and the wheelbarrow, making way for next year's growth in the perennial garden.

Callie the cat will be ecstatic too, - she is definitely a garden cat who prowls the little pathways and hides in cool and fragrant spots.

When I was researching my father's family I came upon Great Aunt Mary Anne who was born on April 17th, 1823, and married Thomas Johnson on September 5th, 1845. It is said of Mary Anne that the countryside knew that spring had truly arrived when she painted her door a flaming yellow, and started housecleaning. According to the information I received her husband, Thomas, was an outside man, and the comment was made that he cultivated the outdoors for his own peace of mind during housecleaning time. Delightful to come upon such tidbits that make ancestors truly living, breathing people with all the foibles that still beset us.

Yellow doors, yellow daffodils, a branch of golden forsythia and a buttercup or two, - all sing the season.
Posted by Hildred at 6:53 PM 2 comments:

Labels: bits from the past, spring signs, yellow

Too Soon Old, Too Late Smart by Gordon Livingston, M.D.

Before I take Gordon Livingston, M.D. and his book, "Too Soon Old, Too Late Smart" back to the library I want to once again re-read his chapter on memory, and the legitimacy of the memories we retrieve.

As a matter of fact, this is a book I would be happy to re-read many times, and to share with any number of people. I am leaning towards Indigo........

The insights which he writes about in this book are presented with sensitivity and kindness, but even more with an abundance of common sense.

The flyleaf states"full of things we may know but have not articulated to ourselves, Too Soon Old, Too Late Smart, is a gentle and generous alternative to the trial-and-error learning that makes wisdom such an expensive commodity. For everyone who feels a sense of urgency that the clock ticks, and we still aren't the person we'd like to be, it offers solace, guidance, and hope."

Every chapter in this book caught my attention, but as I seem to have reached a point in life where memories bring great comfort I was especially intrigued by the title of this chapter. "The Only Paradises are Those we have Lost"

Is this true? Do we consistently lie to ourselves about the past? Livingston starts the chapter by pointing out that our conviction that things were better when we were young is not really valid. I have suspected this for some time, - that actual events were not better, - but I have always thought that the way we coped with these events and conditions showed a little more moral stamina than that found today. Am I wrong? (sigh - I wouldn't be surprised....)

Livingston explains that "what happens as we try to come to terms with our pasts is that we see our lives as a process of continual disenchantment. We long for the security provided by the comforting illusions of our youth. We remember the breathless infatuation of first love; we regret the complications imposed by our mistakes, the compromises of our integrity, the roads not taken.......our yearning for the past is fueled by a selective memory of our younger selves."

Well, after some profound thinking I agree with that to a certain extent. Surely our memory is selective. But the mystery is, what causes me to remember sitting on the sidewalk with Jim and Barry Cooper discussing the merits of apples, oranges and bananas when I was about four years old, and yet not being able to remember how the furniture in my childhood bedroom was arranged. I will watch carefully to see if the modern day scientist discovers which portion of the brain lights up over these trivial memories.

And, in addition, I question the conclusion that postulates "when the past takes on the illusion of satisfaction, excitement and romance, it must necessarily make us disenchanted with the present". Different people view the past in different lights, depending upon where they lie on the "positive-negative" scale, and if you are lucky enough to be an optimist, than the present is indeed just an extension of the happy past.......

A little more thought may cause me to change my mind, but at the present this is what I'm thinking.

I do recommend this book to all who are still searching......
Posted by Hildred at 8:19 PM 1 comment: