It has turned out to be not so melancholy after all, - we have had some lovely sunny days.

Today our youngest son, good fellow that he is, cleaned out all the gutters
while I peered out the window, now and then,
hoping that the ladder, (which appeared rather rickety)
was still keeping him up at his task!!

We have had a few chilly nights,
and he said one section of the gutter was full of ice and frozen leaves,
and he was able to lift great sections out in one piece.
Which hurried the job along!!!

I stayed in the house, - ----
dusted and mopped and cleaned the windows,
a need that the sunshine was rather pointedly making obvious.

Feeling quite virtuous after all that polishing and shining
I retired to the loom room and threw the shuttle for a while,
extending the nice shetland wool scarf on the LeClerc at least another half a foot.
Or half way round the neck....

Having finished the Christmas towels I am being hesitant
about winding another warp right away
- a few days to contemplate what comes next are somewhat inviting!

Some of the Christmas kitchen towels were just as I had hoped they would be, ----

some of them look bright and merry hanging on the hall railing,
but a closer look reveals skipped stitches and uneven selveges,
and I wonder if I tuck them in with some delicious Christmas shortbread
the recipients will lay it all down to Great Grandma
getting along into her nineties
and accept the love as well as the imperfections! 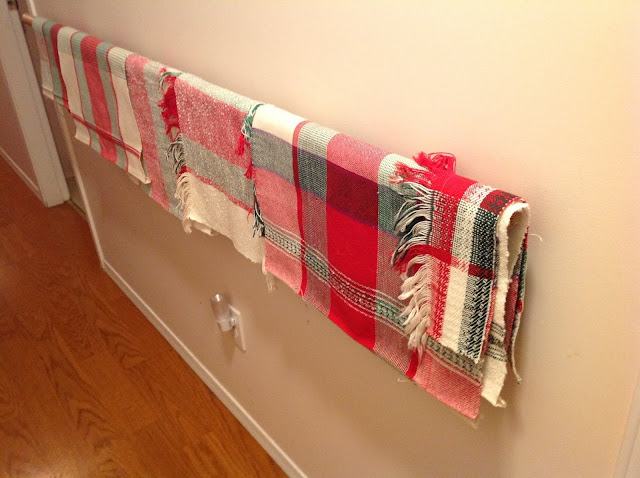 Lots of hemming to do here..

And here is Bruce!! 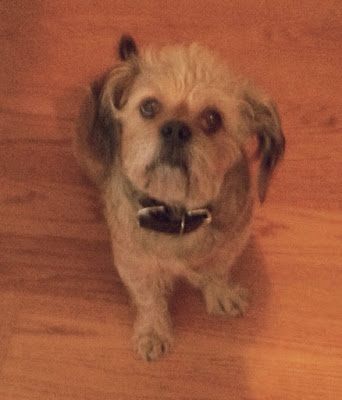 telling me that it is time

for him to go out and romp abit
(amongst other things)