Rebellion in the Mohawk Valley
The St. Leger Expedition of 1777 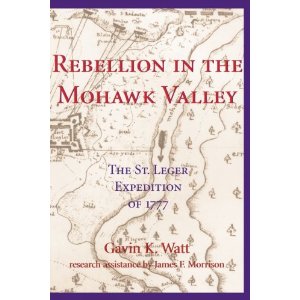 Written by Gavin K. Watt with research assistance by James E. Morrison, this is the book that sits on the table beside my bed, loaned to me by the writer who is interviewing Charles (along with many others) for the second edition of his book of Veterans' Stories.

As an aside, we soon discovered our mutual interest in United Empire Loyalists, he being much more enthusiastic and hard working about the association, having obtained all the necessary documentation to enable him to use the official title of "UEL", while I know enough about my various United Empire Loyalist ancestors to claim allegiance, but not officially.

It is really not a bedside book, but rather one for sitting at a desk and making notes, - at least for me. I am pleased to read the little notes that the owner of the book has added along the margins, but the book gives such excellent attention to detail that I need an outline to guide me as to movements and characters, battles and retreats, and all the little political intricacies of the endeavour.

'In the summer of 1777, while the British and Americans were engaged in the bitter American Revolution, a massive campaign was launched from Canada into New York State.  Brigadier Barry St. Leger led a crucial expedition from Lake Ontario in the Mohawk Valley.  The goal was to travel by waterways to join Lieutenant General John Burgoyne in the siege of Albany.  But Leger encountered obstacles along the way.  While laying siege to Fort Stanwix, Leger received word that Benedict Arnold was leading a massive relief column that was headed their way.  Leger and his men retreated, and despite as later attempt to carry on, were never able to help Burgoyne.  The Americans then destroyed the British-held Fort Ticonderoga, marking the end of the campaign.


The results of the failed St. Leger expedition were historic.  Not only was the loss of Fort Ticonderoga a major blow to the British war effort, but the campaign also brought about the disillusionment of the Iroquois Confederacy and saw the founding of the infamous Butler's Rangers and the first major campaign of Sir John Johnson's King's Royal Regiment.'


Of the Loyalists who eventually settled in the country around Cornwall, and in Stormont, Dundas and Glengarry, there were many who married and became my gg grandfathers, grandmothers and aunts and uncles and cousins.

While I was most passionate about genealogy and discovering the people who moved to Canada because of the Rebellion, it was as if I moved back in time two hundred years, and they became intimate and familiar to me as even the present day community where I now live.

I knew about cousin Adam Helmer's famous run that was depicted in 'Drums Along the Mohawk', and the fact that one of my gg aunts on the Cline side of the family painted her front door yellow each spring and was such an enthusiastic house cleaner that her family were known as the 'Clean Clines'.

I know that many of the men who settled in this part of Canada were members of the King`s Royal Regiment known as the King`s Royal Yorkers, and this link explains much about the formation of this regiment.

I have a shelf of wonderful books and notes, packed with information about my Loyalist ancestors, and an abiding gratitude to the people who researched and gathered the contents into print.

I am hoping that the ties that bind me to these Empire Loyalists will inspire me to finish the book with a more complete understanding of the events that eventually brought them to Canada.

Charles` family came to Canada much later, but his American Ancestry started with Finches who originated in Lancashire and sailed with the Winthrop Fleet in 1633......I think they were all Patriots!


Psalm 90:12  So teach us to number our days that we may apply our hearts onto wisdom. 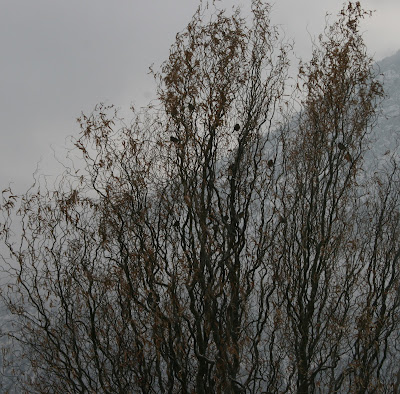 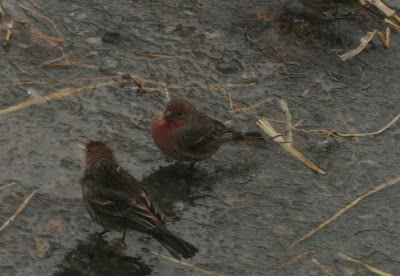 Il Silenzio, hauntingly
across the water.
Tears gather, and fall
Posted by Hildred at 12:08 PM 2 comments:

an explosion of small birds
and quail
dark wings sweep the snowy sky
hungry for breakfast
Posted by Hildred at 10:02 AM 3 comments:

I watch from the window
Grateful for the guardian angels
of tractors
and good timing..
Posted by Hildred at 1:08 PM 5 comments:


Y is for yearning - that wistful, melancholy and sometimes pensive longing we have probably all felt at one time or another. 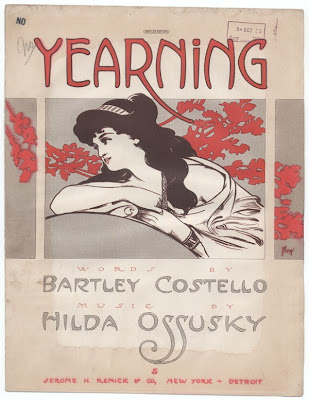 Here is a little musical ragtime that expresses that poignant longing.

and a little Foxtrot

For more Y's visit here, at ABC Wednesday with thanks to Mrs. Nesbitt and her helpers.
Posted by Hildred at 9:57 AM 13 comments:

We come home from church and there is a confused and urgent message on the answering machine.

'Please come and see me'

It is my birthday and there is family here and there and more visits expected during the afternoon and evening.  I call back, - 'I cannot come now, but I will come in the morning'

And so this morning, before coffee time, I get out the car and we run to town, the car and I.

My friend meets me at the door of the assisted living facility she has just moved into.  We go to her new and lovely suite, - she has her best cups sitting on the counter and the kettle boiling.  We have tea and a wonderful conversation, with little of the trouble she has with articulation since having a small stroke.

At the other end of this facility is the 'locked' part, where my dearest and most loving friend now lives.  Six years ago she organized our 60th anniversary party!

She has not lost her kind and loving disposition, but all her other abilities have vanished.  We can still talk about old times, as long as we can interpret lost words and I listen carefully and identify who she is talking about.

How cruel dementia is, and how grateful I was to find this morning's visit such a pleasure, and such an easy answer to yesterday's confusion and despair, - only a smile of friendship, a listening ear and a connection with old times, to bring confidence back again....

I press the door to where dementia lurks.
Life bestows a sweet surprise.
Posted by Hildred at 1:10 PM 2 comments:

To bed
awash with music, roses,
the rainbow froth of dancers' petticoats.

Grace and sensuality
Carry me to sleep.
Ah, Vienna

Stone #2, picked up at the New Year's Eve Vienna Philharmonic concert.
Posted by Hildred at 6:28 AM 2 comments:

Labels: aros
Newer Posts Older Posts Home
Subscribe to: Posts (Atom)
"Thou knowest not what a day may bring forth." —Proverbs