I meant to spend the evening watching The Great Gatsby, with Robert Redford.  Well, Robert Redford wasn't going to come around and watch with me, - you know what I mean.  This is the 1974 film of The Great Gatsby in which he is playing Gatsby - gosh, I remember Redford being shot in the Butch Cassidy adventure - this seems to be his destiny, filmwise.

Anyway, I had a late supper, and then a small nap after, when the news put me to sleep.  I thought I should dash off a couple of e-mails, and then I checked my Facebook and saw pictures of my granddaughter's first day in their new home, so I had to comment on that.........  Beginnings are always so full of promise!

When I went to find the DVD I noticed it was after nine o'clock, and I realized that by the time the show was finished it would be much too late to be up with Robert Redford, as he was in those days,
so here I am, on my way to a leisurely bedtime with two of Julian Baggini's books which are perfect for picking up and putting down as the chapters are short and complete.

One of the books is entitled "Do they think you're Stupid" a perfect defense against quackery, superstition, distortion, dissimulation and nonsense.  I get so very tired of reading some of the paranoia that pops up on Facebook - and other places.  The net seems a perfect vehicle for carrying around these silly tales of perceived catastrophe and conspiracy.

I also seem to have overloaded Kobo with borrowed eBooks from the library, and of course they must command some priority or they will disappear from Kobo in the darkness of the night before I have finished reading them.  Somebody must stay up late to put those little 'EXPIRED' stickers on them.  (Oh, uh, does this carry a faint whiff of paranoia?)

So I am off to lock the doors, give Miss Callie her treats, take the pill that gets me through the night without aching bones, attend to morning coffee and check my little night time list to make sure that everything is done, still missing that last goodnight kiss.


Here is a lovely late double lily, - new to the garden - a little counterpoint to the greenery, the yellow daisies and the pure white phlox.. 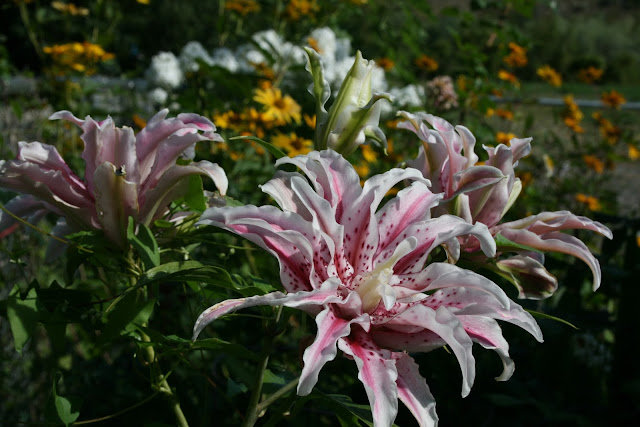 ABC Wednesday
The letter is C - for Chopin

Enjoy four minutes of Yundi Li playing Chopin's Nocturne Op. 9 No. 2
- and, it seems, a couple of minutes of applause.

Click here to find many more interpretations of the letter C, with thanks to all who provide access and maintenance of this wonderful meme.