Slept in until seven a.m. - comfortably and with no little guilty feelings prodding at me.

Awakened to the promise of blue sky and sunshine, and indeed the sun did shine. But strangely.

No. 3 son called to alert me to the interesting ring around the sun, so I grabbed my inadequate camera and did the best I could to get a picture. By putting on my rose coloured glasses and squinting sideways at the sun I was able to see it distinctly, glowing in all it's splendor in the midst of a hazy ring, surrounded on the outside by quite a distinct halo. 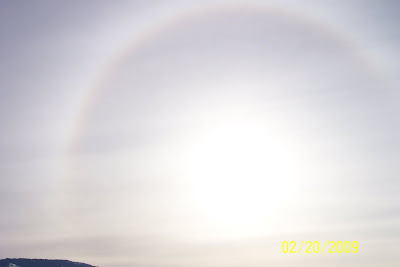 Our artist daughter called to ask me to have lunch with her, and sent me home with three interesting gourds, - one in the shape of a perky long-necked goose, beautifully mottled and covered with little knobs. 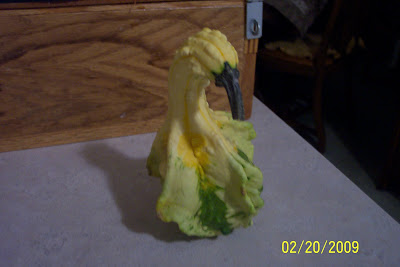 About four or five prints of work in progress (copyrighted) which she kindly gave me permission to reprint here..... 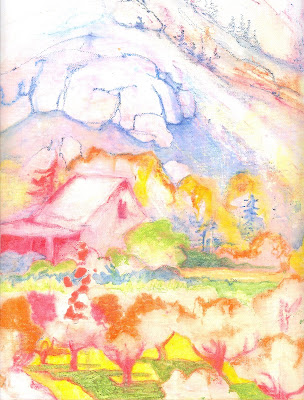 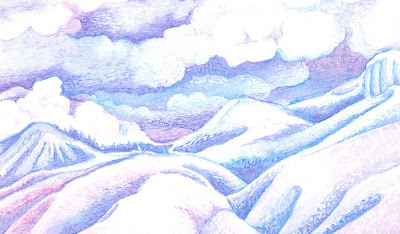 And a VHS on Crop Circles, which led us into a discussion on the future, and the changes it holds for mankind, - the end of the age of logic, quantum physics and a few other things that I find extremely puzzling and out of the bounds of my understanding. But she knows that, so we parted amicably.

When I went to shop the young man behind me at the check out counter was buying four bouquets of spring flowers and carnations, which piqued my interest approvingly. More men should buy more flowers whomever they might be for!

The sun was still shining when Casper and I went out for our late afternoon walk. The air was mild, and I'm sure Spring was at least scouting things out. The ice which formed a tiny skating rink had melted, and there was a puddle in its place, but the snow still continues in the garden.

I fed the birds and then poked around the Lenten Roses, which are still partly encased in ice. However, I found two green fingerlings pushing through the skim of ice on the sunny side of the plant, and my heart smiled!

On the window ledge over the big bathtub three of the amaryllis that were potted after Christmas are almost in bloom. 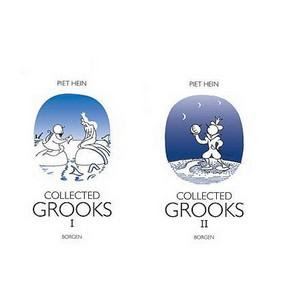 At one time I had both Volumes of the Collected Grooks of Piet Hein. Now I find only Volume 1 on my bookshelves (which are scattered hither and yon around the house).

Did I give the other away? It is quite possible that I slipped it into a gift of books and sent it off in the mail. It would be something I wouldn't mind sharing.

I have always been delighted with Grooks, - well, more than delighted... Behind each verse is a serious thought; a tantalizing expression of common wisdom, - something we all know, and in which we find wry humour.

The Cure for Exhaustion

Sometimes, exhausted
with toil and endeavour,
I wish I could sleep
for ever and ever;
but then this reflection
my longing allays:
I shall be doing it
one of these days.

Makes you perk right up and enjoy each available moment! 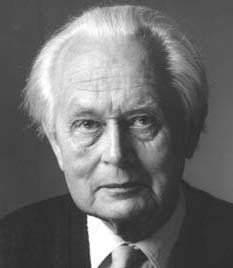 Piet Hein was known as Kumbel Kumbell when his Grooks first were published in 1940. When the German occupation of Denmark became more than an administrative effort, and the dark side of the German agenda became more apparent, Piet Hein disappeared into the Underground Resistance. His Grooks became messages of encouragement to the Danes who were enduring this menacing occupation.

A highly intelligent man with common-sense, Piet Hein, it is said, compares favourably with Albert Einstein and Buckminster Fuller.

The Superellipse, whose shape was adopted in Danish furniture, in parks and stadiums and in city planning, - and whose equation is a little beyond my ken, although I understand the concept.

The Soma Cube - "he conceived the idea of the SOMA cube in 1936, during a lecture on Quantum physics by Werner Heisenberg" and if the link works there are a lot of fascinating details about this addictive combination of shapes.

The game of Hex was invented in 1942 by Piet Hein, and then reinvented in 1948 by John Nash. It got its name in 1952 from a commercial distribution by Parker Brothers and was popularized by Martin Gardner in 1957. Piet was a whizz at formulating mathematical games and engineering mathematical shapes - here is his concept of a free standing egg.... 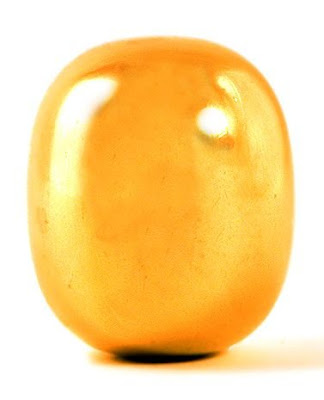 All very astonishing, but my bent is more literal than mathematical, and so I appreciate most his words on The Miracle of Spring..

We glibly talk
of nature's laws
but do things have
a natural cause?

Posted by Hildred at 6:25 PM No comments: 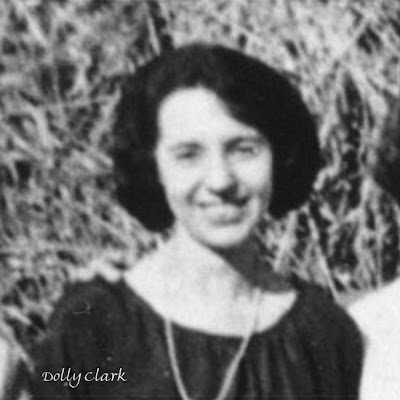 In loving Memory of our Mother, Dorothy Emily Grace Clark
who lived her life with grace and courage
Day by day.
Posted by Hildred at 6:55 PM No comments:

Twilight fell with the snow clouds gathering and a slight scattering of flakes.

The birds all left early for secure nighttime accommodation. Just underneath their feeders, and slightly to the right the snow has drifted about two feet deep, and is frozen solid. Underneath it lies the rhubarb plant. Hopefully its sweet and stubby red roots are beginning to push underground. The ground is still frozen where the ice and snow resist the few hours of sunshine we are getting here in the Similkameen.

Tonight, in Blogland, I read about someone's first pick of spring rhubarb simmering on the stove.

It nigh on sent me out with the pick-axe to clear the snow and ice away, and let the scarlet rhubarb stubs reach for the sunlight and the mild, clear daytime air. I know that the Lenten roses are in the same predicament, and long to open their petals to the sky.

There are promising puddles in the afternoon, as the sun warms the earth and the air, but at night the frost comes again, and in the morning there are small skating rinks all around the yard. If I could return to the days when I was small and bob skates were still an excitement to me, I could have a jolly time out on these little patches, red scarf trailing and rosy cheeks and ears.....

We have the occasional fiery sunrise, and for a little while each day there are small bits of bright blue in the sky, but on the whole the clouds hold sway. 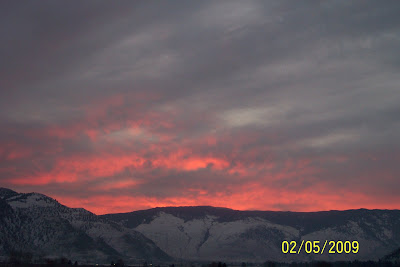 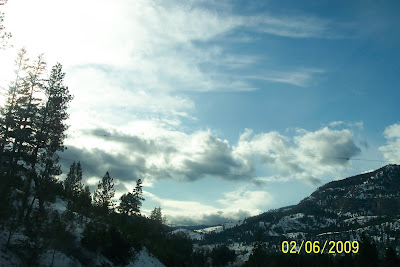 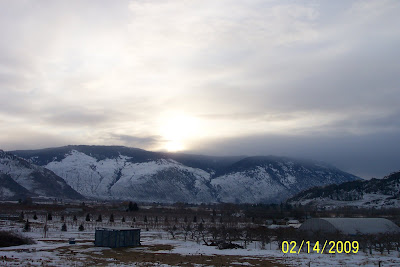 A few days ago, as I rose in the morning, I caught a glimpse of the moon, just slipping away in the west, all glorious and glowing and in a marvelous shimmer. I wished for a camera that could capture its beauty. 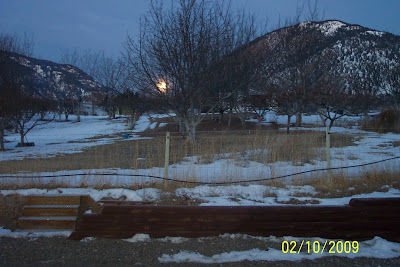 We are fortunate in this valley, where the hills protect us from great extremes of weather, and sometimes the winters are open and mild. The year we left the farm and went to live by the river we planted potatoes on the 4th of March...

I have a few packages of rhubarb left in the freezer, - we will have to be content with a bit of last year's fruit, with some nice creamy custard....or maybe a pie!

P.S. Overnight Winter crept back softly, but with some determination, and we woke to this February fairyland. 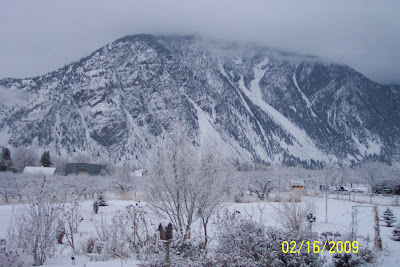 Posted by Hildred at 6:24 PM No comments: