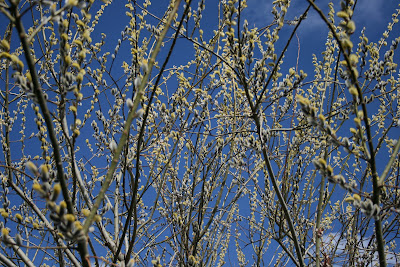 We had a day in the garden yesterday, - blue skies blazing above us and signs of 'sex in the garden' all around us (I saw butterflies and bees, and the pussy willows with their velvety, silvery seeds turning golden as they prepare to spread their pollen,  not via the wind, but by insects that are attracted to their strongly scented nectar.  There is not much competition around for insect attention, so the early bird more or less gets the worm).

And the male catkins on the hazelnut trees, growing longer and more fertile, eager to impregnate the small bright red female catkins concealed in the buds of the tree. 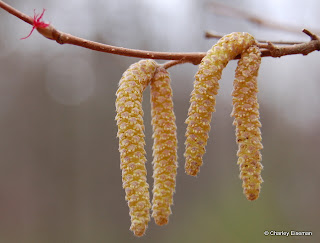 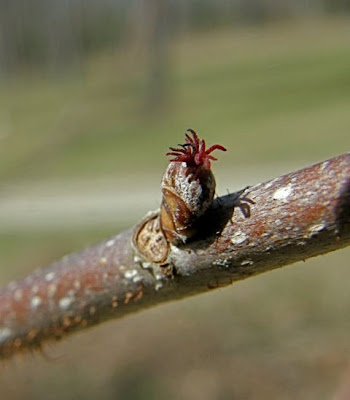 Charles had the shears and the small snipers close by in the basket on his cart, and his eye on suckers and a tidy vision of well pruned shrubs and trees in his mind!!!!  There is no stopping the man.....

I dug out the grass which had grown up between the raised bed and the neighbour's fence, and prepared the ground to plant some of the heritage sweet pea seeds that have been part of our lives wherever we have lived, carried in small containers from the orchard where Charles grew up, and where his mother first planted them circa 1920.

Just above them I plan to have a Sweet Autumn Clematis to lend magic to the autumn garden. 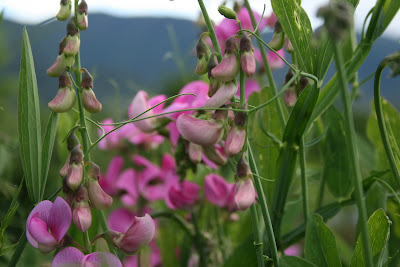 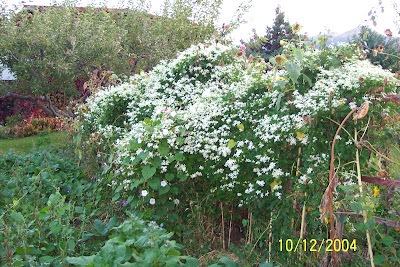 Well, it all wore us out, and so we decided that today would be a day of leisure.

Charles fiddled around with a duet set of lights he is going to install in the computer room while I made oatmeal cookies.  They are supposed to be the product of a fabulous recipe that makes ten dozen cookies, but I have never been able to stretch them that far, - perhaps because we like our cookies larger or maybe because I taste too often....

While I was doing this my mind was very much on the map I have spread on the kitchen table, showing the location and names of the original veterans who first occupied the Fairview Heights Irrigation District on the Cawston Bench.  (It has just passed through my mind that I would like to recommend this venture to present day 'Occupiers' and maybe it would open their eyes to life's realities).


I have started at the north end of the project, studying a map that Charles made many years ago of the original and subsequent veterans (and sometimes non-veterans) and in a couple of cases veterans of the German Army....

I am making notes, dragging forth memories from the deepest recesses of my mind, consulting with Charles and with some our children and also with other old-timers from that era; and with the children of some of the original veterans who have stayed with the land.

Some of the memories make me wonder at the tenacity with which we faced many hardships,  and sometimes the memories of the parties and picnics and friendships we had bring smiles and great pleasure.

I don't think I can record all of our memories without turning the Fairview Heights blog into a gossipy rag but we do have fun recalling them.

After lunch we had a little nap, that turned into a rather extended affair, but tomorrow is another day - Charles will find more branches to snip and I will get those sweet peas planted. and all the plants and trees will continue their passionate springtime affairs.

J is this week's letter

This first day of spring, while March is still roaring around with wild winds, frantic clouds, snow flurries and showers, seems to be the time to contemplate JUNE gardens.

Hope you enjoy the sunshine and warm breeze and relax amongst the flowers of June.