This and That, - Here and There.

A week ago today I was busy stuffing all I could into ONE bag, - carry on luggage to make our quick flying trip to the City (Edmonton) as easy as possible in busy airports.  A sweet and generous DIL volunteered to shepherd me to my sister's Memorial.  A celebration of her life and a wonderful chance to see her children, grandchildren and great grands gathered together in one spot - an opportunity not to be sneezed at!!!

We flew out of Kelowna Saturday, at noon.  All week the valley had been engulfed in smoke from wildfires blazing on both sides of the border, but as we left a welcome rain promised to make some difference in the atmosphere.  We flew above the clouds, but still the mountains were hidden from our view, and we landed in smoke from prairie fires.

Settled in to an overnight motel and had dinner at The Olive Garden, - delicious, and after, a good evening visit with Jeff and Anna (grandson and wife...)  Woke to clear skies and breakfasted at a restaurant that specializes in marvelous hearty morning meals and then off to indulge in memories of my sister's long and creative life, and to remember her, not only with my own memories, but also with those of her dear children and their offspring.

It was a quick trip - we said our farewells and caught the 5.15 flight back to Kelowna.  Home by 7 p.m. and Callie met me at the door with her 'where have you been' meow.

Well, it took a while to recover from all that activity, - talking and walking - and my knees complained loudly, but September arriving at the same time was a splendid pick-me-up!  When the children were home and September saw them back at school nobody was more eager or energetic than I to take advantage of all the fall activity.  I longed to go back to school with them, and for a while I did.  A student once more taking every last English Lit and Philosophy class I could!

September still affects me the same way.  I am anxious to make lists, to read new books.  But mostly right now I have an obsessive yen to 'de-clutter'!  I have a granddaughter who is expecting her third child in six weeks or so, and she is busy 'nesting', but I think as one grows older there is a longing for simplicity and the realization that one must divest themselves of a lot of the things that have accumulated over the years.

Fall and lovely cool weather have arrived early, as did spring.  The months seem to have adjusted themselves, and probably we will have an early winter.  Hopefully with lots of snow in the mountains to relieve the drought conditions we have suffered from this year.

Blue skies and clear air tempted me out to the garden.


The Autumn crocus surprised me in the side bed, and though the roses are finished (will they bloom again in October as they have before?) and the phlox is looking quite disheveled, the barn flowers and the yellow daisies and rudbeckia cast a wonderful golden glow in the crisp air. 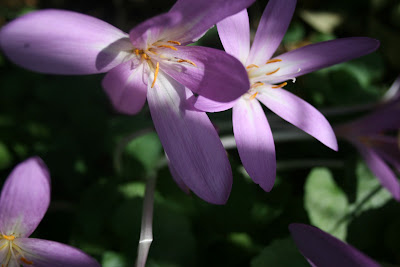 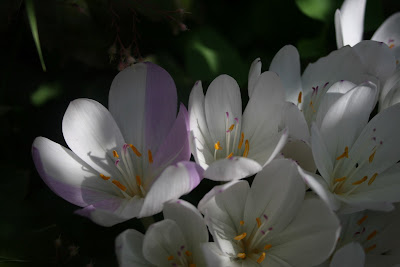 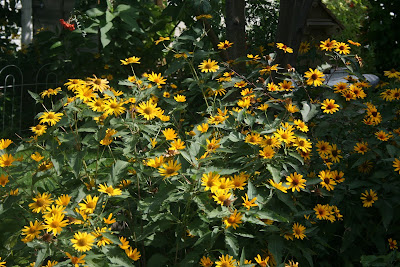 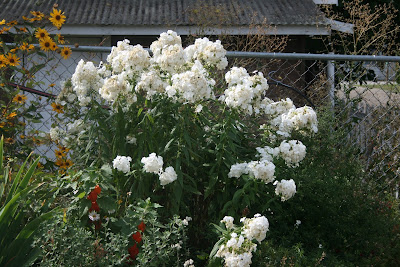 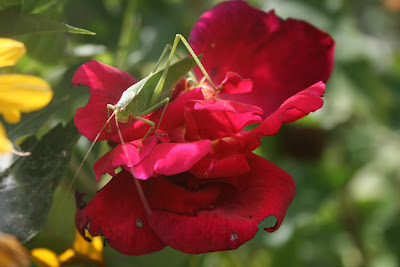 A few leaves are turning on the Elder tree, and there are other indications that autumn is about to
make changes in the garden palette. 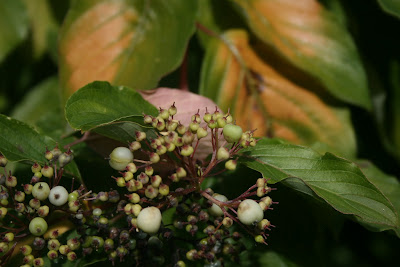 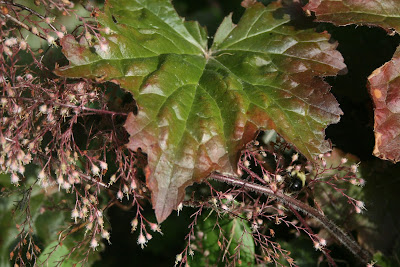 The sedum is starting to turn pink, and the Chinese Lantern are a lovely gift at each stop that the Chinese Railway made in the back garden! 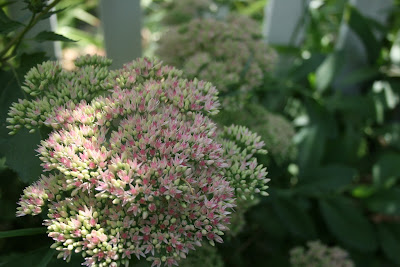 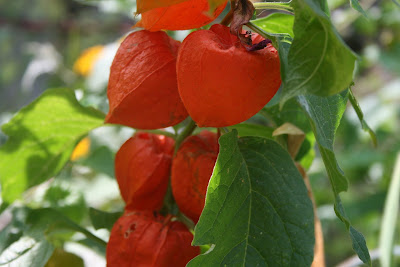 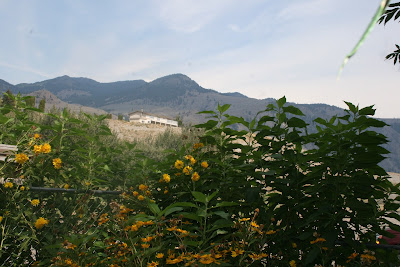 In the orchards they are picking apples three weeks early

Charles loved the fall, as I do, and I remember the back road trips we used to make, and treaure the pictures we took of the seasons turning gently - the grasses drying sweetly into that lovely naples yellow, so that the hills glowed and eventually the trees donned their most spectacular colours to say farewell. 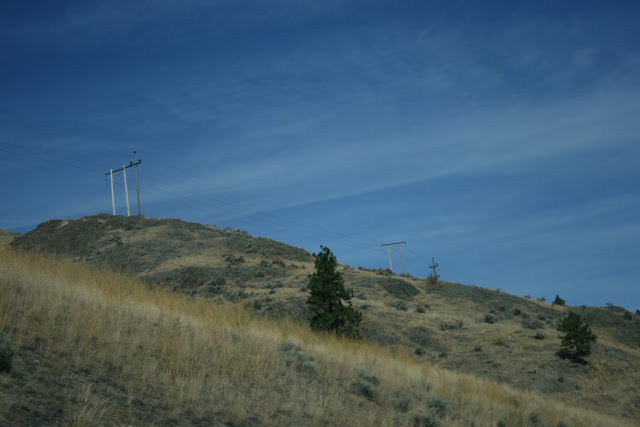 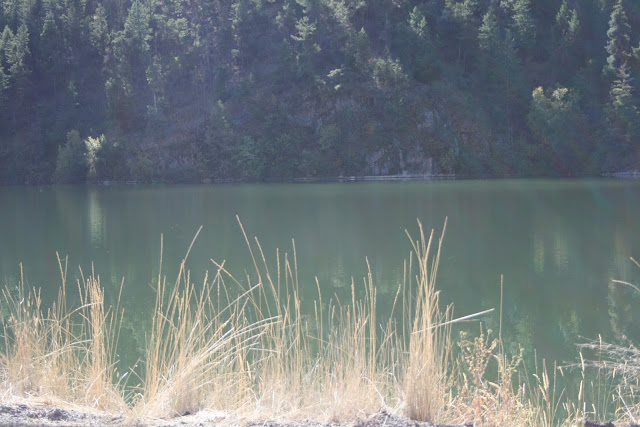 The Letter is H for Harrison Hot Springs

It is the 20th century and we are on our way, down the Hope Princeton Highway, to Vancouver.  Or perhaps we are on our way home..........  No matter, - we will always make the turn off the Highway that leads to Agassiz, through Agassiz, and on to HARRISON HOT SPRINGS, the home of some of our dearest friends.... 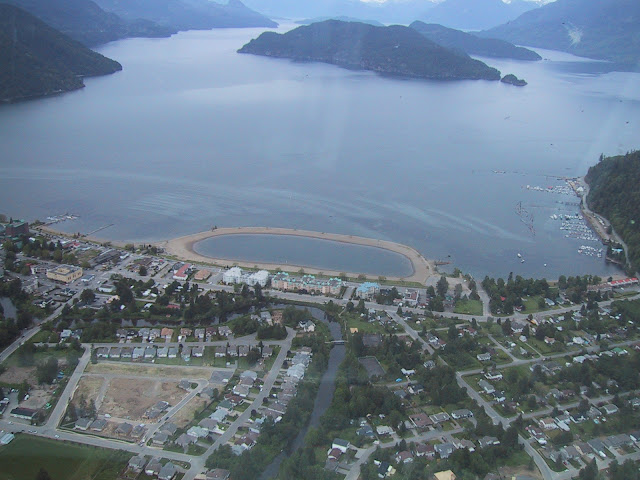 The village of Harrison Hot Springs is a small community (perhaps 1500 souls) at the southern end of Harrison Lake in the Fraser Valley of British Columbia.  The small road winding along the bottom of the cliff in the right of the picture leads to where they lived, - up a steep bank and on to a rocky ledge where Fred has built their home, and from where they can gaze across the lake at the splendid Hot Springs Resort, - or up the lake, past the many small islands that dot the lower end; the beautiful coves, beaches, rock cliffs and waterfalls surrounded  by coniferous forests and snow-capped mountains - truly spectacular. 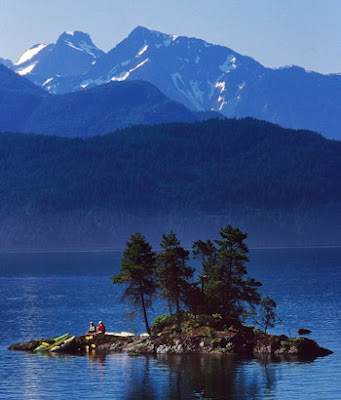 The Coast Salish First Nations people lived along the Harrison River and Harrison Bay.  They called the Harrison hot springs Warum Chuck and believed them to have supernatural medicinal qualities.  For hundreds of years it was their secret alone, - even when Simon Fraser canoed past the Harrison area in 1808 he made no mention of the river or the lake, and later when Hudson Bay explorers discovered the lake in 1846, the hot springs remained unknown.

That is no longer the case!!  By 1860, during the Gold Rush, Port Douglas at the north end of the lake 'bustled with the comings and goings of miners en route to the Cariboo gold fields and Harrison Lake was their main thoroughfare.  So when a storm capsized a party of prospectors one winter they were astounded to find themselves in warm, not freezing waters'.

The springs soon became a popular tourist attraction and the area's first hotel was built, the St. Alice. 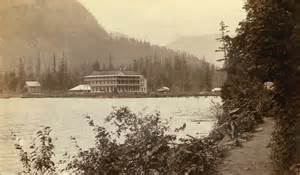 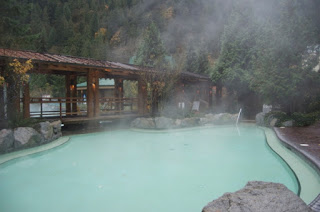 When the heady days of the Gold Rush ended Harrison's economy slumped and they became dependent on the hot springs, as they are today

When in 1920 the St. Alice was destroyed by fire a new hotel was built, and it has evolved into a world class resort.

Tourism has been the mainstay of Harrison ever since the springs were discovered. but today there are many more things to enjoy.  It is a relaxed community, - many of the new developments are owned as second properties by city folk and pre-retirees looking forward to a slower pace of life, and they dress accordingly.  The economy relies almost entirely on the Resort, except for maintenance in the village and small shops that cater to visitors.

Our dear friend, Fred, was born into one of the communities pioneer families;
very much at home on the lake and the surrounding agricultural and timber covered land.
His work in dredging the south end of the lake to rid it of weeds and extend the beach
extended into the Okanagan where he worked the same magic in attracting sun lovers. 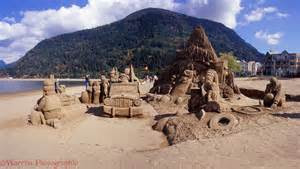 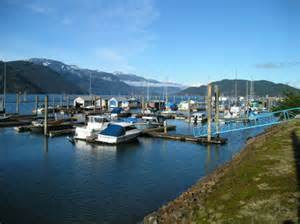 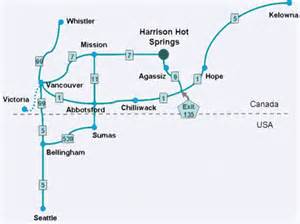 For more interesting Hs visit here at ABC Wednesday
with thanks to Denise, Roger and all hardy helpers....