Let me tell you, nigh on to sixty-four years of marriage and six children can engender a rattling number of pictures, photos, snaps - and this is not counting the years we used a movie camera!

Nigh on to sixty four years of marriage and six children, (plus the cows and the sheep and the orchard and the work outside the farm and husband's fatal attraction to Directorships) - well, it doesn't leave much time to sit down and organize the pictures.

They get left out to look at, and then finally are put away (neatly) in boxes. However, by the time they have been riffled through by various children, or parents, the lack of organized filing is sadly apparent.

I think that probably in the last ten years I have been nudged by the urgency of 'getting things in order' at least a dozen times. I make a start on the job, full of enthusiasm. But you know how it is looking through pictures, - you linger here, over a long forgotten picture, and your mind wanders back as you reminisce about the time and place and the people and the circumstances.

Soon it is time to get supper, or go to town, or someone visits, and everything gets shoved back into the box until another day.

Now that age and mobility preclude us from cross country skiing or any of the other winter pleasures we used to indulge in, there is more time to poke through the pictures boxes and reminisce.

And that is what Charles and I did for a good part of the day.....

To get to the nub of the matter, - last July, when I wrote about cherry pies, and the picking of cherries, I looked for a picture of my father-in-law, taken when he was cutting down one of the large Lambert cherry trees in his orchard.

Today I found the picture..... 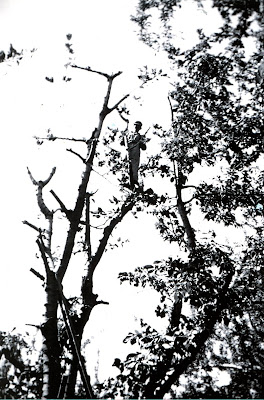 At the time of this adventure at the top of the cherry tree my father-in-law was past his mid sixties! Charles says his mother probably took the picture, all the while muttering imprecations. And small prayers, I would think....

The 20 foot ladder set half way up the tree is the base from which his father started his climb, sawing off branches as he went. A brave and careful man, - he lived to 102.

He who was chosen to pick the top of the tree had to have an accomplice. They went out early in the morning, equipped with pails and ropes, and the cherry picker passed his full buckets down to the ground where it was emptied and sent back up to be refilled. All morning, until noon, his deft fingers gathered the fruit, running the round, sweet cherries along his hand and into the bucket.

As I remember the children always came in with wine stained lips at cherry picking time, and although I didn't eat many cherries while picking them I was a devil when it came to tree ripened apricots!!

O what would the fellows who come around with booms and trucks to tidy up trees say about this daring entrepreneurship.


(When questioned as to what his father was carrying, up there in the blue, Charles replied, ' probably a parachute'.....)

We will be back to the pictures and the memories again tomorrow,,unless the sun shines and distracts us!
Posted by Hildred at 7:26 PM 3 comments:

A week ago today we climbed the pass, searching for sun and blue skies, and here at the top we found not what we were looking for, but beauty nonetheless... 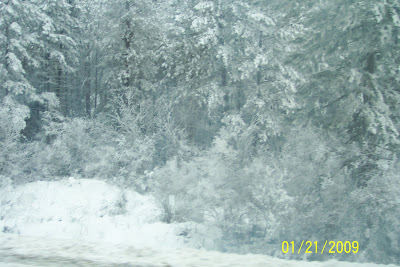 "...the hand that shaped the rose has wrought the crystal of the snow, has sent the silvery frost of heaven, the flowing waters sealed, and laid a silent loveliness on hill and wood and field" Frances Whitmarsh Wile, 1914


This morning's sunrise heralded a day that gradually grew warmer and kinder to old bones and spirits grown weary of Old Man Winter roaring around the hills, and the biting wind that accompanies him. A mild day, - even the faintest and first intimations of February thaws. 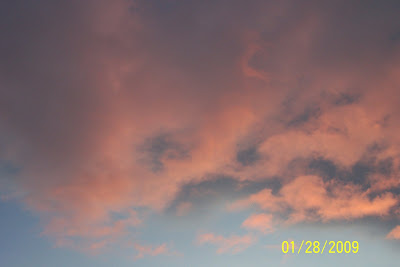 A good day to see things settling down somewhat in Parliament, but at what cost???

Last night I watched the media interview an auto worker, laid off. His wife had also lost her job.

Well, to be generous, he may not have been one of the autoworkers who have been making $70.00 and hour, - he may have only been making $50.00 an hour, - but it makes me very uncomfortable to think that a couple who have had two incomes and who are both drawing Unemployment Insurance should be in such dire straits that they expect the government to rescue them, and the industry that supports them, with a wildly indulgent, throwing-all-caution-to-the-winds-budget.

Hard times come to most of us sometime in our lives. And how we accept them and cope with them is surely indicative of our inner strength.

It dismays me that materialism has become a way of life, - that the thought of having to lower our standard of living is so terrifying.

There are not many still living who struggled with the hardships of the Dirty Thirties. What was there to relieve the dreadful economic times? There was no Unemployment Insurance, but there were Work Camps. 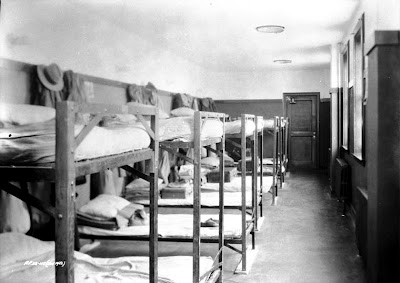 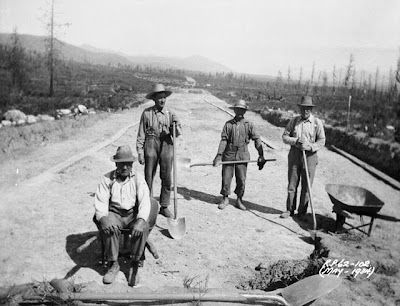 There were no great Infrastructure plans, but you could work on the roads for a few pennies a day...

Thousands of men traveled by rail, searching for jobs.... 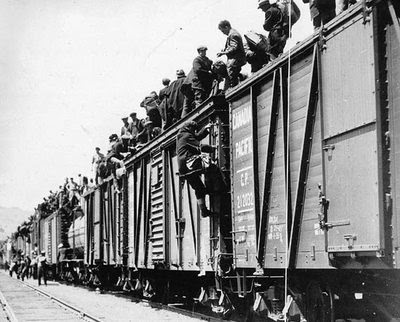 My grandparents lived close to the rail yards, - their gate was marked with the hobo symbol indicating kindness and generosity within.

Out on the farm if you had no gas to get to town, there was always the Bennettbuggy.. 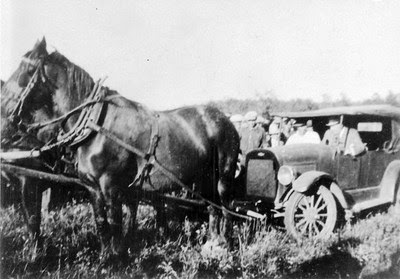 These are the days that not one of us could wish back. These are the days that cause the 'ancients' to still save string, and to fix and mend and make do. But amongst the heart ache and desolation that those years brought there was a strengthening of character, a bonding, a sense of community and an awareness and compassion for each other that inevitably resulted in good times and laughter and appreciation. And a pride in being able to withstand, - a knowledge of your own strength and your capacity to persevere and endure.

I ask myself if this childish reliance on government will at sometime destroy our civilization. O morbid thought....

If we could only temper our 'wants' and be content with our 'needs'.