What to do on a smokey Saturday afternoon.... 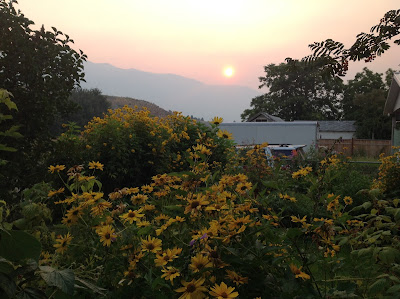 As the sun rose this morning it greeted the Similkameen
with the promise of a smoldering, smokey Saturday
but somewhere the wind changed directions
and although the scent of the air is still reminiscent
of wildfires, in the distance,
it was still pleasant to be outside for a while,
watering the pots and moving the garden sprinklers around.

The house is all closed up, and the A/C hums away...
so nice and cool I am glad of a sweater.

Along about August in days gone by the peaches would be
getting ripe in the orchard, - fuzzy and warm!

The children would be wary of Mother when she came in from picking peaches...
they tell me now!!
And I must admit to being a cranky peach picker until
a shower made me feel civilized again..... 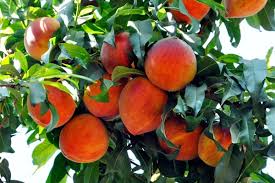 But how we all loved peaches, - dessert was easy those August days
peaches and cream, peach crumble, ice cream and peaches,
peaches and chocolate cake....

After we moved to town, bereft of fresh peaches right off the tree,
I used to go to fruit stands and beg for their over-ripes,
(which they didn't sell to tourists)
hurry home, slice them up, and Charles and I would be in peach-heaven! 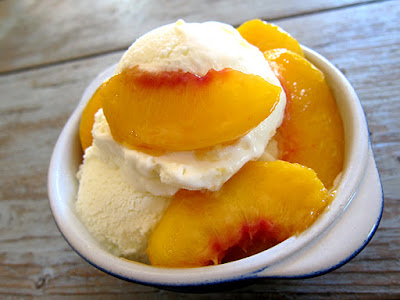 Because it is really not wise to be out gardening while we are bathed in smoke
I have been keeping busy in the house.
Well, not busy cleaning and re-arranging cupboards,
or dusting, or baking.....
just busy in the loom room and reading a bit.

I had hoped to start off August with a bare-naked loom, and I did
finish the garden scarf I was working on
but when it was all done and I threw the last pick
I discovered I had probably a yard and a half left on my warp,
quizzical as to what I was going to do with it!!!

I also have four bobbins of 20/2 white silk
and two bobbins of green silk, left over from other projects,
and I am hoping that they will stretch to make a rather shorter scarf
with a rather longer fringe on it!!! 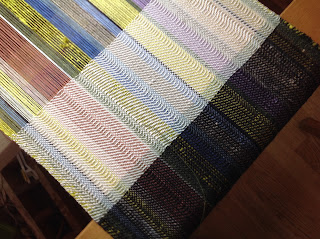 As to the reading.....whilst roaming through blogland
I came upon a recommendation to read
Phil Rickman's series about Merrily Watkins, a Vicar
(Priest in charge) of a parish in  Bedfordshire (or Hertfordshire,
depending upon when the boundaries were changed).
In any case, from the home of some of my ancestors, which tempted me to
read at least the first book "The Wine of Angels"
I am at page 71 and think I am going to enjoy it!

I have also been fiddling with the ukulele, if that is possible....

The other day I came upon the ukulele chords for "Bring me Sunshine",
which I love.... and they are easy enough for me to play.
I strum away, and sing to myself, missing
Charles who always helped me stay in tune when he sang beside me....

If I wasn't a church-goer and still believed
what I learned in Sunday School I could imagine him
looking down from heaven (gold streets, clouds, harps, etc.)
but there, the years have confused me and I don't know where his spirit is.
I feel him close and the memory of his lovely clear tenor is very dear, -
and I imagine what fun we would have had if I had discovered
the ukulele earlier....

The letter is D for The Dolomites 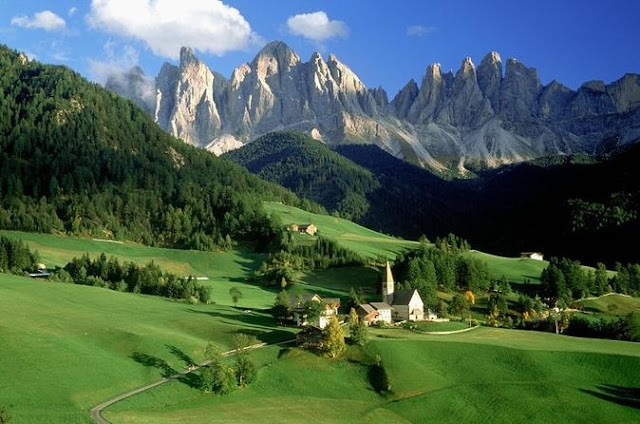 A mountain range in Northern Italy

The Dolomites are also known as

They take their name from the
carbonate rock, dolomite

The Dolomites are renowned for skiing in the winter, 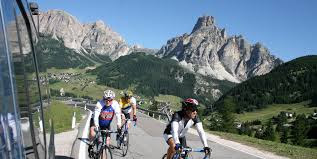 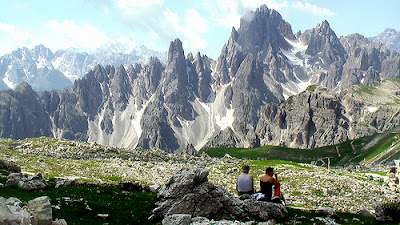 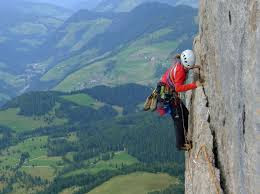 As you can image

and here is a bird's eye view of


More Ds here http://abcwednesday.comat ABC Wednesday
with thanks to all who maintain this meme

Sunny Sunday Morning - This and That


Saying goodbye to this hot, hot dry month of wildfires
resulting in a dire game of musical accommodations
for those poor people in towns affected by the flames that have been devastating
the central part of our Province. 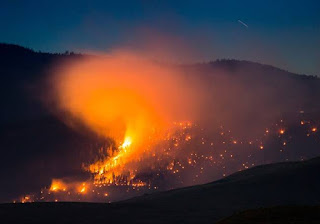 So many families leaving homes threatened by fire;
so many other little towns nudging over to make room for these evacuees
and welcoming them with hospitality and compassion.

Will August be any better?
The weather makes no promises for rain in the next three weeks
but the last two weeks of August have invariably been damp and cloudy,
and one can only hope.....

Our own dear ones still under Evacuation Orders,
but like so many in the Chilcotin who have stayed home to protect their property,
were elated to finally get into town (after three weeks)
to re-stock groceries and farm supplies
and that little refreshment after a long, hot, smokey day!!!

I hope to greet the new month with an empty loom,
having great and illustrious visions of finishing
my Summer Garden Scarf today. 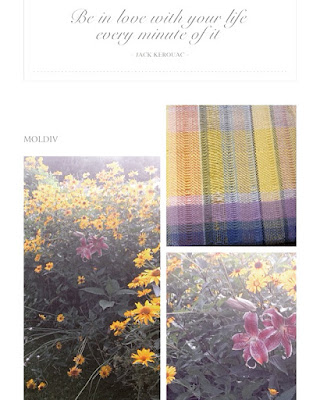 Sometimes my hopes, no matter how great or illustrious, forget
to take into account the amount
of energy available to me in one afternoon!!!!

Tomorrow is the last day of July, so that gives me
twenty-four hours grace.......

Here in mid-summer, as the days grow shorter (than they were)
I take Bruce out for his evening jaunt a little earlier
and at the end of the lane the sweet sliver of the new moon
grows a little each night.
If it is dark enough a gleaming scythe, holding
the old moon in its arms. 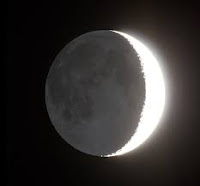 That choice of words is quite ominous and I didn't mean it to be
It is really very beautiful, despite having rather
dark connotations!!

During these summery days when the car finds a home
at the front drive-in, rather than in the garage,
it has been easy to hop in and go visiting or to shop
but lurking in the back of my mind  l am conscious of the fact
that the Superintendent of Motor Vehicles is going to run his finger
down the list of drivers in their nineties
and when he discovers my name he will immediately jot it down
on the list of the ancient who will receive orders to visit
their Doctor before the next birthday rolls around
so that he can examine your wits, your eyesight, and any other physical factor
which might give the Doctor pause to recommend that
you continue to drive.....

I ponder this, and wonder if I should make the effort to keep my license.
I don't worry too much about my wits and general health,
but I know they place a great emphasis on eyesight
and IF I plan to continue to have that precious piece of paper I must
make an appointment with the Optometrist, Dr. Zak,.

Which brings me to my next "this and that" for the month...

Charles mobile electric cart sits in the garage, fully charged,
just waiting for me to feel less vulnerable when I take it down the lane,
trying to get familiar with the beast. 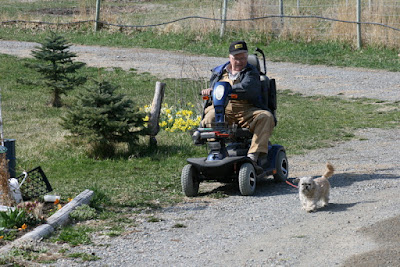 Last Sunday I went for supper with a dear son and DIL
and during the course of the meal the subject of the cart came up,
and my reluctance to use it.
Son said - "It's just that she doesn't want to be seen on it..."
And I have to acknowledge that he is right.
Dratted ego again!
Don't want to appear ancient
and one of the crowd who swish down the road,
flags flying on their mechanical cart...

So that is on my August list, (as it has been on every monthly list
for the last three or four years)
But this time I am DETERMINED.

On my list for today is the creation of a number of small quiches
(company coming for lunch during the week)
and I think it is time for kitchen duties.

Tomorrow I will pay obeisance to the White Rabbit,
but today I must say farewell to July
and put the air conditioner on...