WHAT DID I DO LAST THURDAY - THAT FOGGY, FOGGY DAY!


Well, first of all, I pondered amidst the dismal gloom.

After a while I took to my knees, - gazing into the innards of Honey, the loom, and searching for inspiration.

I was not exactly enthusiastic about Husband's idea of tipping Honey up, thus bringing into easy access her nether parts under the treadles, but I had to find some way of reaching the cords which needed to be attached with more precise measurements than had been achieved so far.

It finally occured to me that if I were to lift one treadle at a time with a looped linen cord attached to the beam I could maybe even sit on the little three legged stool I keep beside the loom for such extingencies and reach under the treadles with a minimum of effort. (FOCL) I don't acknowledge "a minimum of effort" any more, - just doesn't exist in my life these days.

When I was at the library today I watched a young woman with a beautiful free and bouncing walk, - full of the joy of living, - and I sighed and thought, "I used to walk like that, and revel in it".

Be that as it may, look at the picture below and imagine the depths to which I had to sink these stiff, sore knees! The pinn 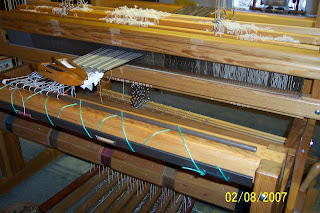 acle of effort in situations like this is in resuming your former upright position. Yikes! That surely deserves some kind of golden compensation.


And so it happened! The operation went off smoothly while Husband was out for coffee, and by the time he came home I was ready to take a deep breath and remove the locking rod from the jacks. Nothing moved! The shafts, the lamms and the treadles all stayed in balance.

I said a quick and fervent thank you, took 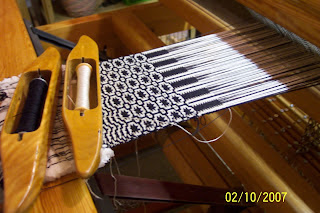 another deep breath and pressed down the first treadle. The resulting shed was a joy to behold- firm and clean and at least 5 inches high. Wowy!!! I have to say that as I progressed down the line of treadles closer to the pivot point the beauty of the sheds diminished somewhat, but it was still a weavable situation and I started off with glee.

Two days later I am feeling that lovely euphoria that comes with achieving a certain degree of success, and I have decided that perhaps I am still up to Honey's demanding ways, and won't need to replace her with the four harness LeClerc just yet. Another victory along life's aging way, - another dilemna vanquished!!!

Life is good, - spring is coming!
Posted by Hildred at 8:55 PM No comments:

Every gardener knows that under the cloak of winter lies a miracle ...
a seed waiting to sprout, a bulb opening to the light, a bud straining to unfurl.
And the anticipation nurtures our dream.
- Barbara Winkler

And so do the puddles in the driveway, and the ice which has coated the road, now in the process of decay.

And the faint fragrance of a promised spring that lends a bit of bouyancy to the step and a smile to the face.

Winter is wonderful, but when it outstays its welcome a little frantic depression sets in, as when one longs for company to leave: company that at first was cherished and entertaining, but after a while becomes wearisome and eye glazing.

From December to March, there are for many of
us three gardens -
the garden outdoors,
the garden of pots and bowls in the house,
and the garden of the mind's eye.
- Katherine S. White 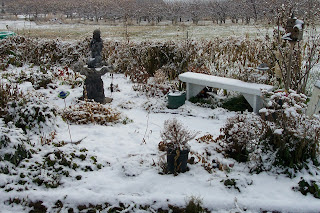 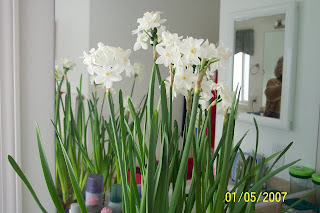 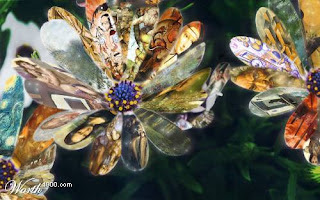 Today I rescued the garden book from where it had been abandoned in November, and tried to envision the back yard, transformed from a tarp covered pile of practical treaures that will soon find a home in the new garage to an inviting spot to nourish the birds, please the eye and look nice and neat and tidy!!!

I know that our efforts must be minimal, considering the limited energy we have to expend, but I can see a wonderful array of sunflowers and grasses - simple but strikingly cheerful.

Ah dreams and fragile plans - they are the substance of our lives and we strive to bring them to fruition.

In the meantime, - while we wait for spring - the struggle continues to balance the treadles and lamms and shafts to accommodate this elegant but skinny warp I have put on the loom with such anticipation. Husband is advising tipping the loom to make it easier to reach the treadles, and be more precise about the tie-ups. I view this with some trepidation, but see the advantages to not lying on the floor reaching under the loom and blindly counting the number of loops in the tex solv before I insert an arrow pin. And besides, Husband has proven over the many years that we have existed together to be most often right! This adds to my security, but it is also a little irritating, if you know what I mean!!!
Posted by Hildred at 7:29 PM No comments:

Today Husband and I closed a door on a part of our life that has consumed a great deal of energy, required a great deal of commitment, and has brought with it a sense of accomplishment, a sense of frustration and dismal discouragement, much love and friendship, and finally, - closure.

The swinging door closes, and with an extra little push it opens on a brand new world where the sun shines, mild breezes blow, and the air is fragrant with the scent of freedom - figuratively speaking.

More time for this, - more time for that....with the Ego laid to a well deserved rest the mind gives us permission to frolic (so to speak!) The vista opens on a certain amount of liberty to pursue things that have for a long time been neglected. Visits to old friends, (the number of which seem to diminish with each passing year) so that this has a priority that we ignore at the risk of melancholy regret.

Time and the inclination to pack a picnic lunch and go exploring, perhaps with a fishing rod packed in the trunk in case we find a pleasant stream.

Time to dream dreams and make plans for the back yard - to plant some more trees that we will probably never see come to maturity, but which will give us shade and pleasure for the years left to us.

Time to weave with some kind of serious commitment to it.

Time for music, and reading and irresponsible hours. (Can two depression raised people ever achieve irresponsibility???)

Time for husband to cultivate the habit of casual coffee and lunch visits with friends and to organize his workbench for happy hours of fixing and fiddling.

Most importantly it is time to wake to a day free of fretfulness about dissension. That is a wonderful gift - life is how we perceive it, and a mind freed from dratted worry is a mind alive and open to new adventures.

Perfect days! Happy days! Now, if I can just get the loom to gather herself together and start to work in harmony, - shafts, lamms and treadles all working in sweet cooperation, - what bliss!!!
Posted by Hildred at 8:06 PM No comments:

Labels: The Swinging Door
Newer Posts Older Posts Home
Subscribe to: Posts (Atom)
"Thou knowest not what a day may bring forth." —Proverbs