Out in the garden
slumbers
the beauty of June.

Under the garden
tendrils
stretch and anticipate 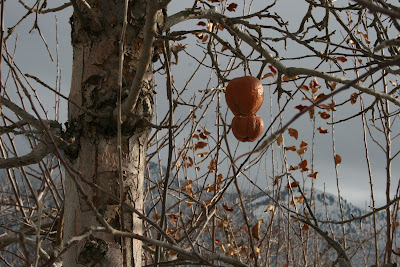 Abandoned apples,
mildly fermenting,
awaiting their debut
at the Starling Bar
River Stone #14
Posted by Hildred at 11:01 AM 4 comments:

A slight lapse,
and gently the wings
slip under the weary body
and carry the old
heavenward.
Posted by Hildred at 10:11 AM 11 comments:

It was remiss of me not to include the name of the painter with the picture on my header, and so I tell you now the story of  Landscape with Snow painted by Vincent van Gogh on February 24th, 1888. 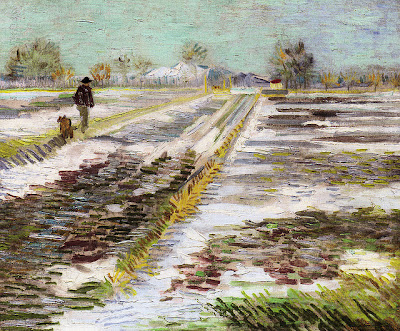 As I reminded myself of the life of Vincent Willem van Gogh, and checked for facts which seem to have reached me by osmosis over the years, I was dreadfully saddened by the frustration and turmoil of his life.

He was born in 1853, the son of a pastor, and his upbringing was religious and cultured.  His sister described him as a 'serious and introspective' child, but it seems as he approached adulthood his ability to cope was affected by a tendency to excesses and mental illnesses.

After several failures as a clerk, an art salesman and a preacher in Belgium where he was dismissed for overzealousness, his brother Theo (four years younger and devoted to Vincent) urged him to apply himself to painting, and throughout the eleven years from 1879 to 1890 Theo supported him financially and with brotherly affection encouraged him.

In 1886 Vincent came to live with Theo in Paris, but two years later, seeking a warmer climate and a brighter atmosphere, he took the train to Arles, in the south of France.  Alas, when he dismounted from the Train in February of that year a he was confronted by a snowy landscape, but four days later, when the snow had begun to melt, he painted Landscape with Snow, the picture in the heading.

It is noted for it's pale lilac colours in the mountains and in patches of bare earth.  A comment made on this work suggests that it may 'have been inspired by the snowy scenes   common to the Japanese prints van Gogh avidly collected, but it also follows conventions of the 17th century Dutch landscape painting in its gradation of color from dark greens and browns framing the foreground to blue sky in the distance, and through the diagonal recession of the road in the snowy landscape.  But, unlike Dutch panoramas with their broad expanse of sky, the present work shows van Gogh concentrating on the terrain between where he stands and the bright red-roofed cottage in the distance".

A few days later Vincent did a similar painting, 'Snowy Landscape with Arles in the Background'. 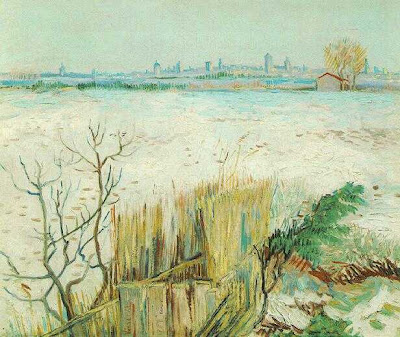 Vincent was able to settle in Arles,  renting four rooms in the famous Yellow House.  In this painting the rooms where he was able to create a studio, have friends in and regard as home are the ones with green shutters. 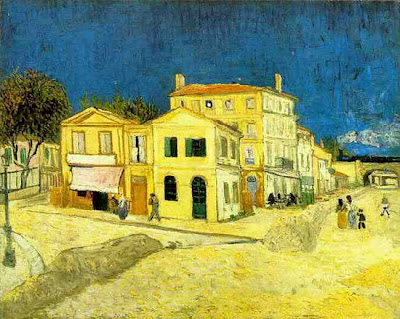 In the fall of 1888 Vincent invited Paul Gauguin to come and paint with him.  In the beginning they worked well together, producing marvelous sunflower and vineyard pictures.  Van Gogh's picture of The Red Vineyard was the only one of his painting that he sold in his lifetime, for which he received about $1,000.00 in modern money.  In a letter to Theo he describes it thus "a red vineyard, all red like red wine.  In the distance it turned to yellow and than a green sky with the sun, the earth after the rain violet, sparkling here and there where it caught the reflection of the setting sun." 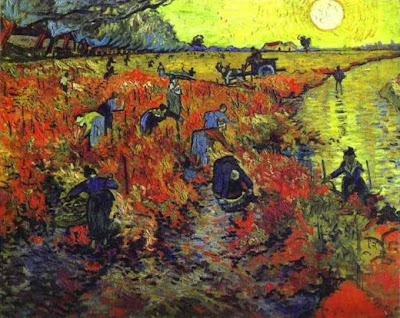 During the years that Vincent painted he was continually plagued by periods of mental illness and after a few weeks the relationship with Gauguin became stormy, culminating in a night when Vincent came at Gauguin with an open razor, and when Gauguin fled, van Gogh cut off part of his own ear.

His illness became more severe.  Eventually he admitted himself to an asylum in Saint-Remy, and in May of 1890, seeming much better, he went to live in Auvers-sur-Oise under the watchful eye of Dr. Gachet.  Two months later, on July 29th 1990, and after a fit of painting activity he shot himself in the chest.  He survived for two days, and a devastated Theo was at his side when he died, his last words being 'La tristesse durera toujours' (The sadness will last forever).  Theo, unable to come to terms with his brother's death, died six months later and in 1914 his body was exhumed and buried next to Vincent.

Van Gogh was a prodigious painter and his finest works were produced in less than three years in a technique that grew more and more impassioned.  "He was completely absorbed in the effort to explain either his struggle against madness or his comprehension of the spiritual essence of man and nature".

During his lifetime van Gogh painted thirty self portraits, as an exercise in improving his painting when he could not afford models.  I was impressed by the following video which shows a progression of his life, and presents his portraits at the various stages of his mental health.


Not too many years after his death his fame as a painter grew higher and higher, and today he is recognized as being the most famous of Dutch painters after Rubens.

I was very much affected by reading of Vincent's life, and so it led to A River of Stone.

My heart sorrows
for those to whom
peace never comes.
Posted by Hildred at 11:33 AM 5 comments: 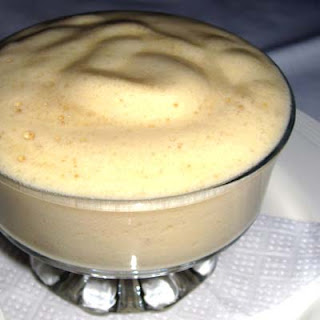 The recipe is here

Simple, smooth and delicious, -  exotic and comforting all at the same time.

For more interesting takes on the letter Z visit here, at ABC Wednesday.

and praise Italians
Posted by Hildred at 10:39 PM 23 comments:

Well, why not!.  Our adventures these days are small scale, but when the first tender green grasses appear on the mountain side and the yellow bells and mariposa lilies lend a sweet grace to the rocky crevices we consider a few hard boiled eggs, some homemade bread, a little wine, and a trip up the mountainside to McIntyre Creek, where memories of panning for gold await Charles, at least.  For me a new experience.

Please, do not hold your breath while you wait for him to recount the trips he made with his father into the hills behind Oliver, but I will tell you when his posting finally shows up on From the Back Pasture.

In the meantime, suffice it to say he still has vivid memories of  travels on the sloping hillsides in a 1928 Chevrolet, and the excitement of prospecting for mica, gold and silver in the creek with his father and brothers.  I will let him tell you the stories as he has told them to me, and it will be an inspiration for him to once again follow and record these childhood memories.

Each day
a later dusk
speaks sweetly of Spring
Posted by Hildred at 4:39 PM 7 comments:

Labels: aros, lengthening afternoon
Newer Posts Older Posts Home
Subscribe to: Posts (Atom)
"Thou knowest not what a day may bring forth." —Proverbs