I woke this morning to a certain lightness in the East, - small patches of blue sky, a few white clouds, and some delicately touched with the coming sun.... lovely!!!!! 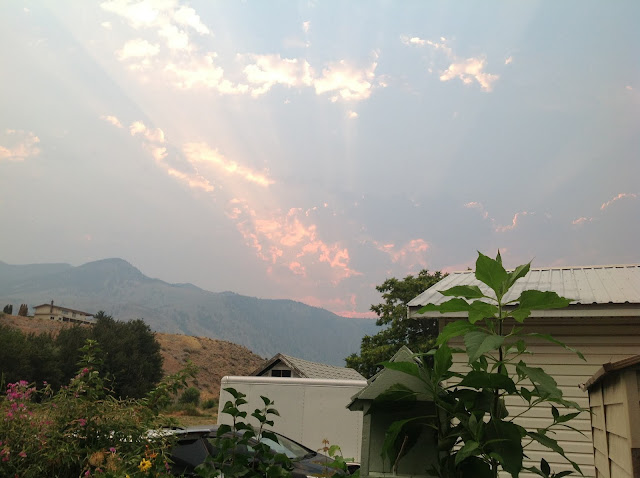 Yesterday had been such a dull and oppressive day, - the valley full of heavy smoke from the wildfire down aways,  which they say will not be gone until some time in September. And the steady throb of the four heliocopters. bucketing water from the Similkameen to dump on the advancing fire.......

Doors tightly shut and windows all closed. I bent my head over the loom and wove a bit on the adventuresome black and white placemats I am making for Christmas presents. 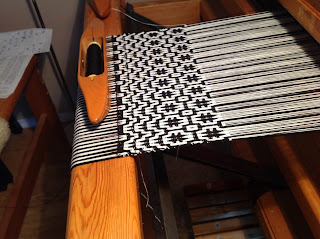 and when my back said, sternly, "that will be enough of that" I went to comfort it in the easy chair, whilst I read and looked for culinary inspiration that made "meals for one" look attractive.

Soups are good for lunch, and the book where I searched was one written by Margaret Hayes whose seasonal selections had been published in her husband's newspaper.

This book is not only great for recipes, but also for the thoughtful and descriptive prose which she interspersed amongst the recipes.  Much of her writing is about family, and a fair amount about the beauty of the Okanagan Valley, as it was probably thirty years ago before it became so populated and touristy.

She says about a blackbird morning...

"On a tall, leafless tree branch pointing upwards to a busy morning blue sky, a large blackbird sat alone, swaying this way and that as a light breeze caught and ruffled his cola-black feather.
I stop and crouch on the grass, unmoving, observing.
The birds head swivels, his ever watchful eyes, dark and aware, take in all unusual movement.
The, when he felt all was safe, his yellow beak opened wide and magical notes came burbling up from the depths of his rich, red throat, notes soaring and diving with ease to what one might imagine to be impossible heights and depths.
The sound was liquid, as soft oil tumbles from a bottle;  easy, soothing."

It is her awareness as well as her collection of wonderful recipes that keep her cookbook secure amongst the more elaborate publications.

I am intrigued by her entry for Irish Coffee...

"the way tis' served all over Ireland.

First warm a stemmed whisky glass.  Put in the sugar and enough hot coffee to dissolve the sugar.  Stir well then add the Irish Whisky to fill within an inch of the brim.  Now, this is the tricky part;  hold a teeaspoon, curved back side up, across the glass and pour the cold cream slowly over the spoon.  Do not attempt to stir the cream into the coffee.  It should float on top and the hot, whisky-laced coffee drunk through the cold cream.  "Slainte 'gus Saol agat!"  (Health and long life to you)

However, I digress.  I was looking for a recipe for summer soup that I could make, and freeze in small jars, and that would get me through August lunches until it is time for more hearty September hamburger soup.

Which brings me to the Vichyssoise.......

Margaret says this about it...

"Cool soups are very refreshing for lunch or for a pre-dinner savoury, especially if the days are hot.  Make your soups ahead of time, preferably in the early morning - and life will become less of a hassle."

Wash leeks and slice white parts only.  (use green parts for casseroles or stews).  Peel and slice potatoes.  Melt butter in a pan, add leeks and potatoes and cook very slowly without browning for 17-20 minutes.  Add stock, bring yto boil, cover and simmer gently for 30 minutes until vegetables are very soft.  When cool, put in blender, or sieve.  Put soup in bowl and chill.  Just before serving mix in the cream and seasoning to taste.  Serve sprinkled with chopped chives or tarragon."

I sigh a bit - it all sounds so elegant.  Then I remember the package of Cream of Leek soup I have on the bottom shelf of the kitchen cupboard, and that, alas, is the Vichyssoise I have for lunch.

But perhaps you have company coming and would like to make it Margaret's way!! 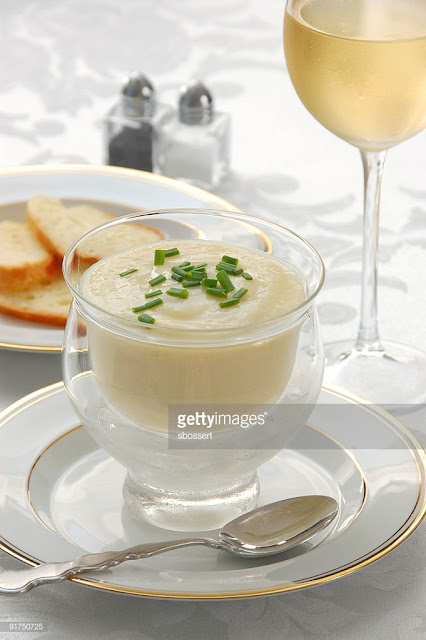