The letter is Q
Q is for Quince 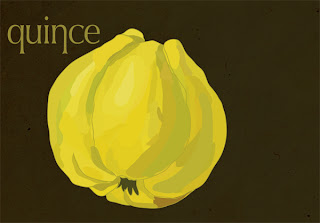 Here is the Quince in blossom today along the side garden... 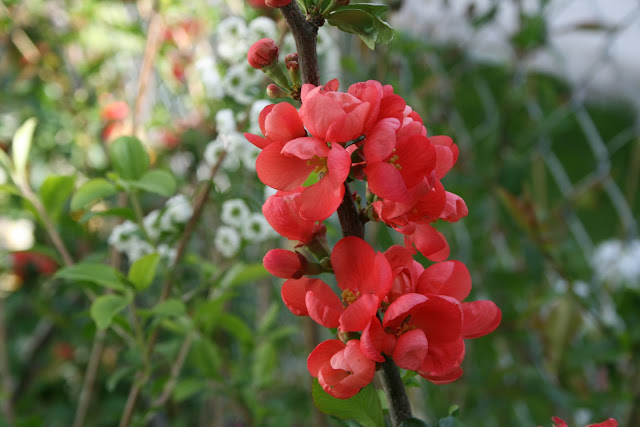 and as it looks in the fall, when it matures to a bright yellow 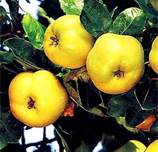 The Quince has a romantic history.  A native of Persia, Greece and other Eastern localities it figures
prominently in ancient literature and classical legends....  It is believed in some scriptural circles that the Apple, translated, was the Quince and it is supposed to be the fruit alluded to in the Canticles,

"I sat down under his shadow with great delight and his fruit was sweet to my taste';  and in Proverbs, ' a word fitly spoken is like Apples of gold in pictures of silver.'  The Quince was held sacred to Venus, regarded as a symbol of Love and Happiness. and the 'golden apples' of Virgil are said to be Quinces

All well and good in warm climes where the Quince matures into a soft, juicy fruit, but in colder parts of the world the fruit is hard, more like that of an immature apple or a pear.  The rind is rough and woolly and the flesh harsh and unpalatable with an astringent taste.

Not appealing to be eaten out of hand, but perfect for Marmalades or Jelly.
Quince Marmalade

Pare and core the Quinces and cut them up, putting them into water as they are cored, to prevent them from blackening.  Put them into a preserving pan with one pound of sugar and one pint of water for every pound of fruit.  Boil over a gentle fire until soft.  Then put them through a sieve, or mash with a spoon, boil up again and tie down in the same way as any other preserve.

In France, before putting the marmalade into pots, a little rosewater and a few grains of musk, mixed together, are added.  (I told you it was a romantic fruit).  This is most delicious and among the French, by whom it is called Cotinat, has a reputation for its digestive powers.  This I learned from Wikipedia....

For more interesting takes on the letter Q visit here at Mrs. Nesbitt's ABC Wednesday, with thanks to her and her Quirky Helpers.
Posted by Hildred at 3:32 PM 12 comments: 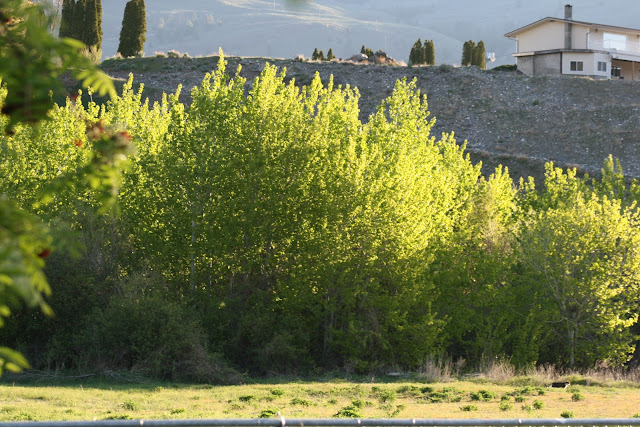 A sterling chain of gorgeous days has kept me outside; in the garden, visiting plant sales, working my small, limited time in the church's outreach Bargain Centre (where I also found three perfect blue pillows for the outside bench),  and redistributing dirt into all the pots I could find so that tomorrow I can go to the garden nursery and indulge myself in wonderful flowers and veggies to fill that motley collection of containers. 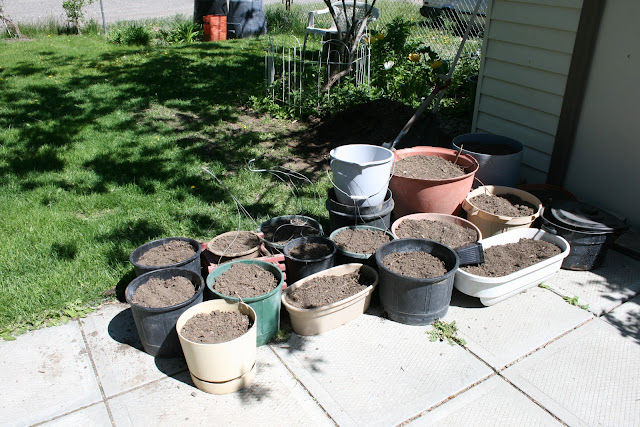 The new blue pillows also inspire me to go to the paint store and spiffy up the benches they sit on with a new coat of paint.  White or blue, - what do you think?  These were left by the former owner - Charles said they were in such rickety condition they probably wouldn't have made the move to the northern reaches of the Province......but I like them, and we both enjoyed morning coffee here. 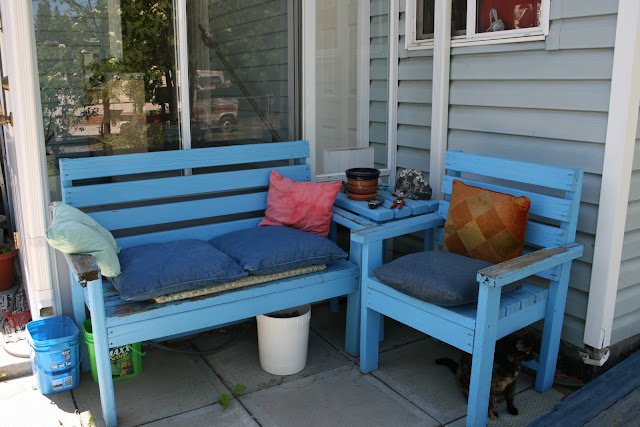 I find myself to be a little redundant at the Bargain Store; useful only for re-hanging and straightening out the crowded racks, removing empty hangers and engaging in conversation with our many customers.
It is true that I have put in my time at the Bargain Store over the years when my energy was at a higher level, but even if just for morale I go gladly for a couple of hours twice a week when it is the Anglican Church Women's turn to take part in this village outreach.  Well, it's more than the village, - we also sort and send donations to the Gleaners, the Salvation Army, the Women in Need, and anybody else who calls upon us for help.
I  found a couple of old cotton T shirts at the Store and plan to turn them into a garden statue on Tuesday.  At a Paverpol statue workshop...... 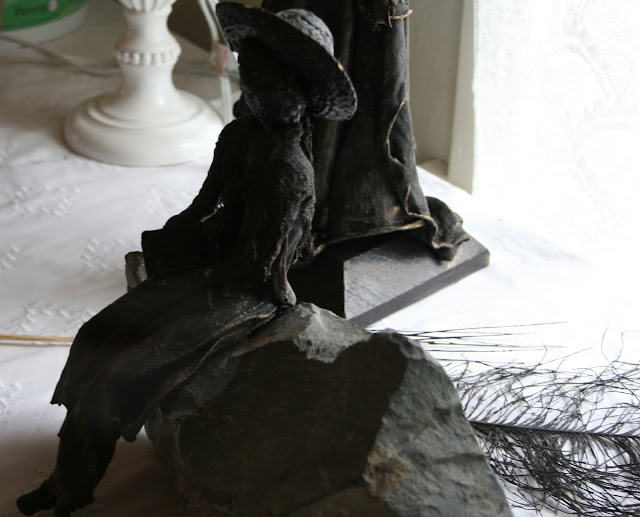 I would like to make a lovely large heron to brood over in the shady corner of the garden, but I think perhaps it is a little too ambitious for a first time endeavour.
I saw these statues at a local art show a week or so ago. They are made with wire and strips of cotton and Paverpol, of course.
I went to the show with our son, Sid, who was showing some of his soapstone carvings, and I took along a basket of weaving odds and ends for interest's sake. 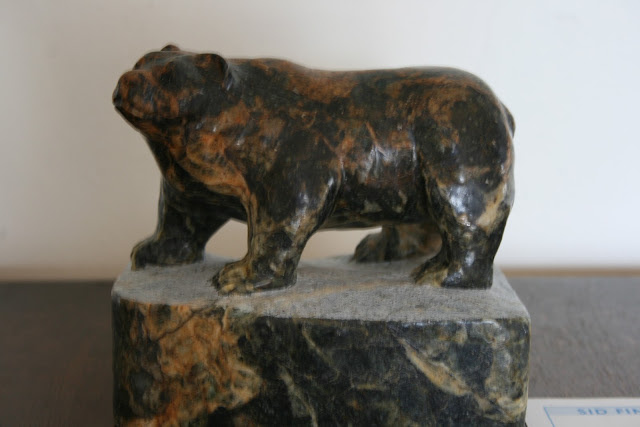 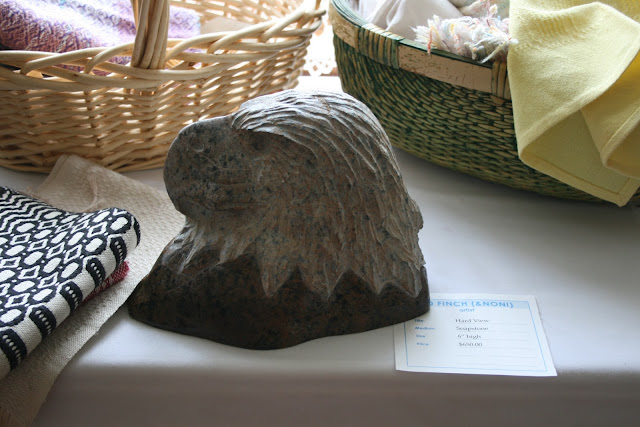