An Autumn drive through the Valley


O Autumn, laden with fruit, and stained
With the blood of the grape, pass not, but sit
Beneath my shady roof; there thou mayest rest
And tune thy jolly voice to my fresh pipe,
And all the daughters of the year shall dance!
Sing now the lusty song of fruits and flowers.
William Blake To Autumn
October has been chiding September for being cold and miserable, and bringing us the consolation of blue skies, still crisp days and the chance to enjoy hours in the garden planting bulbs, moving perennials that have grown too vigorous and crowded into their neighbours space;  removing the dead leaves from the iris and saving seeds from the heritage sweetpeas before piling the wheelbarrow with the fading vines and logging the great large sunflower wheels to put against the fence for the small birds to feed on. 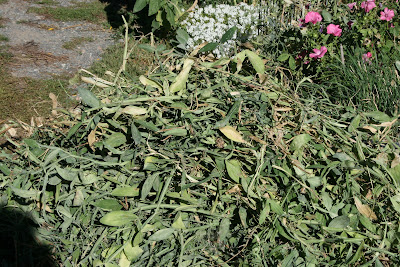 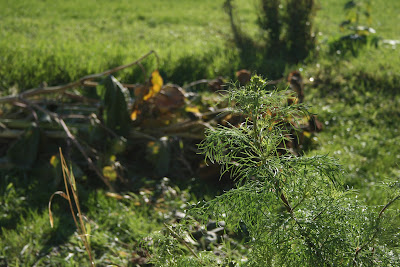 This great gift of time and perfect weather to do garden chores kept us from late afternoon drives to capture the magical things that were happening in the woods, along the roadside, in the orchards and vineyards, and along the creeks.
Finally, on Tuesday, after a short siesta we packed up the camera and started off! 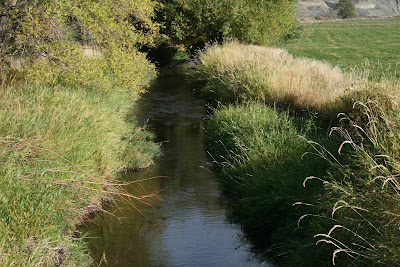 We turn down Beck Road (which always makes me want to call this creek a beck) and  stop on the small bridge, looking to the west and the east down the grass lined banks
and the overhanging trees. 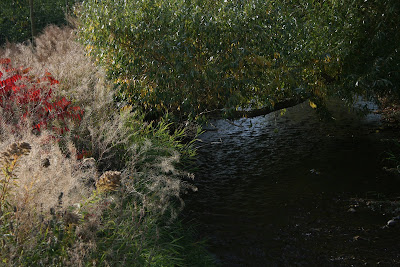 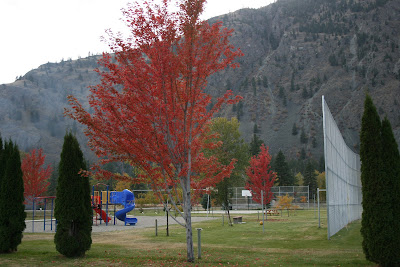 We lingered for a while at Koboa Park, first established as a Centennial Project in the '50's
and now restored and expanded into a wonderful playground, ball park and picnic site,
outlined round the edges with memorial trees, some planted in memory of pioneer families and
some in memory of those who built on a dream.
It warms Charles' heart that the young people of the community have worked so hard
at maintaining this lovely riverside park and we remember the early days and the
fellowship and hard work that went into those first efforts. 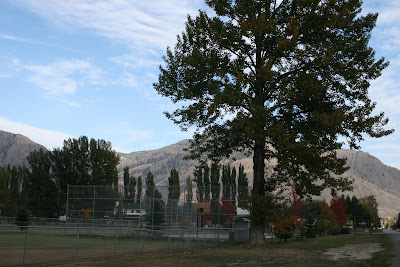 We turn along the road to Ginty's Pond where we find that while we fiddled in the garden
"autumn burned brightly, a running flame through the mountains, a torch flung to the trees"
and we have missed much of the colour of the willows and the shrubs. 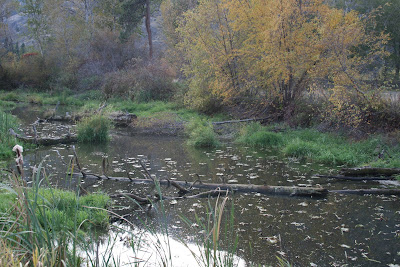 We search in vain for ducks or turtles. 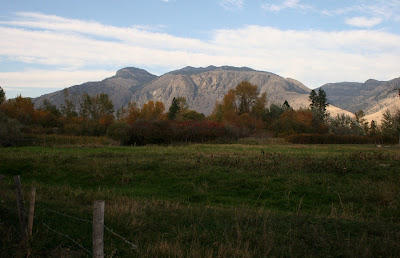 On the other side of the pond, across the meadow, the trees have assumed a more sombre
shade from that of early autumn and are in the shadow of the mountains
that rise above the river. 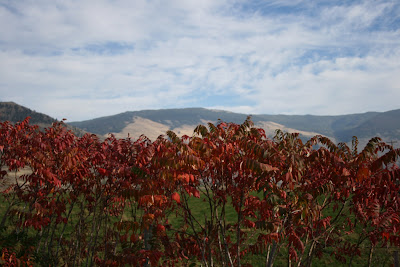 Sumac and dried grasses line the road as we drive to the other end of the Pond. 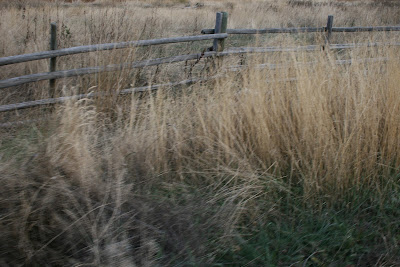 I watch for pheasants.  Charles sees a grouse, and we spot a magpie on the telephone line.
When we reach the main Pond we find it edged in slime, and are told by the lady
whose house is built just back from the bank that this is a result of
the contraption built by Public Works to prevent beavers from building dams,
which of course they are wont to do.
She didn't seem too interested in listening to Charles' theory about the dead water which
was causing the slime, even though he was at one time the manager of the
water district and has had much experience with beavers and the location in which they
have built dams in the past, down in the farthest reaches of the Pond. 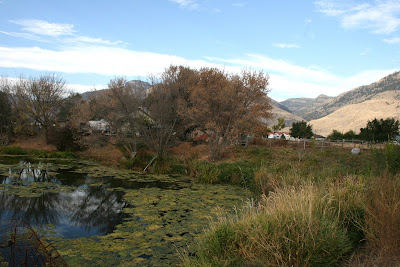 Naturally this problem piques Charles' interest and so we go across country to the road
that leads to the spot where beavers have been causing problems for lo these many years.
At least for the farmers and those who depend on the Pond for other reasons than making it their home. 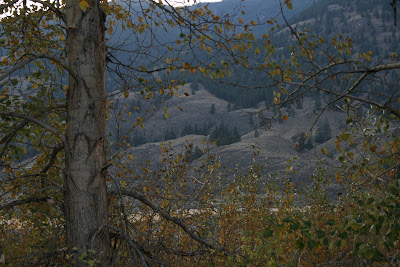 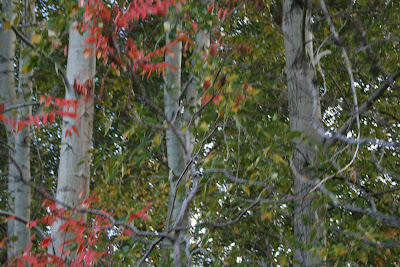 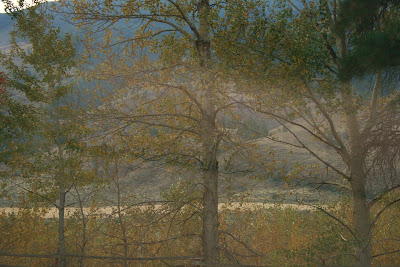 Along this bottom land a great many houses have sprung up.  Some of them belong
to farmers, but some of them are retirees seeking the stillness of the country.
We have been here long enough to know what devastation the river can cause
when it floods and Charles mutter dire predictions all along the way.
We come at length to beaver territory.... 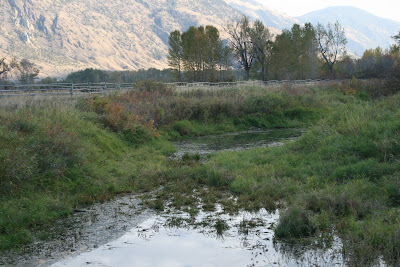 The shadows are lengthening, - the little dog will be awakening from his afternoon sleep,
and so we turn back to the old familiar road along the benchlands
and head for home. 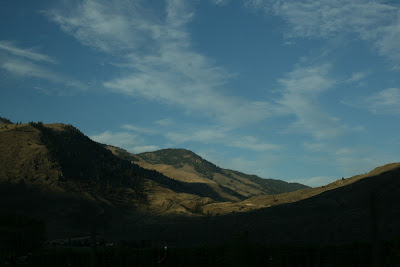 "Autumn wins you best by this, its mute
Appeal to sympathy for its decay "
Robert Browning
and on a more positive note...
"For man, autumn is a time of harvest, of gathering together..  For nature, it is a time of sowing, of scattering abroad."   Edwin Way Teale 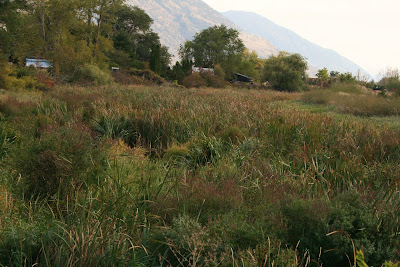 Even though we were late it was a lovely drive.
Posted by Hildred at 10:27 PM 3 comments:

The Notable letter this week is N

Frederick Ogden Nash, an American poet who delighted his readers with light, humorous verse, was born in August of 1902.  He died in 1971.

I discovered him early and some of his books have resided on my shelves since before we (Charles and I) were married, back in antiquity.

So That's Who I Remind Me Of


When I consider men of golden talents,
I'm delighted, in my introverted way,
To discover, as I'm drawing up the balance,
How much we have in common, I and they.


I'm afflicted with the vanity of Byron,
I've inherited the spitefulness of Pope;
Like Petrarch, I'm a sucher for a siren,
Like Milton, I've a tendency to mope.


My spelling is suggestive of a Chaucer;
Like Johnson, well, I do not wish to die
(I also drink my coffee from the saucer);
And if Goldsmith was a parrot, so am I.


Like Villon, I have debits by the carload,
Like Swinburne, I'm afraid I need a nurse;
By my dicing is Christopher out-Marlowed,
And I dream as much as Coleridge, only worse.


In comparison with men of golden talents,
I am all a man of talent ought to be;
I resemble every genius in his vice, however heinous -
Yet I write so much like me.

Though Ogden Nash wrote light humourous poetry the wit and cleverness of his poems earned him spots in American Anthologies of Great Poets.

For more N's do nod over to ABC Wednesday, here.http://abcwednesdayround3.blogspot.com/
Posted by Hildred at 7:11 PM 14 comments:

Romance and Magic in the Similkameen 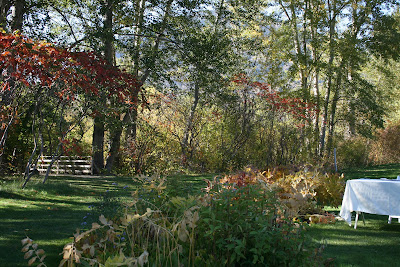 The stars were faint at five a.m. and at six
a light skiff of clouds hid any chance of a pretty sunrise.
But by eight the sky was clear and blue
not a cloud to be seen
not a breath of wind in the still October morning
A Perfect Wedding Day
Time stopped and gathered all the jewels of October around it
so that when it was time for the vows to be made
there was magic in the stillness as the Piper played
and the Bride and her father came down the hill and across
the green where the Groom waited. 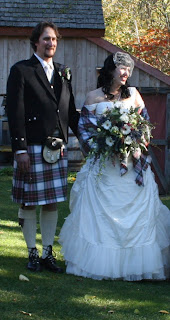 A sweet and solemn ceremony
and then the chance for pictures. 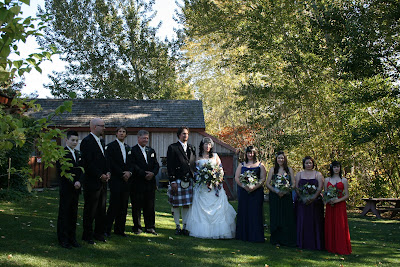 In the evening a wonderful reception
dining and dancing, wine and sweet words. 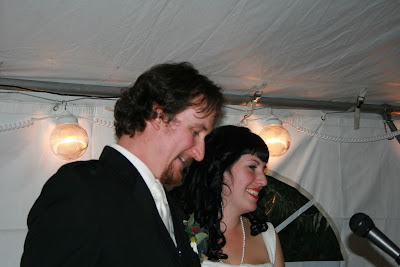 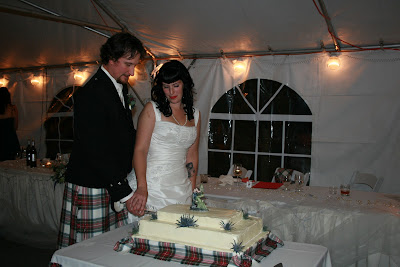 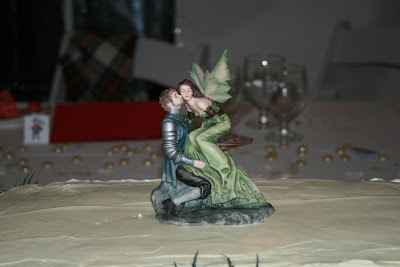 Beautiful wedding and the promise of a wonderful marriage............

Heart of my Heart


Heart of my heart, we are one with the wind,
One with the clouds that are whirled o'er the lea,
One in many, O broken and blind,
One as the waves are at one with the sea!
Ay! When life seems scattered apart,
Darkness, ends as a tale that is told,
One, we are one, O heart of my heart,
One, still one, while the world grows old.
Alfred Noyes
Posted by Hildred at 4:15 PM 2 comments: