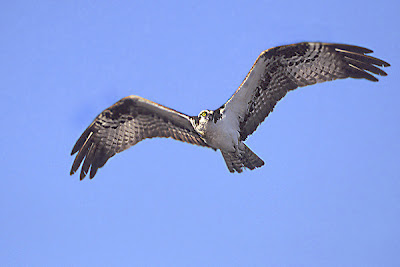 A drama unfolding before my eyes in the sky above the pasture, and the camera in the house (sigh). I knew I'd never make a good Boy Scout. No way I can constantly honour the motto "Always be Prepared"!

I have gone out in the heat of the day to get some wonderful new potatoes out of the bin that passes for our potato patch. I notice that the plants look wilted, and go to get a small sprinkler to revive them. I hear the sound of a bird in the sky, look up, and there is a beautiful Osprey, swooping ever lower over the pasture.

It is being chased by two smaller Hawks who circle and dive, circle and dive. The Osprey does a graceful roll in midst air, his claws protecting his chest from the fierce hawks that are determined to exile him from their skies.

Is it his mere presence, or is he up to some kind of mischief that causes such consternation on the part of the Hawks?

They don't linger, - the 'dog-fight show is brief, but exciting. The Osprey gradually circles away and one of the Hawks breaks off and leaves the fray, while the other accompanies the Osprey on his way, probably muttering dire imprecations, but I am too far away to hear.

I gaze down the valley until they are out of sight, turn to go in, and suddenly feel the wings of a hummingbird whizz by my head. There are two. Very tiny - probably this year's young. Joyful at the newly filled feeders and the Bee Balm. 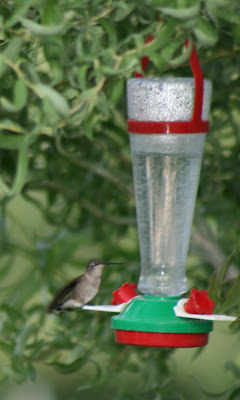 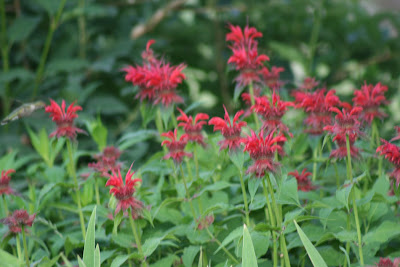 No. 2 Son gave me instructions on how to capture these whirring wonders on film, but first you have to have the camera close at hand........
Posted by Hildred at 8:36 PM

Enjoyed the pictures and the narration.

Good luck on capturing a pic of the Hummers - I have never had luck! Your Osprey photo is wonderful, though.

Oh Barb, I knew after I had posted that I should have credited the internet with the osprey photo, - I COULD have got a picture like that if I had had the camera close by, - nonetheless, have one in my mind.

Sometime soon I will ask if I can post the picture of hummingbirds that my son and daughter-in-law sent us from Meadow Ranch, west of Williams Lake. Watch for it. About twenty around the feeder, and they say it is that way all day long.