Z is for Zephyrus 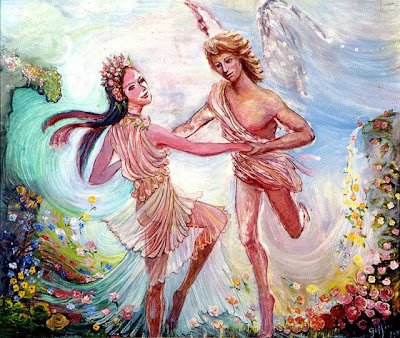 Here is Zephyrus, the Greek God of the West wind, - the most gentle of all winds, protective of the flowers of spring, and rather a naughty and sexy boy to boot! He is the son of Eos and Astraeus, the brother of Boreas, Eurus and Notus, and one of the Anemoi - the Gods of the Winds.

Amongst his many conquests was the goddess Chloris (reputedly his sister) to whom he gave dominion over the flowers and plants of spring.

Is it the sound of his name, the sweetness of the west wind, or his rather appealing racy character that have inspired so many namesakes. Zephyr motorcycles, cars, restaurants, resorts, musical groups, orchids, and prettiest of all, the Zephyrus butterfly.

Zephyrus is not so gentle when he comes to the Netherlands though: we mostly have west winds and that usually means rain as well! We prefer his opposite, bringing warmth during the summer and cold during the winter.
Great find though!

Nice little bit of mythology there! I enjoyed learning about the gods and godesses at school, as well as the less nice Greek figures of myth.

Hildred, For a moment I thought this was an old pic of you and Charles, dancing at a garden party. Perhaps it could have been...