In anticipation of the SuperMoon
The full moon rises behind Statue of Liberty replica atop a hotel in Kosovo's capital Pristina on Saturday, May 5th 2012  (AP photo Visae Kryeziu) 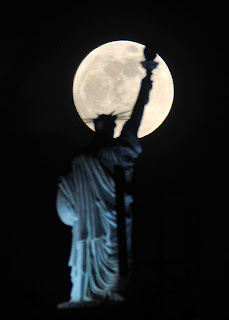 Here the sun still lingers close to the horizon and it will be an hour before the moon
rises into a clear blue sky.


I think I will not frustrate myself with trying to take a picture without a tripod, but instead will just enjoy the beauty of the night sky, and the fullness of the porcelain moon and Walter de la Mare's
poem about its silvery qualities that I remember so well from my childhood.

Slowly, silently now the moon
Walks the night in her silver shoon;
This way and that she peers and sees
Silver fruit upon silver trees;
One by one the casements catch
Her beams beneath the silvery thatch;
Couched in his kennel like a log
With paws of silver sleeps the dog;
From their shadowy coat the white breasts peep
Of doves in a silver-feathered sleep
A harvest mouse goes scampering by
With silver claws and silver eye;
And moveless fish in the water gleam
By silver reeds in a silver stream.

It has been a long and emotional day.  I was up picking scarlet and yellow tulips
for the church, just after six this morning, before they had opened their glorious petals. 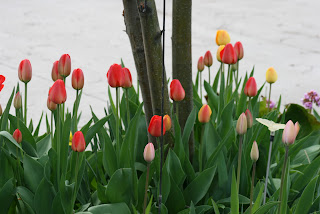 At the funeral we sang the hymn 'Those Hearts that we have Treasured".  The tune is rather prosaic, but the words are beautiful and mindful of  abiding love.

Our older daughter brought us some deliciously scented lilacs.
After I had put them into water and placed the vase on the table
Callie, the cat, climbed up to sniff that wonderful odour.....

Our younger daughter came around with some tender pork cutlets
to use in a stir-fry, but Callie wasn't interested in them!
We will have them for supper tomorrow night.

But now, tonight I think I will go to bed  and when the moon finishes its journey
across the sky it will be shining into our bedroom window from the west
and we will have a silvery sleep-in.
Posted by Hildred at 10:15 PM

As always, your post brings joy along with the sorrows that are part of life. The moon made it as bright as day in our bedroom at 4 a.m. this morning! (I looked and loved it and went back to sleep.) I too find photographing it too frustrating -- rather just gaze!

Another wonderful poem, Hildred. Thank you! As I read it, I remembered that "silver" is a word without a rhyme. But it is a beautiful word describing a beautiful color and a beautiful metal.

I am glad, in a sorrowful way, (is that possible?) for the passing of your friend. When the time is right, death is not a bad thing. But it does upset the living for a while.

Blessings to you, Charles, and Callie! Enjoy your pork cutlets!

Did you know that you can create short links with Shortest and earn cash from every click on your short urls.