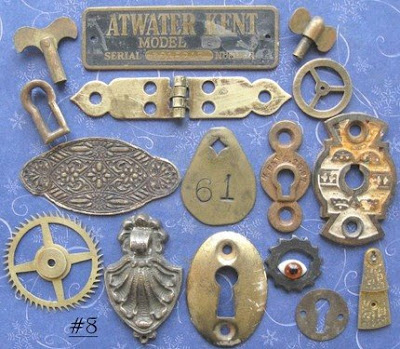 I was late taking coffee out to the man in his workshop. Breakfast was late because we'd had such a nice sleep-in.

When I slipped out the door with the coffee tray (guiltily eluding Caspar who has a little inner clock that tells him when it's time for walks and biccies)I found a large coffee tin on the workbench,(one of many that grace the garage) - the repository for numerous small treasures which were now laid out in rows, neatly wrapped in plastic bags. A lifetime of precious findings, although they may have merely carried visions of a practical future when first they were gathered.

I understand this quite well, being something of a hoarder myself, - is there anybody who grew up in hard times who has never said "I might need it some day" as they wrapped some precious object and put it away in a large coffee can, or a drawer or a trunk, along with all the other treasures.

And they were lovely, these small brass hinges and drawer pulls and the tiny coaster balls that were most practical when you needed to make something movable. There was no expendable plastic amongst them. They were all heavy and durable and spoke clearly of days gone by, when even small hardware was made to last and be elegant.

We discussed possible ways of using the drawer pulls, - or the double hinges that would go on a swinging door, if we had room for such a convenience. I came away empty handed, but I know that each and every one of those small plastic bags went back into that large coffee can, just in case they should be needed for another day.

I ponder - is it nature, or nurture? Is it hard times and a scarcity of the means to replace things that causes us to save and make do, and use our inventiveness to make those funny redneck things instead of going out and buying new? Never mind that they work, - they always draw smirks from those not afflicted....

If it's a gene I can see that there is a possibility of these coffee cans being around until at least the end of the century. We have six children, some of whom I suspect are incapable of throwing things away. You know who you are!
Posted by Hildred at 10:01 PM

Here is an idea - get some shadow box frames - and some velvet that you can wrap around the backing in the frame - then use silicone and mount these treasures in a pleasing manner and hang them on the wall. Making three of them would be perfect and would let you enjoy them while they are held safe and sound.

Here are a couple of links I found that sort of shows you what I mean.

If you make them all the same type of frames they can be hung as a group - it would be lovely to have a mat in the frame as well.

Thank you - what a great idea! I will have to make six so eventually there will be one for each of the 'children'.....however, the supply is endless!

Came across your letter in "The Hills" - hurrah for you...

I'm off to look at the links you sent.

"Came across your letter in "The Hills" - hurrah for you..."

I just happened to be trolling the blogs and came across this one which given the plethora of treasures you have could be right up your alley.

I myself would not do the "ribbon" hanger, but it at least gives you some more ideas.