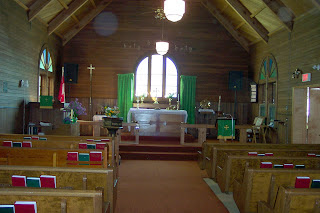 While sitting in church yesterday, I was listening with one ear to Bud, (the member of the congregation who was conducting the service, and preaching a very good sermon) - nevertheless, only one ear was listening, and the other was hearing voices from the past.

Beside me, on the window frame, was a small brass plaque in memory of Ada Kirby, an early pioneer in this valley.

The organ I play in church was donated by her grandson, in memory of his mother and father, - the first couple to be married in St. John's.

When you have attended the same church for 56 years the memories abound - you feel the presence of the people who occupied the same pew year after year, recalling their faithfulness, their humanity, sometimes their laugh or the seriousness with which they worshiped.

The names come flooding back, and I think what a glorious host they would be if they were all there, sitting in their accustomed spots. attending to their accustomed duties with the reverence that was so prevalent in days gone by. I remember the graciousness of the gentle man who even when he was in the early stages of Altzheimers took up the collection facing the altar as he stepped backwards down the aisle from pew to pew. And the kneelers who provided an opportunity for the talented sewers to provide cushions for reverent knees. Why is it that prayers said on one's knees are so much more meaningful than those murmured whilst in the Anglican Crouch.

I remember all the children who were a part of the church when we were young and not long married, - the wonderful energy that was imparted by young parents. Some of those same children still live in the valley, but they have abandoned the church, even though they remember with great fondness the marvelous Christmas pageants, - what it meant for them to play Gabriel, or Joseph, or Mary - or to be one of the Kings. And they still refer to the church as "our" church. Well, it is one of the mysteries of life, where society has led them, or where the church has failed to fulfill them.

Those Christmas pageants, - what a grand performance they were. The wonderful costumes, that mothers sewed, - the music that the choir had such fun rehearsing and the heart touching rendition of O Holy Night by Auntie Joan, the memory of which still brings tears to some of our children's eyes.- the great host of winged and haloed angels, - at least a dozen sweet cherubs, led by Gabriel who appeared from behind the pulpit with his Greetings of Great Joy! The Kings with their crowns and carefully constructed chests of Gold and Frankincense and Myrrh, - and they all had Pages. And the shepherds, who came to worship and adore with their crooks and their burnooses. It was considered an honour to be chosen, most especially as Mary, but Joseph had a pretty high rating as well. And Gabriel - I hear elderly mothers talking about when their son was chosen to Gabriel. Me among them. Even the STAR had a heavenly place, crouched behind the altar until his cue came loud and clear, - "and lo, the star which they saw in the East went before them"

Husband made the manger for the Baby Jesus, and the present Sunday School Pageant is now using his second creation of a place to lay the Baby's head.

Alas, where once the Sunday School Room was crowded with Pageant Participants, these days it is a slim cast, indeed. Where there was always room for one more angel, now it is a triumph to have even a v 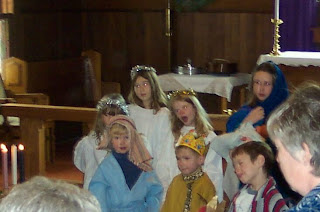 ery small band of the heavenly creatures. Last year we combined with the Roman Catholic Church across the street to attain a respectable number of shepherds and angels.

Sometimes we even have modern versions of the Christmas story, and that is O.K. too, except that the young parents who threw their hearts and souls into the 1950's productions are now the elderly people who remember with such nostalgia the wonders of the Christmas Pageants of old.

Well, I have to make this observation as well. The congregation was more dedicated, but so were the Clergy. In those times Ministry was a calling, which one fulfilled, rather than a career, which one pursues. I think it was the last gasp of Christendom as we knew it, and whither goes the life of the spirit now, who's to say - or to judge!

Bud finished his sermon, and it was time to recite the Creed and play the Offertory hymn, so my companions of the past slipped silently away into the shadows, but I remember them with love and affection and admiration, - even the curmudgeon's amongst them.
Posted by Hildred at 7:57 PM

Oh, Hildred, your writing gets more beautiful by the day. As I sat in the pew with you, I too, saw what you saw. Only my vision was of the little home town church of my own youth. The crowded Sunday School room with so many angels scratching at the irritating tinsel edging our wings and creating halos above our curled hair. The Sunday School Superintendent had a glare that could scare a child on Christmas Eve.