I spent the majority of the afternoon with one of the boxes of old photos (which I do treasure) on the table beside me, sorting through these precious snaps and making sure that the people in them were identified, and perhaps adding a small note as to time and place and memories.
For some reason I found as the afternoon passed I was getting more and more depressed, and this was a puzzle, as most of these photos are of places or people that I have been fond of, and one would think they would bring back affectionate memories. Well, they did that. At least some of them, - even the graveyard pictures. They reminded me that I have work to do on genealogy and as one ages you just simply have to face the fact that time is limited, and you can't put off these things forever!!!!
I rescued many of these pictures of the older generation from a cousin who was on the verge of throwing them away!!!  How could he!!!
Perhaps that was what was causing my blue mood? The realization that the photos depicted the past, and as wonderful as the memories were, in many cases the chance of making more memories with these same dear ones was long past.... I have a little file of photos of grave sites of grandparents and great uncles and aunts and cousins, and even parents. They are precious to me, but a lingering reminder of time and its habit of "passing" - never to be retrieved. It leaves in its wake these dear nostalgic memories.
There is a picture of my great grandparents "gingerbread" house, and a whole raft of relatives on the porch, in the picture below, - my father, his sister, for whom I am named, my grandparents, and my uncle Bob, leaning nonchalantly against a post, and a couple of aunts who were swept away when both were just newly married, by the pandemic of 1918/19. 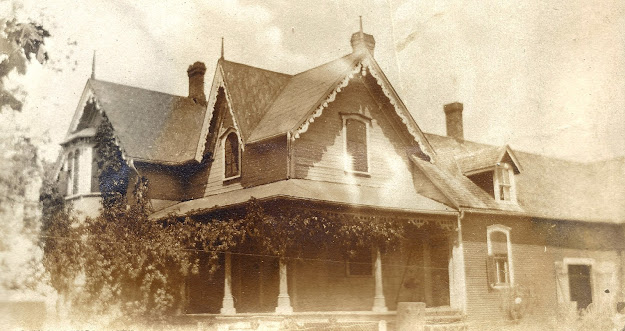 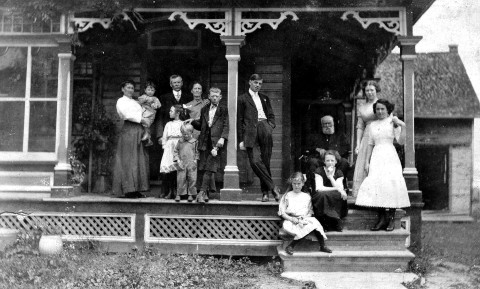 And the young girl sitting on the steps, who is the image of my own granddaughter.
I muse over a picture of one of my grandmothers, standing close with her own mother, - and a dear, sweet photo of another grandmother at the age of probably two, seated on her mother's knee and looking so much like my sister. 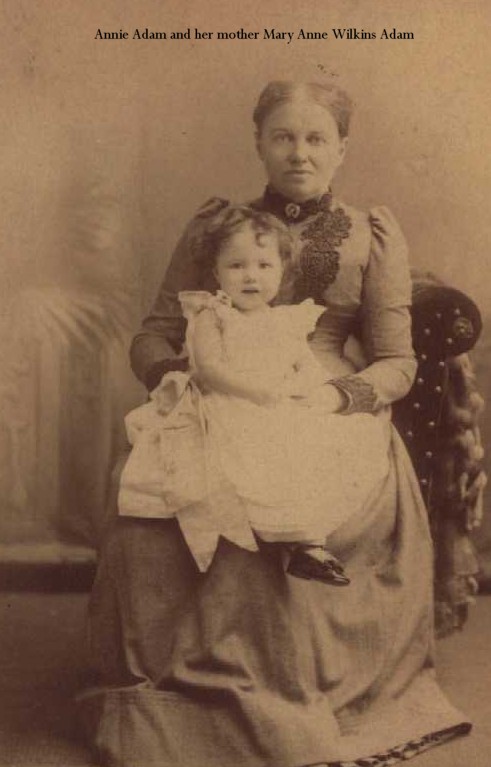 Oh time and genes,- how they accompany us into the future and the inevitable end, when only memories remain ...maybe THAT accounts for my nostalgia, which was a little bit morbid as well as grateful for the past. On the other hand, that time and those genes and that future bring the joy we all enjoy in the present, - despite that darned pandemics!!
Posted by Hildred at 10:30 PM

Lovely photographs Hildred and yes, I do know exactly what you mean about that feeling one gets when sorting through old photographs. I really don't think one gets that feeling of time passing until it has passed and the years have crept on. I keep meaning to say how beautiful that herbaceous border in your header is.

These old photos are wonderful and you have inspired me to work on the genealogy of my family. My children are grown but they may want to know more about their ancestors some day so I better get all of the info down for them. That is a good project to begin now. I also have photos to go work on. Thanks for this post!

Pat - I loved that garden too, - it was when we lived in town, on the outskirts of the village. Charles built the fence and we both gardened ferociously!!!

I have some very old photos similar to yours. I hope someone will take them when I'm gone and appreciate the history they show. Certainly none of my grandchildren seem interested in the "olden times" at this point.