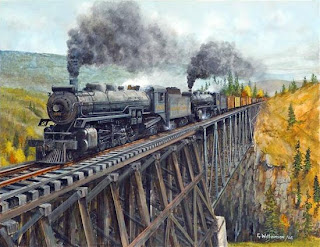 
Sometimes called Mculloch's Wonder after Andrew McCulloch who in 1910
began construction of the Kettle Valley Railway that would
connect the Kootenays to the B.C. Coast.

When silver was discovered in the Kootenay Valley of British Columbia the Canadian government were dismayed that because of a lack of access they were losing silver ore to Americans, who had easier access from the south.  Ever one to meet a challenge the Government commissioned the building
of a new railway, and Andrew McCulloch was appointed as Civil Engineer in charge of this project.
The building of the railway was completed in 1916, after four years of
extraordinary engineering involved in its construction. 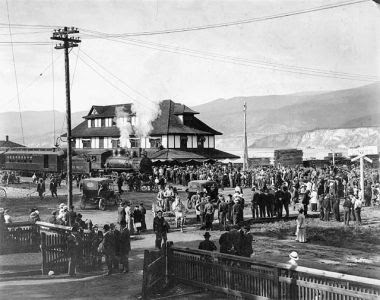 .
A picture of the Penticton Railway Station at the time of the first
passenger train to use the line in 1915.

Until 1949 when the Hope-Princeton Highway was opened there was a daily passenger and freight service from Vancouver to Nelson.

The Coquihalla section of track was closed in 1962 because of desperate winter
conditions and the expensive involved in keeping it open.  In 1946 my mother-in-law and I were stranded when the train could not make it through the Coquihalla, and
we had with us our oldest son, who was only a baby and who
we were taking to St. Paul's Hospital in Vancouver.  A frightening time.

The Myra Canyon is one of the most scenic sections of the Kettle Valley Railway, - there are 16 wood trestles, 2 steel bridges and 2 tunnels. 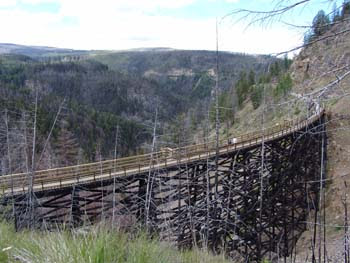 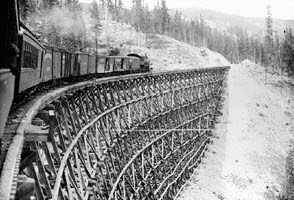 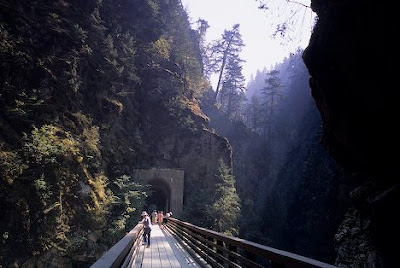 Some hikers emerging from the Othello Tunnel just above Hope in the Coquihalla Canyon Provincial Park..  High Canyon walls tower above and the river below thunders as it cuts
its way through the wilderness.
The tunnels are dark and damp and carrying a flashlight is advised while exploring the
tunnels, especially if one has children and the are afraid of the dark.

The only section of track where one may travel by rail is found at the Prairie Valley Station
in Summerland, British Columbia
A 1912 locomotive called the 3716 or a 1924 Shay powers the train with two passenger coaches and three open-air cars.

It is a marvelous tourist attraction and I have written in an earlier post about the
scheduled train robberies that are part of the summer adventure. 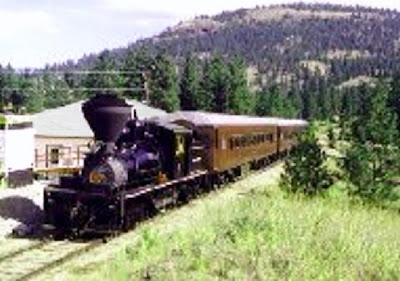 For more interpretations of the letter K go here
to ABC Wednesday with thanks to Mrs. Nesbitt and her Associates.