A pretty cloud formation over the Similkameen.... 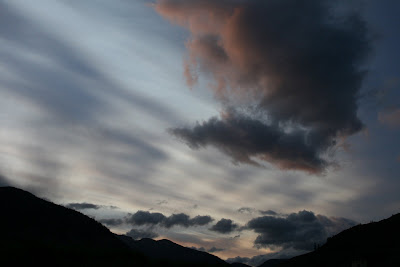 and the shadows that are cast upon the hills.... 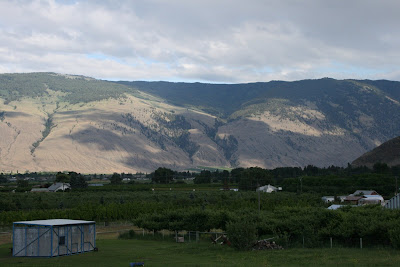 Click on Sky Watch Friday on the sidebar to see the sky in all parts of the world.
Posted by Hildred at 8:12 PM 6 comments:

And the flags flew in great profusion....

In a recent survey the biggest sources of national pride in Canada were the Canadian Flag, at 86%, followed by the Canadian Armed Forces, at 84%. 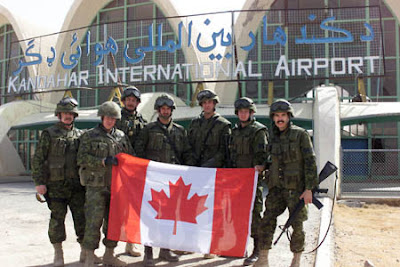 As I write this Charles calls to me to come and see a segment of the program "King and Country" which describes a tank action near Falaise where his brother Tom was killed in the tank he commanded. I watch as they show pictures of the military cemetery at Brettville sur Laize where we visited his grave.

In another survey I read today that the people of Canada value 'Freedom" above all else, and I pause to acknowledge the cost which has been paid by the brave throughout all these 142 years.

On a lighter note, let me tell you of the beginnings of Canada Day celebrations! 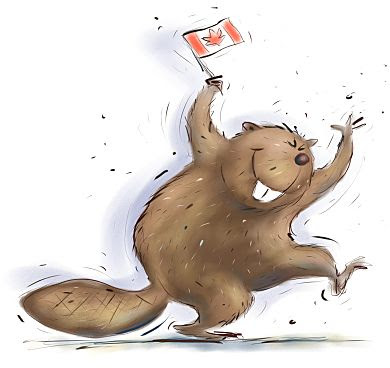 Samuel Hume tells this story in today's edition of the Vancouver Sun.

The first celebration of Canada Day began in a camp at Barkerville in 1868. The country was seething with gold seekers, many of them who had come through the mining camps of California - Americans with a deep antipathy to all things British.

'Yet many of the men working prospects in the Cariboo were British, with a heavy contingent of Welsh and Cornish miners who had brought the technology that permitted mining the deep deposits in old river bed'. And many others were loyalists from Upper Canada who had fled the American Revolution....

So in 1868, when rumours that a stirring Fourth of July party was to be held by the Americans on Independence Day, the British and Canadians plotted to pre-empt the party.

At one minute past midnight on July 1st, 1868, there was the deafening sound of a 21 gun salute to the birth of Canada, improvised by detonating charges of black powder sandwiched between anvils.

This was followed by a great party, - "horse races, athletic events and a greasy pole climb took place.....in the evening the Theatre Royal gave a special performance, followed by a grand ball at Mrs. Tracey's boarding house. The Grand finale was a fireworks display at 11.30 p.m. which was attended by over a thousand townspeople'. The first Canada Day celebration 'passed into memory, not without a few large heads - no doubt a result of the anvil chorus."

The Americans conceded it had been a 'rip-snorter' but sniffed, and noted the Canadians had no flag. And so they ran the Stars and Stripes up a tall flagpole.

However, on July 1st of 1869 the Canadians commissioned a local artist to make a Canadian flag, on which was a beaver, surrounded by a wreath of maple leaves on a white ground in the middle of the British ensign, and they erected an even taller pole across the street from where Old Glory fluttered.

"To this day Barkerville marks July 1 just as that first Canada Day was celebrated 141 years ago." 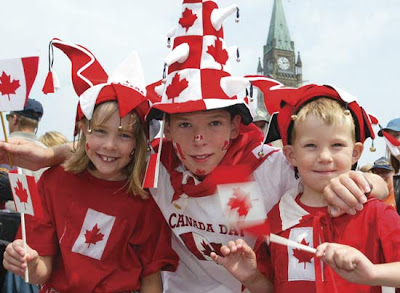 X is for eXpress to Summerland

where the doctor performs his Eye Magic eXquisitely

We were on the road early this morning, on the eXpress route to Summerland. Charles was to have eye surgery, and although patients are forbidden to drive to the site, he does not give up the wheel easily.

It left me with hands and eye for the camera, and I was able to capture a few pictures of the journey. 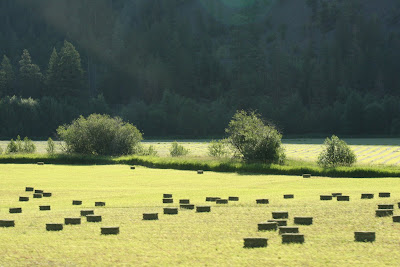 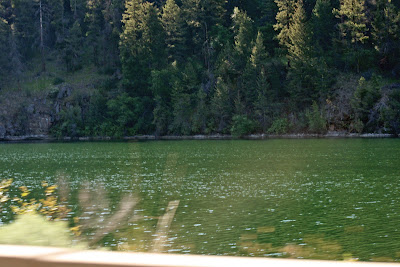 We passed along Skaha Lake and through the by-pass at Penticton... 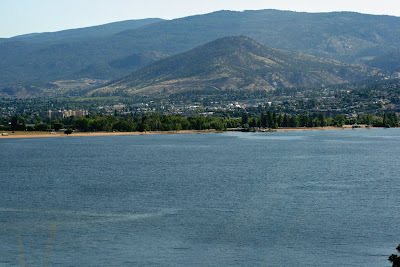 we came to the clay cliffs that line the roadside and tower above the lake, - quite eXtraordinary, and eXtremely impressive.... 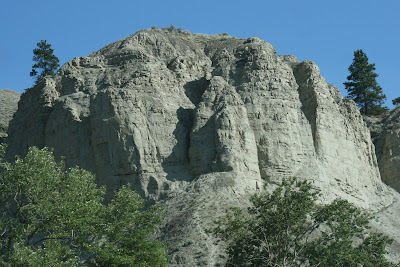 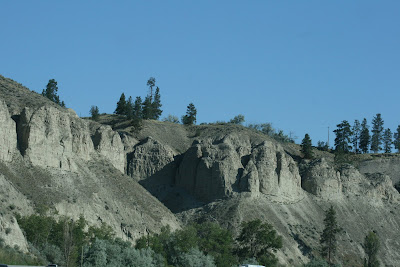 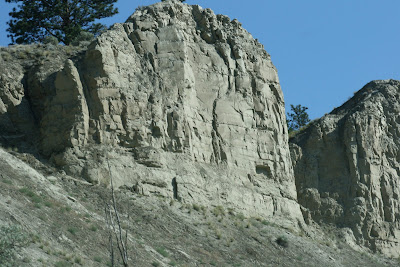 Just as we approached Summerland I caught a fleeting picture of Giant's Head Mountain....ever eXtra faithful in watching over the town. (you may have to look carefully for the Giant's Head, unless you click and enlarge) 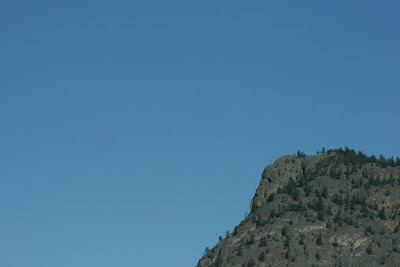 We stopped to get some eXcellent chocolate on the way home, as we both felt the need for eXtra sustenance. I was driving and Charles needed eXcess patience to keep him from eXclaiming aloud about my eXemplary conduct on the road!!!!
Posted by Hildred at 4:16 PM 13 comments: 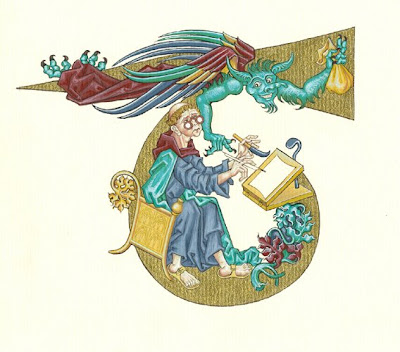 A few words about this most ancient of demons whose chief aim in life is to introduce errors into manuscripts, essays, letters, billets doux, and any other writing which, despite being proof read, invariably ends up with hidden mistakes which immediately upon publication are illuminated in the most glaring and embarrassing fashion.

Thank heaven for Titivillus, upon whom we can heap all blame!!!

Titivillus evidently gained prominence in the Middle Ages when he discovered the monasteries and the scribes ripe for his devilish work. The Scriptorium was a most important part of the monastery, heavily fortified against thievery. The time and labour involved in producing a hand written book, beautifully embellished, made them invaluable. Just the thing to catch Titivillus's evil eye...

"Monks who toiled in the scriptorium were called scribes. Because of the danger of a disastrous fire, no candles or fires were permitted, so in winter they had to work as best they could in the cold and the dark........Writing required long periods of intense concentration, and the scribes would pray earnestly for the strength and fortitude to complete his holy task, and for the Recording Angel to give him due credit at the final Heavenly audit"

Of course Titivillus let no opportunity pass to thwart them. I have a number of times received through e-mail a story of a bright young monk who found an error in the most ancient of manuscripts - one in which an 'R' was left out of a word which should have been CELEBRATE.

This mischief in the monasteries was not Titivillus's only task. He is an elusive character and stories about him were current among the Egyptian monasteries of the Desert Fathers in the 4th Century AD. He was characterized as a recording demon, meticulously writing down all the sins he could find people committing, for delivery to Satan as ammunition on the Day of Reckoning.

Titivillus frequented high places in church and was sometimes depicted as a sack-filling demon, gathering together idle chatter and gossip as it floated up to him, or mumbled and garbled prayers said without proper reverence, - all of which he stuffed into a large sack.

In this day and age I can quite imagine Titivillus gathering out of space all the idle Internet gossip and chatter, and his value as a scapegoat is enormous: "the malevolent entity upon whose head we can heap all the errors and typos and omissions and inaccuracies that we find daily on the internet".

This posting arose from my recent encounter with Titivillus who caused this mornings Church Bulletin to be dated May 24th, and furthermore inserted the wrong Gospel reading. I airily blamed the Little Demon, and he arose to the heights of the church, sulking. It would be interesting to know what whispered gossip and asides he found up there to stuff into his Sack.....

I am sure you will find some evidence of his presence within this posting, even with the spell checkre!
Posted by Hildred at 8:37 PM 2 comments: