Starting with the Doggerel I go to visit with my old friend, Ogden Nash, who has huddled on my book shelves for nigh  on to seventy years, entertaining me on many occasions with his humorous verse, - his elegant doggerel.  (Doggerel - light verse, usually of irregular metre, often dealing with nonsensical subjects, and looked down upon by many litur guru' ists  -  not connected with the church but a doggerel word for literary critics)

Here is an example from Nash's 'Good Intentions" which seems especially relevant on these gloomy sunless February days.


Here We Go Quietly Nuts in May

Do you hanker for April showers,


Or a rarefied day in June?
Give me a grade-A May day,
And please deliver it soon.
I am weary of branches naked,
Creaking like lovelorn cats;
The earth underfoot half baked
And the sun overhead ersatz.
Send me a balmy zephyr
To play me a rigadoon,
And I'll gulp of my grade-A May day
Till my hiccups hammer the moon.

And another little brief verse about the Porpoise

As to Dingbats, well, probably the most well-known is Edith,  in Archie Bunker, but Dingbats also refers to a type of font similar to Wingdings that provides the writer with all sorts of signs, symbols and graphics.

And to a 'Paul Sellars'  word game popular in the United Kingdom and in North America, where it is known as Whatzit.

Dingbats are 'cunningly disquised names, phrases and sayings that are turned around, upside-down, sideways or jumbled up.  You need to work out the hidden word or phrase on each card.  It could be the size, position or direction that will give you a clue.  Sometimes the pictures combined with a word or a number will give you your answer'  (thanks to Mr. Google)      .

For more Ds drop in at ABC Wednesday, here, - with many thanks to Roger, Denise and all Dependable helpers.

Well, at one time I could follow a game of football with some excitement,
but I seem to have lost my enthusiasm, and although the Super-Bowl is on the TV,
with all its amazing commercials, I am only getting glimpses of it as I pass through
on my usual happy hour/supper time routine,
and I am going to switch when the Great British Bakeoff comes on
as I find it much more fascinating than the Patriots and the SeaHawks
(though I would like to see the Seahawks win and I think their mascot was most impressive
as he led the team out onto the field!!!! 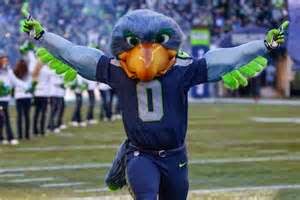 .  And when I went to consult Mr. Google about a photo of him I also discovered these facts......

Ryan Asdourian can walk down the halls of his office building
on Microsoft's Redmond campus and nary a head will turn.
Put him in his Sunday outfit, though, and heads pop out of offices,
smartphone cameras appear and one person after another stops to greet him -
especiall in these days of Seahawks playoff fever.
Such is the double life of Asdourian, 32, a Microsoft employee
who is also the man inside the costume of 'Blitz'  the Seattle
Seahawk Mascot.
Most days of the year, Asdourian, a ten year Microsoft veteran,
works on getting developers to create apps
for the Windows platform.

His weekday presentation patter goes silent
while his physical antics grow bolder and bigger.
"When I'm in the costume there is a character for Blitz...
you transform"  Blitz, he said, "is the Seahawks
biggest fan.  He pumps up the crowd, loves kids, loves to be goofy,
has a lot of fun.  You're excited
and you're representative of the team,
so you end up walking a little bit differently,
carrying that excitement with you."

I really had planned to watch the whole game, while I knitted another lace scarf, but I do miss Charles to comment and cheer with!
Not great sport fans, but we could get quite involved when the stakes were high....
I remember pacing up and down the garden, outside,
when the Penticton Vs were winning the World Title all those many years ago,
- it was just too fraught to listen to (radio - before TV)

It is later now.

And then I got lost in Downton Abbey
and watched Lord Crawley scuffle on the floor
with the thin art dealer who was prepared to take advantage
of Lady Cora.

An elegant evening soap opera, I think, although
it does have educational overtones.

I switched back to the football game and was just in time
to see the fantastic fumble recovery and
the heartbreaking end to the game.
At least to Seahawk fans and other westerners.

And so goes Sunday evening - I didn't get a lot of knitting done.
Lace patterns take a fair amount of concentration
and I found the needles stilled in my hands for
long stretches of time .

Did you remember to say White Rabbits this morning ?

I woke about two a.m. and took advantage of my
wakefulness to call upon the White Rabbit
for a pleasant, sunny February.

I woke at seven to find a light dusting of snow of the ground.

What does that say for the Wite Rabbit;  and
just how much faith should one put in his magic?

Or is it up to each of us to live day by day,
accepting what comes with good will  and gratefulness?????

Enough philosophizing - I think I will spend a bit of time
trying to master Candy Crush which
I have taken up instead of Luminosity.  Much more fun to see the candies
crushed, and just as much of a challenge to the brain.

P.S  I am not sure why Blogger has changed backgrounds in mid stream
but so be it.....
Posted by Hildred at 7:37 PM 3 comments: