We are more or less caught up with the spring garden work (well, I haven't finished my demolition project but that seems to be an on-going skirmish, with the Chinese Lantern Company (Inc) continually pushing their underground railway around in an intricate maze. I come across the long, straight pencil thin roots wherever I dig). ....

There is now a little time for books, and I have been re-reading Ex Libris by Anne Fadiman, a charming book (as they would say in reviews) about the precious place books have in the life of those who treasure them. This will be the third or fourth time of reading....

And as a coincidence I found in the library a book she has edited entitled "Rereadings". 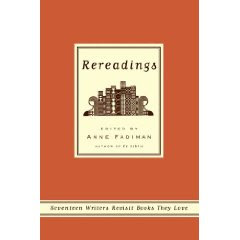 From a review by Farrar, Straus and Giroux...

'Is a book the same book—or a reader the same reader—the second time around? The seventeen authors in this witty and poignant collection of essays all agree on the answer: Never.

The editor of Rereadings is Anne Fadiman, and readers of her bestselling book Ex Libris will find this volume especially satisfying. Her chosen authors include Sven Birkerts, Allegra Goodman, Vivian Gornick, Patricia Hampl, Phillip Lopate, and Luc Sante; the objects of their literary affections range from Pride and Prejudice to Sue Barton, Student Nurse.

These essays are not conventional literary criticism; they are about relationships. Rereadings reveals at least as much about the reader as about the book: each is a miniature memoir that focuses on that most interesting of topics, the protean nature of love. And as every bibliophile knows, no love is more life-changing than the love of a book'.

In her Foreward: On Reading, Anne tells the tale of reading 'The Horse and His Boy' by C.S. Lewis to her son, Henry. It is a book she had read when she was eight, - the age of her son at the time of the rereading. His acceptance of the book was the same as her's had been at first reading, enthusiastic and totally absorbed in the adventure. 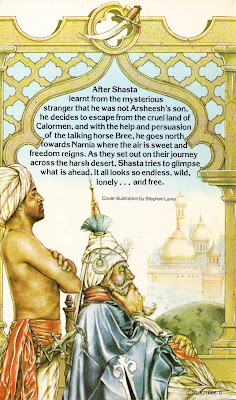 Anne was delighted at his reaction to the time they spent reading, but gradually her adult self remembered C.S. Lewis's attitude to women, and she was appalled to find it colouring her interpretation of the book which she had once found so enchanting.

Anne says - 'and there lay the essential differences between reading and rereading, acts that Henry and I were performing simultaneously. The former had more velocity: and latter had more depth. The former shut out the world in order to focus on the story; the latter dragged in the world in order to assess the story. The former was more fun; the latter was more cynical. But what was remarkable about the latter was that it contained the former; even while, as with the upper half of a set of bifocals, I saw the book through the complicating lens of adulthood, I also saw it through the memory of the first time I'd read it, when it had seemed as swift and pure as the Winding Arrow, the river that divides Calormen from Archenland'.

I closed the book and thought about this, - the way experience affects our relationship to books we first read while we were still young and innocent; when we didn't know what it is like to be twenty, or thirty-five, or sixty, or even eighty-four.

It was a tender, romanticized picture of marriage, and I sighed with anticipation. Sentiment kept the book on our shelves for many years, probably until we downsized just after our 60th year together. I did reread it a number of times, - it was still touching and romantic, but by this time I also knew the realities of a happy marriage.

A few years ago I found a sequel to Claudia and David in a second hand book store.
It will be interesting to reread it. I have never really abandoned romance, but then, the years have taught me to cultivate reality as well.

Will I have a different view of the 'young Claudia' from the one that filled my head with such quixotic fantasies?

Some evenings the sun slips over the horizon quietly, turns his attention to the Pacific and nothing more is heard from him.

Other evenings he sends an ever changing glorious light show that lingers on and on, until finally dusk steals the colour from the clouds, and the lights go on in town and home. 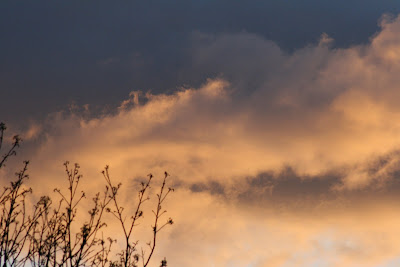 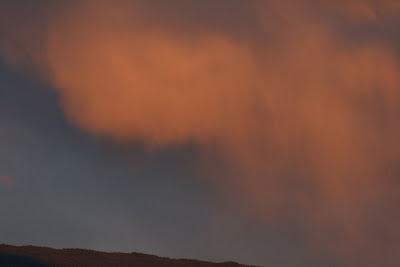 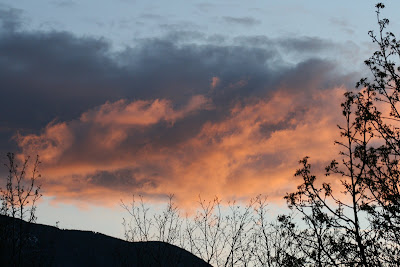 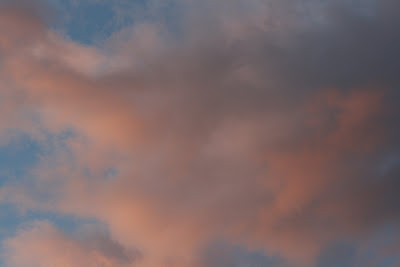 In the midst of all this splendour the moon appears, - pale, ethereal, a light to guide the way to darkness and hurry the sun on his way..... 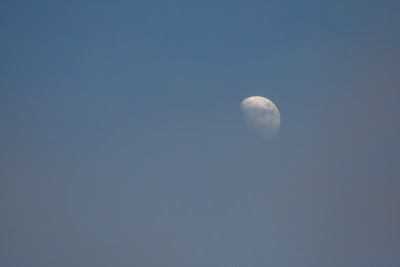 S is for Strolling

I have given up the brisk walk of my younger days, and now I STROLL.

I stroll with the dog, and as he is old too, and blind and deaf, he is a suitable companion for such lovely adventures Strolling down the lane.

I stroll at the store, leaning companionably on the grocery cart.

And I stroll around the garden, although a lot of my time there is spent bending over, creating order out of chaos.

Lately I have been Strolling through Cyber Space, stopping here and there to visit Blogs that awe me, entertain me, educate me, inspire me and some that leave me feeling down right inadequate, they are so beautifully constructed and so magnificently articulated.

The pathway leads me to such varied countrysides. A few nights ago I stopped in Fairyland and read the postings of a number of Bloggers who live in the Land of Children's Books and have adopted the Fairies, the Elves and the Trolls into their own particular Blogland. Wonderful pictures of ethereal maidens and handsome princes, - magical golden coaches and Little People who serve the ethereal maidens and the handsome princes. I was enchanted....

I am amused and bemused at some of the extraordinary witty blogs, as I Stroll from one brilliant posting to another. Clever, sharp and humorous, - I immediately bookmark them to retrace my steps and visit another day.

In my Stroll I find literary blogs, travelogues, the use of words and phrases that make me smile with pleasure, pictures of flowers and gardens and far off places, superb descriptions of nature that touch my heart and as a contrast, wonderfully practical and down to earth blogs, comforting in their simplicity and wisdom.

It is not too long ago that I gave up the brisk walk, and it still comes in handy in emergencies, but to Stroll is so relaxing, so conducive to seeing what magical things lie all around you. It is a precious part of growing old(er).....
Posted by Hildred at 9:10 PM 8 comments: 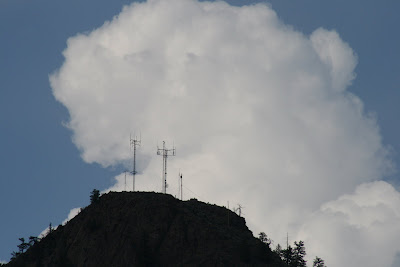 Do you remember lying on your back in the grass, smelling the fragrance of the earth and searching the clouds for elephants, or angels or any of the other wonderfully imaginative figures that the clouds are wont to form.

Yesterday was such a day, and if it wasn't so hard to get up I would surely have thrown myself down amongst the dandelions and searched the heavens.... 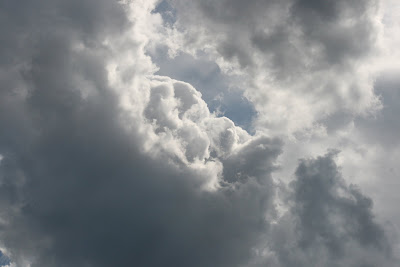 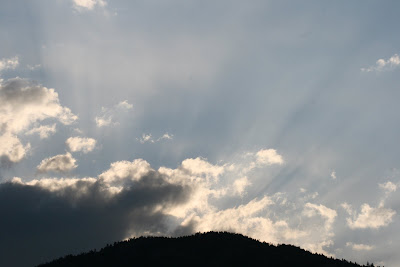 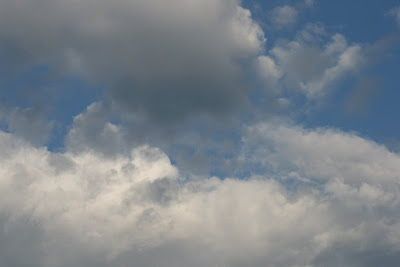 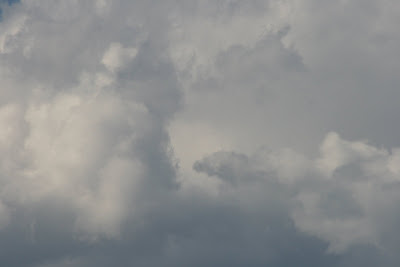 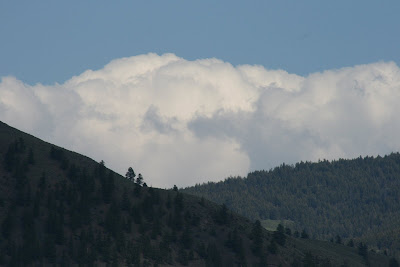 Pictures don't really do it, - you have to be there to watch the movement of the clouds as they form and reform all the while providing enchanting entertainment for those who are aware and search....and I think, if I remember correctly, you have to squint your eyes!
Posted by Hildred at 10:26 PM 2 comments:

I love it, - it just seems to carry you along on such a marvelous wave of music.

Gottschalk was an American composer who was born in New Orleans and became a dashing and romantic virtuoso on the piano as he played his own pieces in concert.

Despite his popularity, most especially in South America, he had a tragic career and died at the age of forty. Unfortunately he has never, since his death, received the recognition and acclaim that his music deserves (IMHO). Perhaps because he is much like Chopin, but does not quite make the mark!

Listen in, - it will gladden your heart and set your toes a-tapping.
Posted by Hildred at 10:01 PM 1 comment: