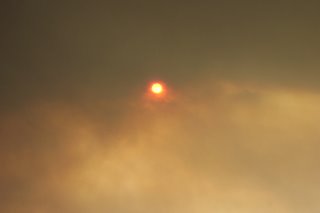 
This afternoon husband, dog and I went for a drive through the Lower Similkameen Valley (where we live) and here are some of the sights we saw. 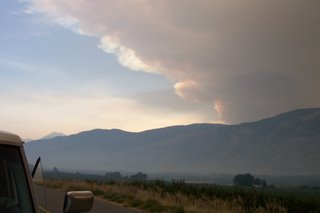 The smoke is from the Tripod Fire in the State of Washington, seeping up over the border through the Cawston Valley from the south, and from the Tatoosh Complex Fire on the U.S. side of the border in the Pasayten Wilderness inundating the valley from the West.

My husband tells stories about a previous fire in this same area which resulted in him working as a Licensed Log Scaler in the Pasayten country, on the Canadian side of the border. They were cutting burned timber which was left by this fire when it crossed the border into Canada. Because of the restriction which evidently bans the use of heavy machinery in fighting forest fires in wilderness areas in the U.S. this fire eventually had to be fought back with heavy duty machinery on the Canadian side, thus augmenting the Kentucky mule skinners, picks and shovels which were being used in the U.S. Pasayten wilderness to attempt to contain the fire.

I question the wisdom of preserving wilderness areas, only to have them destroyed by uninhibited fire. And I question further the damage to the health of many who are susceptible to smoke. How much second hand cigarette smoke would equal the smoke that is now inundating thousands of square miles because of what appears to be inadequate fire fighting techniques?

It gives me pause to consider the disadvantages of the National Park which is being proposed in the Similkameen Valley. The Kelowna fire of recent years ravaged a National Park left unkempt and neglected, flaunting too much of a temptation for natural causes. Whereas now it is once again in a state of re-birth it hardly compensates for the damage which was inflicted on neighbouring communities.

My husband and I discuss this situation, and consider the orderly logging in these hills sixty years ago, and the stewardship of the ranchers and farmers in the area.

We see that the trees in the logged areas are once again mature. My husband tells me of skid roads and trails which were disturbed by these logging operations, resulting in a soil ready to receive moisture and seeds, and to generate new forest trees. He tells me also of disturbing the soil in treeless areas on the open slopes of the Similkameen valley to a depth of two or three feet with a cat, and turning up charcoal from ancient fires. These are the areas which may take centuries to recover from fierce fires.

Well, those are the thoughts I had as we traveled through this smoky valley, and these are the comments which resulted from our conversation.... 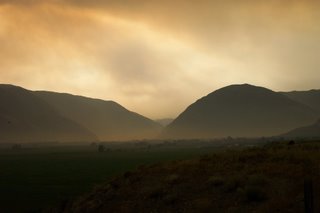