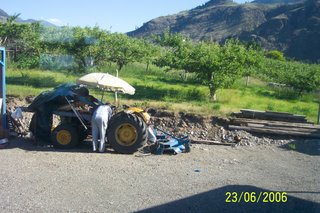 Underlying all the other things we are doing daybyday is the frantic search for the lost Manual for a Massey Ferguson Diesel Tractor.


Here is a picture of the Massey Ferguson Diesel Tractor along with its diligent Owner.

This was taken at a time when all necessary information for repair was stored in the Owner's diligent brain.

However, a situation has arisen where the Owner requires the manual to guide him in his delicate work with the wiring, - in short, he requires the schematic which is displayed in the Massey Ferguson Diesel Manual he has owned for forty years (both tractor and manual).

The Tractor sits in plain view in the back yard, displaying its innards. But the Manual has been displaced, shifted, hidden, become invisible, - in short, the Manual is lost. The Owner knows where it was in the old house (I know where things lived even in the house before that) but it has escaped and is hiding, somewhere on the new property.

When things get puzzling for me I often consult Google, and so I thought there might be some advice on finding things tucked away in a remote corner of the Web.

I found there were 52,000 results online when I googled the subject, - "searching for lost items"
This was a tad daunting, but some of the entries soon caught my interest. There are myriad methods of regaining lost objects.

I found that you can do this through Prayer Cards, - or you can do it mathematically. There is a more esoteric method - I ran across a thesis on finding lost objects which involved investigating the real world and the nature of what losing an object really means.

There are a number of patented devices or systems for locating lost objects, and one Web page which promised to reveal how people currently find lost things was clicked on, and the Page came up "NOT FOUND".

I found a method of locating lost items through a complicated astrological system, and one which recommended praying to St. Anthony.

I found a most interesting Spell which guaranteed success.

Cast your circle and invoke the Elemental Guardians. Light the black candle (for solving mysteries, and drawing away the negativeness of the loss), and then the orange candle (for luck and precious objects). Visualize the lost object(s) in the mirror as already being found. Place the magnet between the two candles and stroke it towards you as you say the following three times, substituting the name of the lost object for "(lost object)":

By the wavering flame of this black light,
Grant to me of my (lost object) a sight.
By the power of this orange flame,
Give me luck to find the same.
In this mirror the (lost object) I see
Make the magnet draw them to me.

I haven't tried this yet, but I was drawn to Professor Solomon's book on the Twelve Principles for finding lost objects. Even the Thirteenth Principle, which when all else fails recommends resignation, a shrug of the shoulders, and a resolve to Call off the Search. However, I doubt if the Owner would be happy with this solution.

Calling off the search and starting a new search for an old manual that some other Owner may have tucked away could be a way of solving the problem. Everyone knows that when you lose one glove and then replace the pair, the lost glove immediately turns up. There is even a Grook attesting to the truth of this theory....