The letter is D

D stands for Dawson Creek, - a town in northern B.C.

Dawson Creek started life as a small farming community in the dry and windy prairie land of the Peace River Country that spans British Columbia and Alberta,  close to the Alberta border.   In the beginning many of the inhabitants were European Canadian settlers moving west through the Peace country when the Canadian government began issuing homestead grants to settlers in 1912. 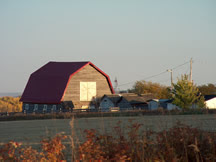 With the coming of the Northern Alberta Railway in 1931 and the construction of the grain elevator more settlers were attracted to the community.  Business grew and in 1936 Dawson Creek was incorporated as a village.

Some of its claim to fame, and certainly a reason for its sudden growth in 1942 was the Alaska Highway, built by the U.S. and Canadian governments in WW11 to transport equipment 1500 miles to the Yukon and Alaska.  Thousands of Army personnel, engineers and contractors poured into Dawson Creek.  It was completed in less than a year, with 150 bridges and 8,000 culverts.  Even after everybody packed up and went home the population and growth continued.... 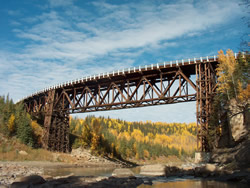 Dawson Creek is Mile 0 of this famous highway..... 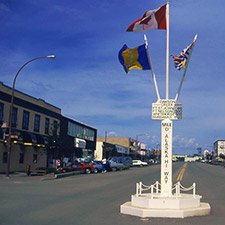 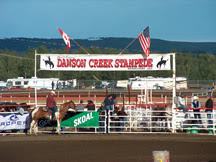 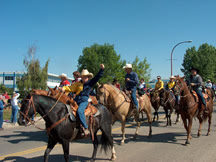 as well as Art Galleries, a Heritage Village. and I must say, a long but pleasant winter
with blue skies and sunshine...

For more Ds dally on over to ABC Wednesday here,
with thanks to Roger, Denise and all dashing helpers.
Posted by Hildred at 8:01 PM

A nice little geography lesson to start my day. It's a name I often noticed when I used to digest my atlas as a kind of hobby. I can still easily waste an hour looking at a map.

My first husband's father and family came from Calgary and I remember him
talking about the Rodeo, in which his Uncle and Grandad used participate.
He often visited Edmonton, which was where the Christianson Family was and
still is. He visited them along with one of our daughter's a few years before
he died.
I love to read about this part of the world, I feel an affiliation with Canada
as my three daughters have part of their family there.
When my daughter, who visited with her father, got married, some of the relatives came over to
her wedding... Great people.

Yup! These cowboys are made of good stock !

Hi Hildred! This looks like a pleasant country village with a lot of romantic stories!
Have a great week!
Wil, ABCW Team

What an amazing achievement the speed of construction of the Alaskan Highway was. I like maps of Canada, not only to appreciate its size but its mix of names, those that have been transplanted there combined with the descriptive and indigenous names.

so no relationship with that TV show I had never watched

These photographs show the Canada I love Hildred and made me so nostalgic to come back.

We loved learning about the highway on our Alaska/Canada trip last summer. And of course I have the iconic picture of our van by that flag circle (although we did it backwards, it was the last mile for us).

seems to be a loveky place