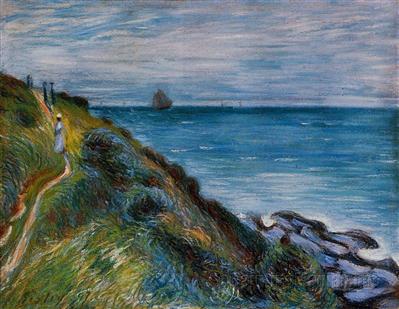 
"It is the only place where I have been able to wake up at exactly the end of the night, and it became a tradition with me to dress and go down through the quiet to the front, then up to the point, and out along the cliffs, wide-eyed and suddenly awake, watching the sky gently extracting itself from the dark arms of the sea.  Oystercatchers in their dinner jackets pipe the reveille, jackdaws chatter, boasting about their dreams, and out beyond the islands the gulf sky to the far southwest is a particular pale white-blue, the tone of pure air, washed, rinsed, and scoured by last night's squalls, catching the sun rays now, as the swells of cloud billow with light and the first warmth of the morning reaches for the cliff tops, where the thick and sudden turf rolls over, like God's green shoulder, down to the gasp and grasp of the sea."


The words of Horatio Clare in his wonderful new book, "Running for the Hills" and would they not inspire you to rise early and partake of the miracles of the dawn  - 'watching the sky gently extracting itself from the dark arms of the sea'  such tender imagery.... 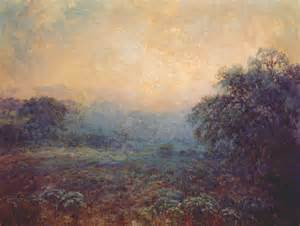 It has been a particularly satisfying day here in the Similkameen, - warm and breezy - perfect summer weather.

I awakened - not with the dawn, but soon after, and watched out the window as the light gradually glowed golden on the tops of the far hills.  And I remembered my bedtime determination to finish threading the loom, early in the morning, and rose with some anticipation.

I go in and sit at the loom and I am encouraged that I am more than half-way through the threading, - surely an hour should do it.  But I keep forgetting that even before half an hour has passed my left shoulder will be complaining bitterly .  So it has been a day of threading a bit, then stopping, gathering my book and the telephone and going to sit in the garden, while it is still fresh from the night air.

I have to confess to reading longer than I bend over the loom, threading....  I am so enchanted with the memoir, and with the beauty of the writing.  It brings back many memories of  lambing and shearing and nights spent in the barn with pregnant ewes, and when I look at Charles' shepherd's crook I am reminded of the lovely way the sheep responded to him any time he entered the barn.  A good and gentle sheep man! 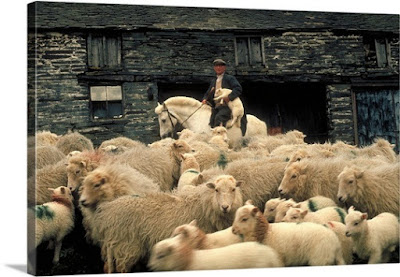 Pictures from the Internet

So I did finish the threading, and when I get to this stage of dressing the loom I can hardly stop until the threads are all sleyed through the reed, the warp tied on and I can begin to throw the first weft. But I know that I will be drawn even more to finish the book, and then go back and re-read the especially lyrical passages of Horatio Clare's memoirs of a childhood that was 'marked by wonder and joy' - the parts that mirror our own experiences, and that of our children.

Thank you so much for your wonderfully kind reading and writing! It's my proudest passage, and predates the book. Originally it was part of a love letter to Anne Garwood in San Francisco. Very best wishes to an ideal reader - Horatio

Isn't it marvellous when one comes across a book which enthralls and satisfies in equal measure? So glad you are enjoying it so much.

What a fine day and what a beautiful post. The passage you quote at the beginning is enough to make wish to read the book (although I certainly didn't have the privilege of growing up in that kind of country). I can well imagine how it speaks to you.... to be able to revel in the fine writing and also in the memories it evokes.