Friday, June 26th, 2020
Youngest son arrived early this morning with a virtual chauffeur's hat and a delightful invitation to go for a drive....which I so readily accepted!!!
Since reaching this venerable age, and since my driver's licence expired I am not so inclined to make these  drives down through the Valley, - the ones that Charles and I used to take on the spur of the moment, and found so enjoyable.
Without even checking my hair or my lipstick I was out through the door, down the steps and into the car, ready and raring to go!
This is a drive that we used to take fairly often, poking around in all the nooks and crannies of Cawston where we lived for so long, with apple trees and sheep and a wonderful family of children.
found that things have not changed drastically, - many things still the same to stir my memories of the thirty-six years we lived on the Cawston Bench with our children, Charles' father, and a flock of sheep.
Different occupants of the houses and orchards from those who planted the Benchland;  all veterans of the Second World War, as it was a "Soldier Settlement" project, as they called such entities after the First World War.
So probably the community is somewhat different, and perhaps the farmers are not all so young, and peers of the military, and there may not be so many children, but the orchards are all looking green and vital and cared for, and here and there are the remnants of some of the veteran families whose children have stayed with the farm.
All sorts of memories came flooding back, - the year we had all black lambs from the beautiful silver/black ram we had, and the field above the fruit orchard was ebony dotted with his offspring.  The children of various ages, all catching the school bus, and the involvement of the ladies of the Bench in the Parent and Teacher's Association - the festivities in the Cawston Hall, and the Father and Daughter dance that opened the evening - the wonderful feeling of comradeship among these young veterans and their families, -  stirring up Memories' Well can result in great nostalgia, and it is enough to say it was such a pleasure to be in this small community again.
And there were the other memories of the fields of tomatoes we planted for the cannery, while we waited for the orchards to produce fruit and provide us with a living.  I remember playing bridge with friends in their unfinished house (as most all Veteran's houses  were - unfinished -.as the money had all gone for trees and irrigation equipment and tractors) and one of the rooms was stacked with tomatoes for the market in Vancouver.  The smell of tomatoes in great quantities always reminds me of that bridge game. 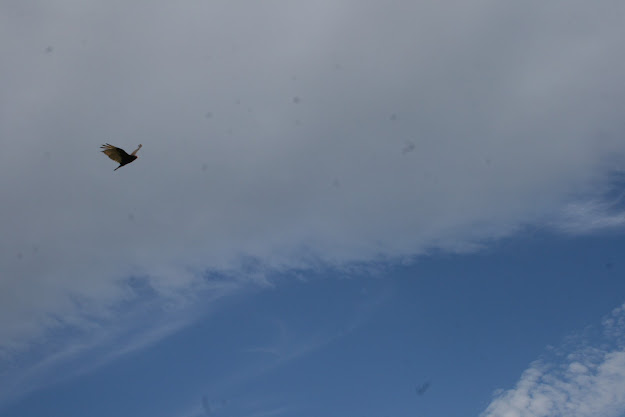 .We went a little way down the Valley, saw a raptor flying overhead - my son tells me it is safe to call this lovely soaring bird a "raptor" as it wasn't an eagle, or a raven - although I have seen eagles in the Similkameen, and I have heard that old timers have called it the valley of Eagles.  Probably my most memorable sight of them was a lone eagle,flying in circles above a funeral cortage of an indigenous pioneer of the valley.
Ah, to be young again.
And how much pleasure these memories give me,
- and how much I appreciated this unexpected little drive!!!
On the whole, life is very good!!
Posted by Hildred at 9:59 PM

What a beautifully written piece. It's strange how such small things can trigger a chain of memories. Thank you for sharing them with me this morning.

So nice to focus on all of the happy memories of your life! You described it so well, I could just picture your busy, loving family time! Thanks for your wonderful words!

How nice that you had this outing and that the memories evoked were pleasant ones. Returning to a once familiar area can be a bit unsettling--we understand the passing of time and the changes that occur, but sometimes we want to hold on to things as they were.

So glad you could drive with your son and see the sights that brought back these memories.I remember when you used to post about drives that you and Charles took. So happy that you're well, Hildred, and enjoying life's pleasures.

Thank you Barb - so nice to hear from you!

Being self isolating for all this time, a drive out is wonderful I agree.