The Letter of the Week is P for Penticton

I had thought this week we might leave the southern parts of B.C. and visit Prince George, the third largest city in the province, and proudly known by its inhabitants as the Capital of the North......

However, the lovely city we reach as we traverse the Yellow Lake Pass, the land that Charles' grandfather came to in 1911 after twelve years transfixed by the Alaska Gold Rush, bequiled me into telling you a little more of Penticton, the "place to live forever"  (snpintkin) as interpreted by the First Nations Syilx Indian Band who have occupied the territory from time immemorial.

This was the theme of the 75th year celebration of the incorporation of Penticton as a City, and Charles' father, celebrating his 100th birthday at the same time, was honoured in the Peach Festival parade and banquet. (forgive the quality of the photo) Here, with his children, Charles and Nonie. 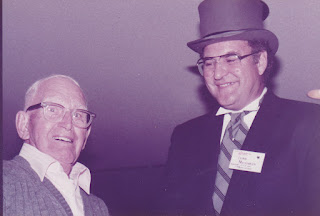 In the very early days the quickest way for fur traders to get their pelts to the world market was to head south on horseback through Penticton to the Columbia River.  Tom Ellis, a young Irish immigrant and  cattle rancher, was the first non-native to settle the area in 1865, buying land that stretched from Naramata to the Border, and the City of Penticton was built on some of the 31,000 acres he held in the South Okanagan between the Okanagan and Skaha Lakes.

Development in the early years was slow, but by 1908, with six hundred souls resident in the district, Penticton was incorporated and continued to grow at a fast pace.

Some early pictures.  The SS Sicamous on the lake in front of the CPR dock, the Kettle Valley railway Station, the school Charles attended, the B.C. Hotel with patrons on horseback - I believe this to be the hotel which later earned a rather infamous reputation as home to Slack Alice's  Strip Joint, but perhaps that was the Valley Hotel - in any case, above this picture is the Incola, the hotel the CPR built where we danced away Saturday nights to Saxie DeBlass's orchestras in those first years after the war.  Above that is the Aquatic building, which, of course, served the annual aquatics as well as the first Teen Town in British Columbia - dear to the hearts of Penticton natives of that era. 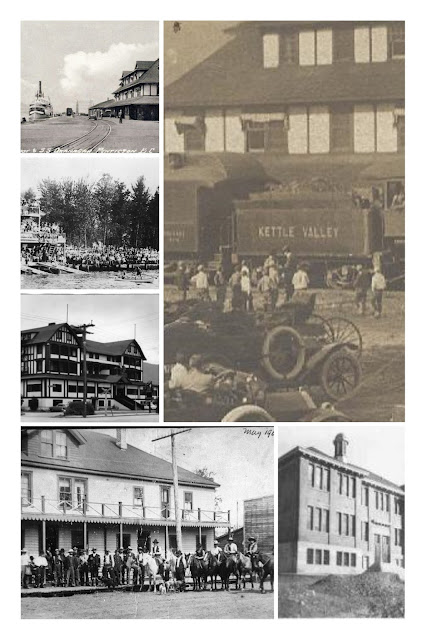 and here are some of the first orchards, and Front Street, then and now, and now it has the Dream Cafe which is a wonderful place to visit, both for dining and for entertainment.  I am waiting for Leon Redbone but he keeps cancelling... 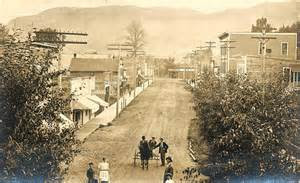 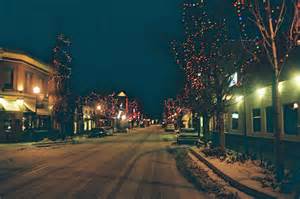 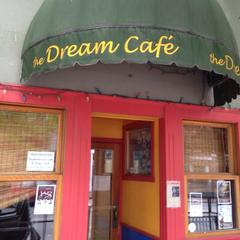 Penticton has always charmed me, ever since a dear friend went there to recuperate (when I was a child) and it sounded like such a pleasantly mysterious place.  Of course its charm increased considerably when I met that handsome airman from Penticton, out for a stroll one Easter Sunday from the RCAF station at the University.......and thereby hangs a tale!!

Because of the difficulties of land travel due to the rugged local terrain along Okanagan Lake ( which runs for ninety miles from the southern end to Vernon, at the northern end) early transportation in and out of Penticton was primaily by water aboard steamships like the SS Sicamous and the SS Okanagan

The Sicamous is today docked just off the beach, at one end of Lakeshore Drive and is used
for banquets, wedding reception and such.  It is well preserved and still holds
a great deal of charm and appeal. 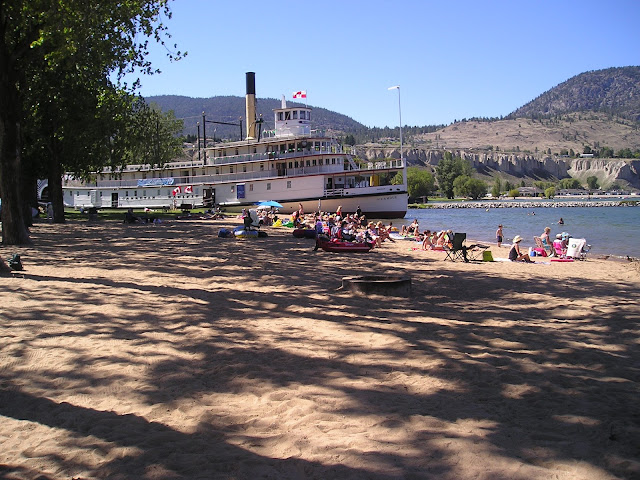 What can one do in Penticton - a picture is worth a thousand words.... 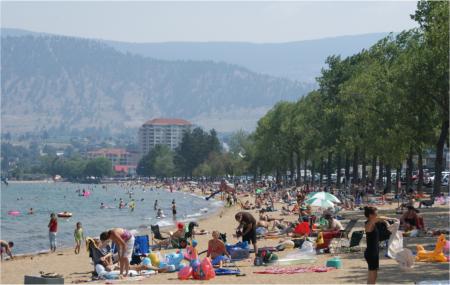 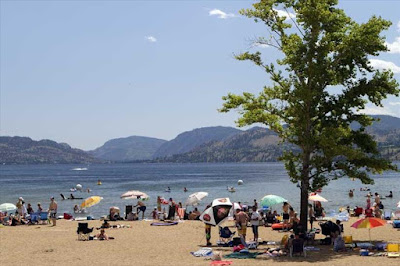 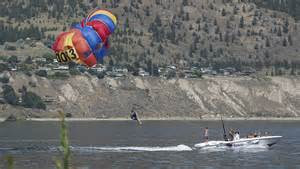 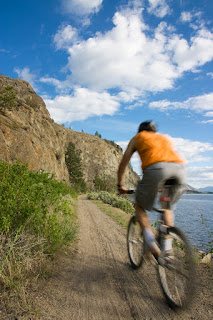 Swimming, para sailing, cycling on one of the many trails, and
on the Kettle Valley Railway Trestle route which stretches from Penticton to Kelowna (or vice versa depending on which city you come from...) through the Mara Canyon.  Eight of these twelve  heart catching trestles were destroyed by fire a few years ago, but have been replaced by the government of B.C., and are still popular and adventurous. 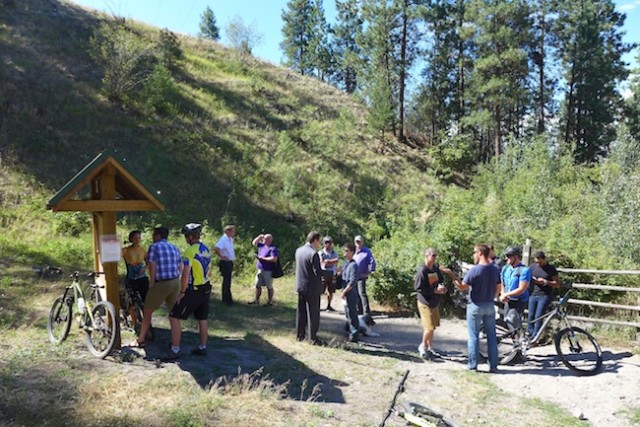 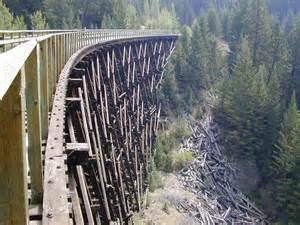 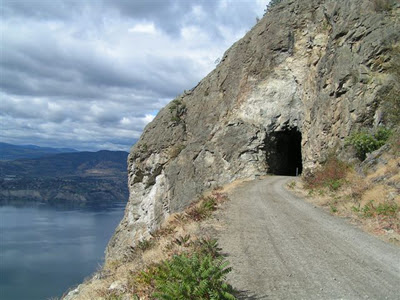 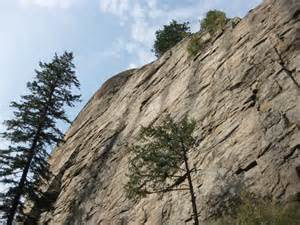 Munson Mountain, more sedate but precious in my memory as the place Charles and I
became engaged when I was home with him on his embarkation leave..

and who could resist lazing down the Okanagan river between the two lakes
on an inner tube......? 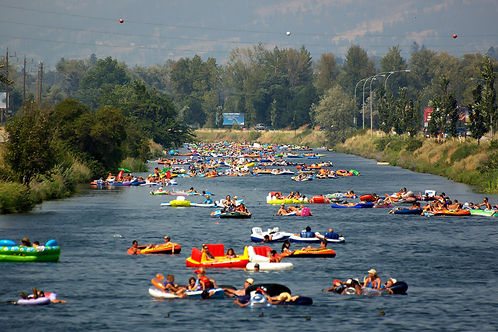 The place abounds with Festivals from May to September

The Okanagan Wine Festival, the Peach Festival,  the Meadowlark and
Okanagan Fest of Ale.

Agriculturally the land around Penticton and Naramata was traditionally orchards -
apples, peaches, pears and cherries, and the main festival was the Peach Festival,
but now vineyards and wineries predominate and it is difficult to find a
picture of an orchard, unless you have taken it yourself.

But they still have a parade! 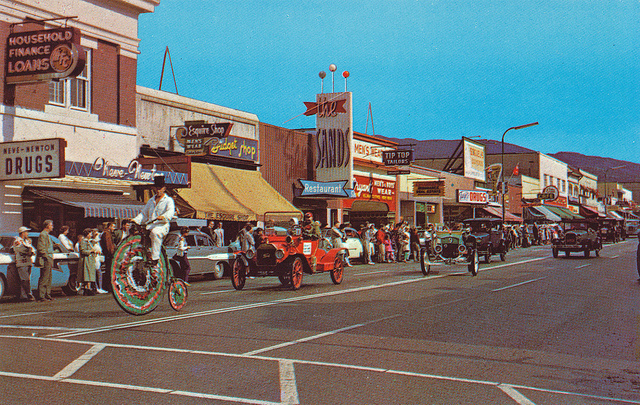 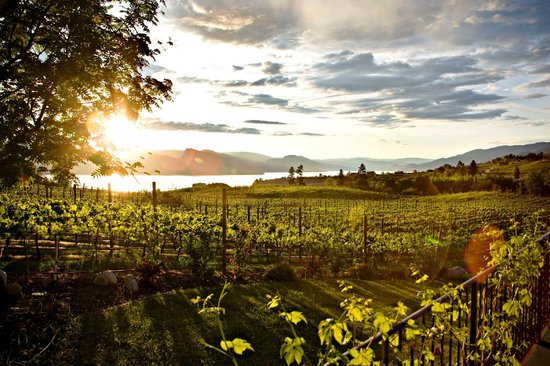 If you come in the winter you can ski at Apex, just a few miles away.

This southern end of the Okanagan valley is very beautiful. 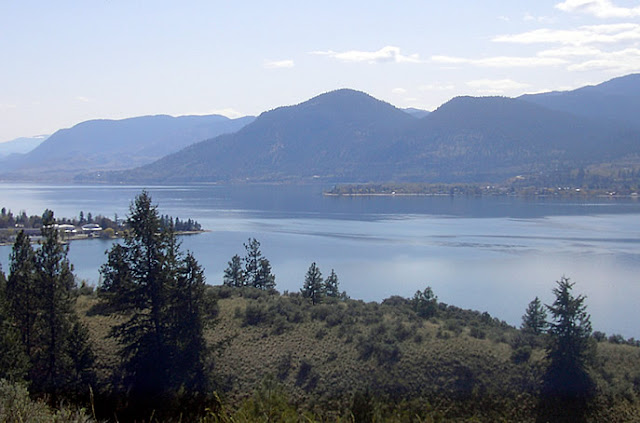 How to get there?

Come and have tea with me in Keremeos, and then just take the Yellow Lake Pass

For more Ps visit here at ABC Wednesday
with thanks to Denise and Roger and their peerless helpers.

What a wonderful place this is! Thank you for haring and... Inviting us for a cup-a-tea! I wished I could do that!
Thanks for your kind comment. I read your life story. So difficult to loose your husband after such a long time being together. I find you a brave woman and it's good that you continue blogging and telling the memories of your life.
Have a great week, Hildred.
Wil, ABCW Team

Oh Hildred, how I love all of this and how it makes me wish to return to your beloved country.

What a lots of wonderfull photographs and nice story to go with it..
I like getting to know places all over the world in this meme.. and if nature is around i am extra happy!

I understand that your life is not that easy but i do wish you all the best!!

Impressive presentation, and rather moving...

What an awesome post about Penticton! I've been there so many times and never thought about its history. It's a beautiful place and I have beautiful memories of swimming in the lake and picnicking on the beach with my family during many wonderful summer vacations.

a P palace is for all here, have fun today.

That is very interesting.
I like knowing about new places.
Happy ABCW!

Thank you for sharing such beautiful memories with the Love of your Life.
This really looks like a wonderful place.
I like how you intertwined your photos with newer ones too.

what a beautiful town and the crowded river is such a joyous sight to behold.

Wonderful images and information.
Great to know about this place.

You make it sound such a romantic place and it looks that way too.

I just had a friend suggest that I take a road trip through this area because it is so beautiful. And from your pictures it's true. We ended up using our nice October weather to stay home in Powell River, another beautiful spot in BC. - Margy

What a wonderful post about Penticton. It makes me want to visit some day. I was wondering if the recent fires in the Okanagon area got up to Penticton this year. Have a wonderful weekend.

Oh how I would love to act on your last paragraph -- a wonderful way to get there! Loved the pictures and history of this charming town -- even more special to your readers because of your personal connection and pictures. I've never seen that many rafts in one place in my life.

I'd love to hear more about the 'thereby hangs a tale' -- if you have already written about how you and Charles met either it was before I was reading you or I have forgotten (the latter is certainly possible). Also .... fires destroyed eight of those trestles? That must have been a terrible year. Glad BC is rebuilding them.

Sallie, my last posting in my 'Refelctions' blog (posted about two years ago) starts the tale. I must get back to it....