A rather indolent day.

I woke, enclosed in mist and fog and darkness

These great drifts of snow that engulfed us on the week-end are piled high beside driveways and sidewalks, as folk try to clear a way through.

The temperature rises, and occasionally it rains, and then freezes.

My son, on the Chilcotin Plateau, told me last night that there were at least five levels of ice buried in the snow drifts there, which makes snow removal by hand treacherous on the heart and muscles, but not too bad if you have some heavy equipment handy (which they have). 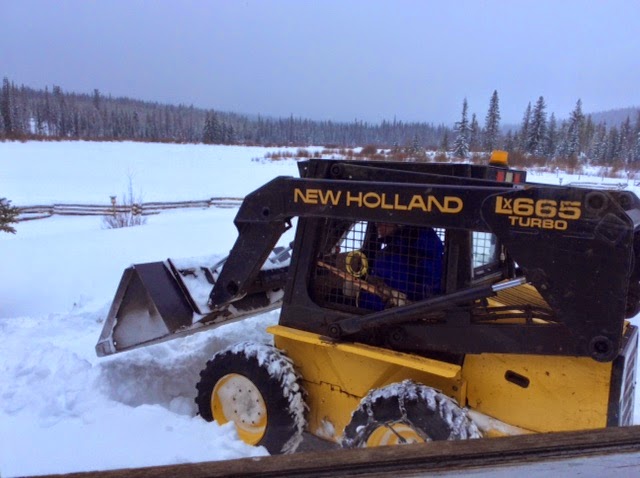 I have a video to show you just how easy it is up there in the Caribou!!  A piece of cake.....

I spent the first part of the morning devising a makeshift bird feeder that I could hang from the railing on the porch, there being too much snow for me to reach the regular feeders which now look like a cross between a ski chalet and an asian pagoda.

A long length of linen from my weaving stash and a deep aluminium pie plate that I could use the hole punch on, and the little birds were once again frequenting the food bar.

That finished, the fog began to lift a little, and as I had mid-morning coffee
I could see trees on the mountain, outlined faintly.  The air a quarter of a way up the mountains
is a pretty blue, but beyond that all is overcast in grey.

The rest of the day I have been spinning. disciplining myself to finish the
brilliant green roving before I start on the last indulgence
at the Naughty  (Knotty)  Knitter, -
a plait of varigated mauves and greens and rose merino that I hope
someday will be a lovely lacy pair of socks.

Wallace Stegner's early book, Remember Laughter,
sits on the table beside my chair along with my knitting,
and so January will idle its way into a February thaw
and eventually Snowdrops and Lenten Roses,

and I will give up indolence and begin to poke around for first green shoots....

I enjoyed the lovely imagery packed into your short essay. January is a waiting time, a time of hunkering down.

Poor you with all that snow Hildred, although I must say your header makes it all look so beautiful
We have no snow here as yet and the snowdrops and tete a tete daffodils are poking their leaves above the ground, as are the lenten roses. They all seem able to take care of themselves if and when the snow comes. Keep snug and warm and enjoy you handwork.

My daughter likes winter and feels that it is part of her natural rhythm -- a time to 'hibernate' and curl up by the fire. (She is about as 'indolent' as you are -- lots of projects going on, just not outdoor work.)

Be careful in all that ice and snow -- unlike you or my dear daughter, I do not love winter at all and am glad not to have to deal with it.